We’re Here For The Soccer 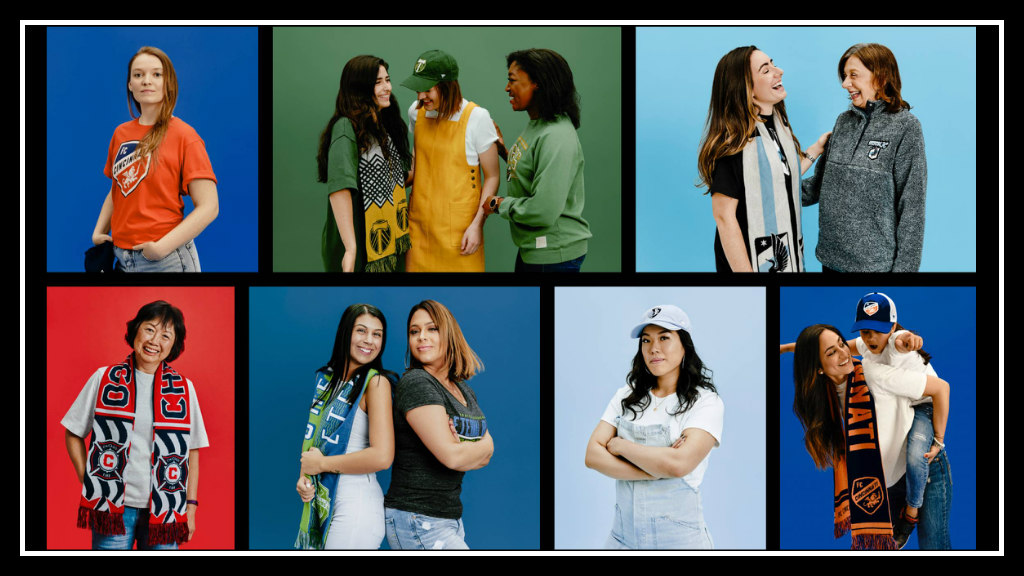 Women are here for soccer, representing an influential 42% of Major League Soccer’s fanbase. We attend matches, we are season ticket holders, we are leaders in our supporters’ groups; we promote and share the sport we love.

Recently, SeatGeek, Official Ticketing Partner of Major League Soccer, developed and released a research report entitled, ‘We Fan’. In cooperation with MLS, the ticketing company sent a survey to 300,000 fans to better understand both their ticket purchasing behavior and how to improve their fan experience. From a diverse group of 1,200 respondents, SeatGeek identified a few of the ways female fans want MLS to recognize their presence.

According to the ‘We Fan’ study, female fans #1 request is to be featured in advertising, representing their legitimate status as soccer fans. One of SeatGeek’s respondents said, “Market to us not as moms or wives, but as fans.” In response, SeatGeek will be turning the spotlight on female fans through a ‘We Fan’ advertising campaign, created by an all-female crew.

SeatGeek’s ‘We Fan’ study is an important step in amplifying the voices of female fans and celebrating their presence in soccer culture, but the work is far from over.

We Wanted to Ask… You

Our passion for soccer runs deep at MLSFemale. We are a group of all female journalists, who are first and foremost supporters of our teams and the vibrant communities surrounding them. We asked our readers, followers, and staff to share their experiences as female fans with us.

It is a privilege to share their insightful responses with you, as they discuss assumptions, representation, inclusivity, community, and why we need women’s cut authentic jerseys.

On Assumptions: We’re Here Because We Want to Be

“Treat me with the assumption that I am there because of my own decision. Often, people assume that you are there with a boyfriend, husband, significant other, kid who plays soccer, etc. There isn’t this acceptance, still, that a female loves the sport enough to show up on her own will.”

“I haven’t had a problem as a female who’s a fan, though most people think my husband got the tickets and I tag along (I got him into the team).”

On Why Representation Matters

“When we say we want more representation, I think we’re talking about a lot more than putting women in ads. The way you treat the women and women-presenting folks working for you is far more convincing than an ad campaign could ever be.”

“I think it’s important to highlight that many MLS fans are women and we support this league just as many men do. I have never given up on the team and I never will.”

“I personally think that D.C. United does a great job of knowing their fans are not just men, and have a wide variety of merchandise, advertisers, and I’ve always felt welcome at the games.”

“League wide, I think they should focus on having more female coaches, trainers, and commentators. As we all always say… representation matters.”

“I think one thing that could really improve the experience is if the local broadcast teams had more female pundits. When you are watching a sport and everyone who is commenting on it are men, and then you try to have a conversation with someone… I feel like I get taken less seriously because of my gender. The biggest thing for me that I think the MLS can do, is to hire more females, have them be more visible, and that would make the fan experience better.”

“I feel that Minnesota United and the Dark Clouds are very welcoming, and my experience has been overall really positive. I can speak for myself when I say that a few years ago I couldn’t see myself being as heavily involved with Dark Clouds as I am now. I think it helps that there are quite a few women that are in prominent roles in the Dark Clouds, like capo.”

“There definitely could be more representation in marketing at the fan level. By this, I mean, let’s show solo females. I don’t want to always see a female with family or with a male in a marketing sense. Instead, celebrate the women who work in your front office, celebrate the fans, and make this about females who are contributing to the soccer culture in your community in a positive way.”

“It seems pretty clear that MLS is marketed to men as a primary audience and women as a secondary audience. One example: It’s been challenging to find a women’s jersey that doesn’t have a deep V-neck cut. Like, I don’t want to be a sexy Timbers supporter. I just want a shirt that fits.”

“One gripe I have is that the “fun” merch is always in men’s cut. So-called “unisex” t-shirts look awful on me, but all the merch that’s more amusing (like the pigeon shirts) tend to only be in men’s cut.”

“There is something I’ve been saying from Day 1:  CAN WE PLEASE HAVE AUTHENTIC FEMALE CUT KITS?!  I get that they would be naturally less “authentic” because the players wearing them are males, so the authentic kit will be the male cut.  But I’d love a female cut kit with the special touches – the 4 stars denoting our championships and the button-down neckline.”

“I think they should change the marketing and fit of their women’s jerseys. Not everyone wants a deep neckline.”

“Orlando City as a club are very inclusive of female fans in my experience. Kay Rawlins who is the co-founder of Orlando City is the pioneer and epitome of female inclusion within the team. She is a well-respected part of Orlando from both myself, male and female fans alike. Kay has a very hands on approach and is very visible to the fanbase, interacting with fans on social media and outside of games.”

“Kay is also very supportive of inclusion of [those with] disabilities and LGBT [community] as well. I feel like having a founder with her way of thinking and views, has created the feeling of inclusiveness regardless of your gender, sexuality, religion, age or disability, which is why I love this club.”

“The best part about my supporters’ group and my team is they don’t see gender, orientation, race, ethnicity, or age. We all bleed black and red, and that’s all that matters.”

“The stadium has an indoor fan area with…TVs showing the match. It was always used as a room for breastfeeding babies.  That’s a great example of inclusivity for women. I didn’t have to choose between being a mom or a supporter because there was space for me to be both.”

“It was a Pride Night match. There were rainbows everywhere and I mean everywhere! They were handing out rainbow flags to every single fan. And nobody was declining them or using derogatory language about them. The second I saw our (then) captain Brad Evans step out onto the pitch with a rainbow armband I felt like I had finally, after years of being a sports fan and always leaving because of homophobia, finally, found a team and possibly an entire professional sports organization where I could actually feel welcomed and belong.”

“I appreciate that the Sounders not only didn’t balk at partnering with a “feminine” sponsor like Zulily but have embraced it. I appreciate the no-nonsense approach to handling complaints about pink kits and players wearing ‘sports bras’ for analytics. The more they treat this stuff as normal the less stigma there is in being ‘girly’.”

On Building a Community

“What I would like to see as a woman, are more women looking to connect with other women. I seriously don’t know any women that go to games alone like I do most of the time and I end up connecting with the guys. It would be cool to have content that connects us in some way.”

“I’ve actually connected more with the team and the fans because of the away games that I’ve been able to go to; specifically speaking, Angel City Brigade, one of the Galaxy’s SGs, have welcomed me with open arms. I would’ve called myself a lone die-hard fan that traveled to games, but now I’ve found that I’ve made so many friends through traveling to these games.”

Author’s note: I would like to thank every reader, follower, and staff member that took the time to respond when I asked for your thoughts. Your insight, strength, and willingness to share has me in awe. This is truly your article, and I am proud to share your story.