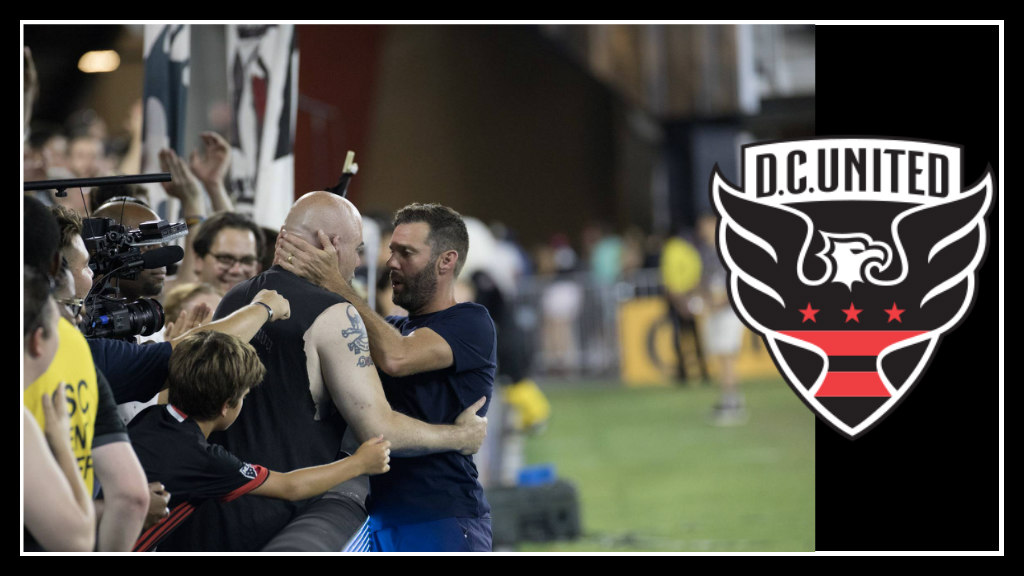 Audi Field just turned a year old this past week, but one of D.C. United’s most ardent supporters only recently passed through the stadium’s gates for the first time. 96’er and Barra Brava elder, Rob Gillespie, finally made his way home. Affectionately known in the Black-and-Red community as ‘Big Rob’, Gillespie has been a fixture in the D.C. United community for over 20 years, his story woven into the fabric of the Club’s history.

Rob remembers the beginning of D.C. United. A gifted storyteller, he is able to transport his listener back in time with tales of Lot 8 and a young Ben Olsen on the pitch. Now, there are no more tailgates in Lot 8, and Ben Olsen has become United’s head coach who is shaping the future of the team. However, some of the original 96’ers, like Rob, remain; preserving the traditions they can and sharing the past with a new generation of supporters.

Becoming a part of the Barra Brava happened by chance, with a fight between Rob and Barra founder, Oscar Zambrana, resulting in their friendship and him joining the group.

Then some people pulled us apart, and were able to explain to Oscar… I was trying to explain to him while we were fighting… that I was actually on his side in this thing. Then about 10 minutes later he came and grabbed me and dragged me down into the Barra and I sort of stayed ever since.”

Despite his long relationship with the Club and testifying in front of the D.C. City Council in an effort that ultimately helped win the permission for the construction of D.C. United’s new home, Rob had never visited the Stadium at Buzzard Point. A 2012 diagnosis with a rare form of Leukemia upended Rob’s life and he was eventually forced to move out of the area due to the financial strain; leaving the District before Audi Field ever opened its gates.

After years away, Rob finally came home to D.C. and on July 12th he headed to Audi Field to see his team, D.C. United, face off against the New England Revolution.

Rob’s first reaction to seeing Audi Field was one of almost disbelief, as he saw the long-awaited new home of D.C. United.  He said, “It was surreal, to turn down Third Street and see the stadium for the first time. Finally, it was there, after all those years.”

Although happy to see a new home for D.C. United realized, Rob felt that something was missing. “I share Bruce Arena’s disappointment that there isn’t more connection with the past. That’s something I noticed right off.” Rob said.

Accompanied by his sister, Aryka, and his son, Marco (named after Bolivian and D.C. legend, Marco Etcheverry), Rob was in for a warm reception. He said, “it was just a great experience, definitely a coming home, even though we live in a new house.”

“It was amazing. It really was. I went to training on Thursday. I’ve been friends with Ben and Dave Kasper for almost 20 years, and I got a good chance to talk to them and see them. Ben made sure all the players came over and said hello. I don’t know most of them, so they introduced themselves. I went up into 130 to see Marco’s aunt and uncle, and that’s where a lot of the old-time Screaming Eagles are at and people clapped when I went up there. I was completely overwhelmed by that… It was just one old friend after another.”

While Rob spent the match alongside the Barra Brava and friends he hadn’t seen in years, his family were guests of local medical practice and D.C. United official oral surgeons, Fairfax Oral and Maxillofacial Surgery (FOMS), in their suite. Prior to Rob’s homecoming, FOMS had taken to social media to auction off suite tickets in support of his treatment.

At halftime, Rob made his way to the FOMS suite to check on his son and thank those who had participated in the auction on his behalf. Dave Johnson, play-by-play announcer, and legend in the D.C. sports scene was there to greet him. Having known each other for years, Dave wanted to show his support by spending the match with Rob’s family and some of the community who had come together to support him.

D.C. United took a draw against Bruce Arena’s New England Revolution, finishing the match 2-2. Even after dramatics on the pitch worthy of an Oscar (Quincy Amarikwa’s stunning goal, anyone?), the Black-and-Red were unable to secure three points at home.

Ben Olsen, who Gillespie has watched play (and now coach) since he was a young man, came over to greet his old friend.

“Ben came over to see me at the end of the game and, he had tears in his eyes. And he said, ‘God I wanted to get that win for you. I’m so sorry.’ I said, ‘No man, it was great. A great comeback. I’m really happy.’”

“I wasn’t happy about the unpleasant little thing that happened.” Rob said, referring to those who chose that poignant moment to begin chanting ‘Olsen out.’ “I thought it was disrespectful. Ben’s done as much if not more than anyone to build that house, that beautiful stadium that we have… That was a really special time for me and him. I would have rather they said [something] about me than about Ben.” Rob continued, “I don’t think it’s wrong to criticize somebody… There was a place and time for that kind of criticism. But that [the stadium] was not the place. Especially not for someone like Ben.”

Gillespie wasn’t alone in his criticism of those choosing that moment to voice their disapproval of D.C. United’s coach. Supporters took the offenders to task on social media, calling them out for their poor timing.

“We always had a rule or a policy within the Barra Brava where we did not boo the team, we didn’t do any of these negative things in the stadium, it wasn’t the place. That was the place for 100% support, win, lose, or draw.”

Rob believes, “There is no better way to get rewards than to give.” After years of serving the community he loves, Gillespie is now the one in need of help.

“My life is a perfect example of that, I always tried to give. I never thought I would need any help. Look at me now, I’m still alive in large part because of my relationship with D.C. United. I could not raise the money I need for cancer treatment without that relationship.”

With his out of pocket cancer treatment costs totaling between $3,500-5,000, plus travel, each month, Rob has come to rely on his community – his D.C. United family, to help him raise the money he needs to stay alive. “The people that support me day in and day out, week in and week out, they are D.C. United people.”

While Rob’s cancer is rare and incurable, treatment is helping to extend his life. As a single father, Gillespie is driven to continue fighting cancer to have more time with his son, Marco.

Sometimes, help comes from unexpected places. Just last year, “out of nowhere, Jozy Altidore donated $1,700. This is a player I’ve had no connection with and that just really gave me a little bit of breathing room. It really helped.” Rob said.

Of course, “the ideal situation is that you wouldn’t have to do this at all and could just focus on getting healthy.” Rob has had to conduct constant fundraising since he depleted his $900,000 savings and proceeds from the sale of his house. Gillespie calls the process, “humiliating and extremely stressful.”

Even through the hardships, Rob remains positive and committed to the D.C. United and Barra Brava family, the same family he credits with keeping him alive through their fundraising efforts and sharing his story.

“You can never go wrong by thinking about D.C. United or the Barra, or the Screaming Eagles, or whomever as a family. You want to show that love and respect and put in that work that you would in a family. Care for your brothers and sisters who are at your side. That’s really important.”

As Rob continues his battle with cancer, the D.C. United family remembers how much he has given to our community, and we all stand with him, united.

Author’s Note: If you would like to support Rob Gillespie’s fight against cancer and help him pay for life extending treatment so he can continue to be with his son, please donate! ‪