The yin and the yang of NYCFC vs Colorado Rapids 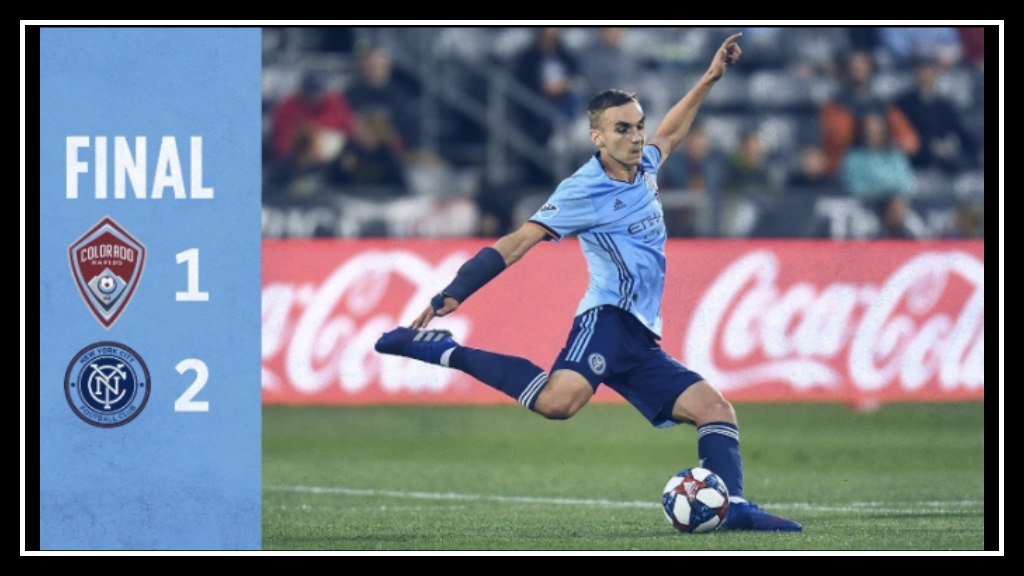 In last night’s Rocky Mountain duel versus the Colorado Rapids, New York City Football Club came away with the 2-1 win. It was not an easy result.

The team, near full health with Alexandru Mitrita, James Sands and Héber returning to the lineup, dominated possession with a continuous onslaught of attacking chances on Colorado and yet had a hard time with finishing. The match was filled with dualities which seemed to both hold the victory a bit out of their grasp and yet also paved the way for them to walk away with three points.

Many New York fans were eager to see Colorado’s Jonathan Lewis face off against his old teammates.  Lewis has been a welcome addition to the Rapids with his speed on attack and was the player who orchestrated the first goal of this match.  Lewis easily sped past Sebastien Ibeagha and fed the ball to Sebastian Anderson who buried it in the 6th minute.

There was definitely a sense of poetic justice for Lewis as he struggled to gain playing time while at NYCFC.  Minutes later, 16-year-old Anderson was shown a red card on an apparent studs up tackle on Ronald Matarrita.  The highs and the lows of soccer seemed to happen within minutes for Anderson.

Rapids played down a player for most of the game but were able to defend well against NYCFC who just could not finish.  Colorado was up 1-0 until the 40th minute when Héber put one in on a ball by Maxi Moralez.

From the television camera angles, Héber looked off side but the goal stood and the game was level.  Although NYCFC continued to dominate, they struggled to put the last piece into the offensive puzzle until Mitrita came in and they found their missing attacking element. Mitrita converted the goal that fans were salivating for in the 83rd minute.

Oh, and did I mention that Colorado Rapids had to utilize their backup goalkeeper Clint Irwin for half the match as Tim Howard went out with a strained calf?

In theory, this should have been a easy and decisive victory.  Despite being down a player, Colorado continued to park the bus in front of their goal with occasional attempts to counter attack.  These counter attacks were particularly scare-inducing during the last 10 minutes when almost the entire NYCFC team was above the half line.

Perhaps the referee gods were on the side of New York City during this match.  There was the early Colorado red card, the lack of off side calls and a lenience by the referee on players like Alex Callens, who elbowed  off the ball on the edge of the box in extra time.   Was all of this karma for last week’s “Throw-in Gate” versus the New York Red Bulls? We will never really know.

Next test for NYCFC is at home versus a bruised Sporting Kansas City on Friday 7/26.