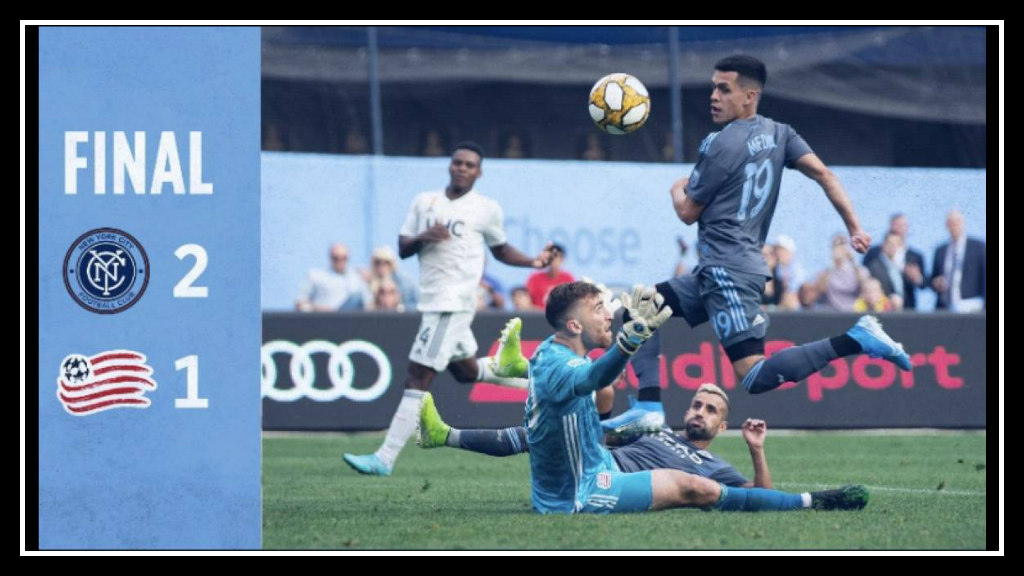 Walking into our seats tonight, our friend, a row over said “This is going to be Jesús Medina’s night.”  We laughed, winked and then commiserated about missing players due to international duty.

If you have been following New York City Football Club over the past two years, you are aware that one of the Designated Player spots is occupied by Medina, a now-22 year-old Paraguayan forward who frankly, doesn’t play very much.  There are many theories as to why he has produced paltry goals or assists since his signing in 2018.

Going into this match versus New England Revolution, NYC was down a few key pieces of its regular attacking regiment due to international duty (Ronald Matarrita) and injury (Héber).  The team also went into the game without its regular starting goalkeeper Sean Johnson, who was called up to the US Men’s National Team for international friendly matches.

The match was a strange brew of yellow cards, a red card, an early goal, late use of VAR and very uneven possession.  City was down a goal from 2 minutes in and then was up a player from the 7th minute due to a red card ejection for New England’s  Antonio Mlinar Delamea. But City just could not finish.

NYCFC did not look like a team that was up a player for much of the game as the Revolution defended extremely well and goalkeeper Matt Turner had quite a game of beautiful saves.  Nobody would have predicted that the most important substitution of the match would be in the 60th minute, when Jesús Medina came in for Sebastien Ibeagha.

This substitution reinvigorated the attacking efforts of NYCFC in the middle and attacking thirds of the field.  Ten minutes later, Medina was able to bury a ball into the back of the net, his goal leveling the game. In stoppage time, Medina successfully executed a penalty kick to seal the deal for a NYCFC victory.

I was not only happy for the win for the obvious reasons but also because another City player who was called up for international duty, defender Maxime Chanot, found a way to push back his date of reporting to the Luxembourg National Team until after he played in this game.  Chanot made his life a bit more complicated for the good of the team and his strong play in this match was necessary and much appreciated.

No matter how much chaos, luck, and uneven calls by the officials contributed to this victory, the player who stepped up big is Medina.   He delivered when the team desperately needed it and can consider himself back in City fans’ good graces.  More importantly, our friend Luis can call himself a psychic.