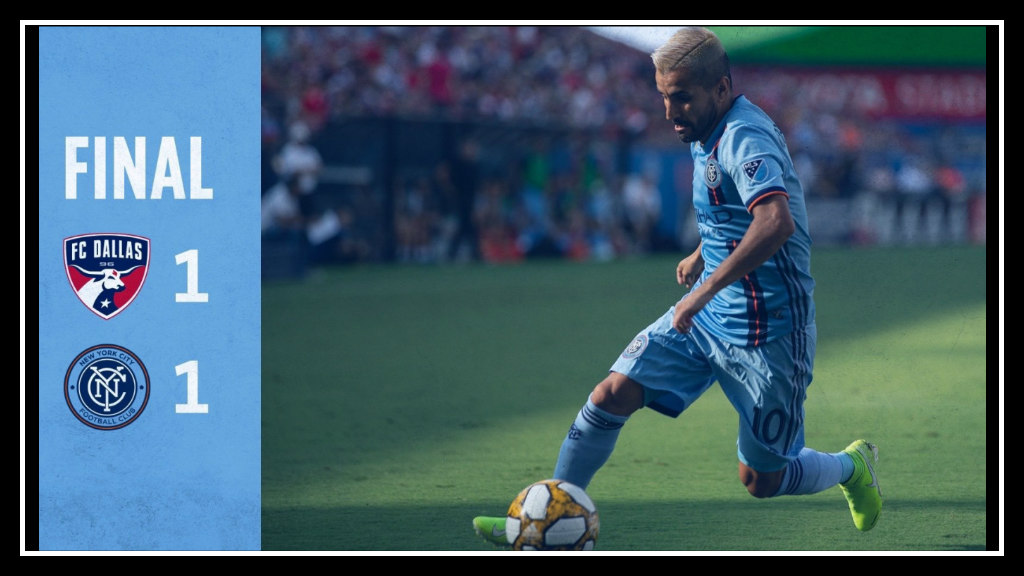 If you look at the match statistics it doesn’t look that bad, but boy was yesterday’s New York City Football Club match against FC Dallas an ugly one.

First, let’s give kudos to Taty Castellanos for scoring the quickest goal in the club’s history, bagging one off a cross by Anton Tinnerholm 39 seconds into the game.  NYCFC did manage to continue with consistent possession in the attacking third for the first quarter of the game.  Those are the positive takeaways from this match in their entirety.

One could argue that City was exhausted from a tight match schedule and unaccustomed to playing in the 90 plus degree heat. Whatever the cause, the team for most of the match looked uncharacteristically like laggy video game players with legs made of lead.

The game was leveled by a one-touch Zdenek Ondrasek rocket which was given to him on a proverbial platter via a sloppy defensive play by Alex Ring. The result should have been a loss if not for poor finishing by Dallas and by goalkeeper Sean Johnson being virtually flawless. Looking back, it seems that once Tinnerholm came off with a potentially serious head injury, everything seemed to fall apart.

Soccer, as we all know, is a dangerous sport with the potential for a slew of injuries, but to me the scariest are the head injuries.  Watching the collision between Tinnerholm and FC Dallas’ Brandon Servania was painful. Even more horrifying was that they were both sent back out on the pitch almost immediately.  Neither could continue after a few minutes and fortunately were self-aware enough to say something.  You could hear Tinnerholm saying that he couldn’t see well and his facial expressions fluctuated between blank and confused.  And the hits just kept on coming with Alex Callens uncharacteristically going down after a ball was driven at his head and then Tony Rocha’s head being looked at after a collision.

I’m clearly not a medical professional, but I am aware that a lot of progress has been made in the early diagnosis and treatment of concussions in youth sports.  Long gone are the days when coaches believed that their young athletes could tough it out through a head injury, probably due in part to the press coverage of the traumatic brain injuries of NFL players.  I just can’t understand why the same respect is not given to MLS players.

Everyone should want to protect their players’ heads and it seems that there could be some simple steps that the league could take to err on the side of caution when dealing with potential concussions:

1- The medical staff needs to take a lot more time in evaluating a possible concussion. In many cases, symptoms don’t show up immediately and putting the athlete back into a physically and mentally taxing environment will exacerbate the brain injury.

2- The three substitution rule should be waived for goalkeepers to be properly assessed for concussions.  This position is particularly vulnerable and medical staff needs time to assess it.  Currently, they rush through this as the keeper would need to be subbed out and replaced,  unable to return to the game if he is cleared.  A backup keeper should be allowed to play while the starting keeper is tended to.

3- An additional 4th substitution should be available for field players if both teams’ medical staff and the referee agree (without input from either coach), that the player needs to be evaluated for a concussion.  If the player is tested more throughly over a longer period of time and is cleared to return to the game, the player’s “concussion sub” comes out and cannot be used again in the match.

We currently don’t know the status of Tinnerholm’s injury but it should be treated with the same urgency and concern as any other physical part of his body.  The team may need to learn to play without him in order for a full recovery.

Next up:  How will this shaky performance impact NYCFC’s must-win match on Wednesday versus a closely trailing (only four points!) Atlanta United?