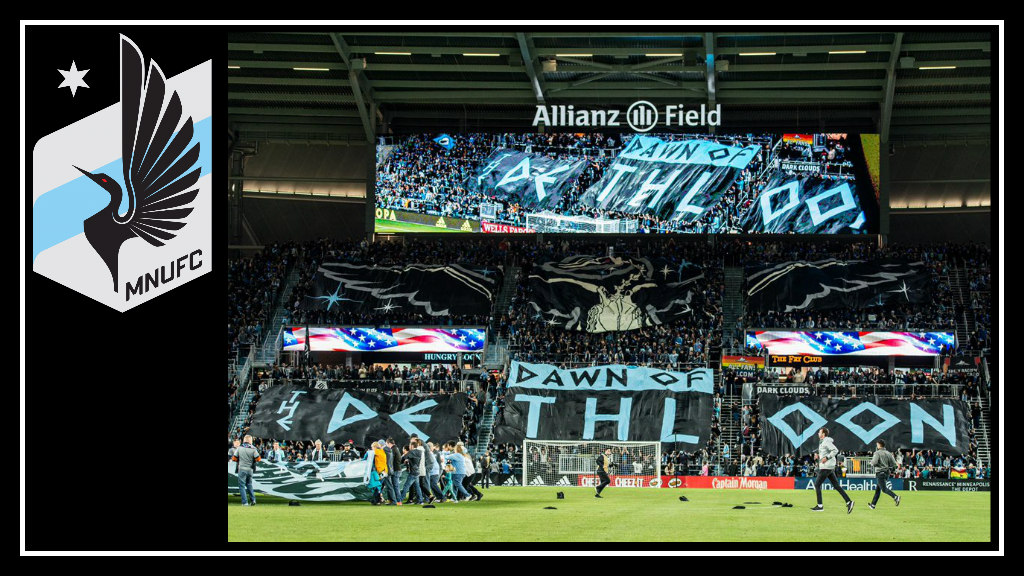 While its quality on the pitch was not all that Minnesota United’s fans hoped to see in its first MLS Cup playoff match, the Loons put on a show on Sunday that helped the fans celebrate a new era in Minnesota soccer. Of course, the fans put on quite a show themselves.

For thine is the Wonderwall

The Dark Clouds’ pre-match meetup at Black Hart of St Paul, just two blocks from Allianz Field, is always full of a mix of nervous energy and excitement. As old and new friends caught up and traded predictions, filled up on cheap beer and warmed their voices for 90 minutes of singing, they also paid their respects to some of the pillars of Minnesota soccer.

Behind the main bar at Black Hart is an eclectic collection of art. Portraits of Buzz Lagos (legendary Minnesota Thunder coach) and Brianna Scurry (the USWNT goalkeeper is a Minnesota native) are flanked by prayer candles with the faces of two former Loons players, Jérôme Thiesson and Ibson, pasted over the saints’. An altar of living saints.

Sunday evening’s pep talk from DC board members concluded with a prayer to these legends, these ‘saints’ of Minnesota soccer. David Zeller shared the prayer in its entirety* on Twitter:

Our Ibson who art in heaven, hallowed be thy name. Thy Thiesson come, thy will be done on earth as Scurry saves it. Give us this day our daily Lagos and forgive us our back passes, as we forgive those who hand pass against us. Lead us not into temptation, but deliver us from Unkel**. For thine is the Wonderwall, the power and the glory, for ever and ever. Go Loons.

*MLSFemale editors have omitted an add-on line to the prayer. You all have Twitter anyway.

**There would be no deliverance from Unkel this night.

Wonderwall’s tifo committee had to shelf a number of tifo ideas this season due to the loss of a temporary build space and unforeseen deployment issues in the new stadium. But with a new space secured toward the end of the season, the committee could actually plan ahead. In the short span between the regular season finale and Sunday’s playoff match, volunteers built six tifo panels, totaling 7,200 square feet.

“We started our call for volunteers the week before our final game of the regular season. At that point we were long odds to miss hosting a playoff game,” explained committee chair David Martin. “I had ordered fabric about a month prior, knowing this possibility was on the horizon and that it takes weeks to get my fabric from Germany. We also had been working on these design in the background since the beginning of the season, and so we were able to pull it out of the file and execute it much more quickly than if we’d started a new concept from scratch.”

In fact this design may never have seen the light of day if not for the home playoff game. A number of issues (funding, build space, deployment complications at the new stadium, etc) saw the committee complete just three of five planned tifos.

“I thought this idea was dead,” said its designer, Scott Demeranville. “It was David who suggested we go back to the idea, but we thought it was going to be for the last home game of the season against LAFC. Practical issues delayed it further.”

Martin estimated that committee members and volunteers put in roughly 500 work hours to compete the display in a record time of five days, despite limited access to the build space during the work week.

Demeranville sketched the original design, a skeletal loon based on the red-eyed bird of MNUFC’s crest. “The Dethloon is very much in the same spirit as the Dark Clouds name where on the surface it looks dark and intimidating, but it’s actually kind of tongue-in-cheek,” he explained. “It’s a little bit of a parody of soccer supporters who take themselves too seriously. Hence the spelling.”

“It means a lot to me see how much work everyone puts into building and deploying a tifo,” continued Demeranville. “It’s a huge honor to be able to design something that so many people put their time and effort into making a reality. Even though it was fairly boring practical issues that matched this design up with this game, it turned out to be a perfect match.”

We’re just happy to be here

The tifo displayed at Minnesota’s inaugural MLS match — that snowy day when the Loons were routed by fellow expansion club Atlanta United at TCF Bank Stadium — was not just a jab at the other United; it was a plea to never forget, or disregard, earlier chapters of this soccer story. “True unity has history.” From the Kicks to the Strikers, the Thunder to the Stars, the NASL Loons to the MLS Loons… Minnesota soccer fans have seen all the highs and lows.

After two horrific years, the Loons showed vast improvement. In Year Three, the Loons made it to the US Open Cup Final and hosted a first round playoff match. Some fans may scoff when reminded of a traveling fan’s sign, at the club’s first MLS match in Portland, which read “We’re just happy to be here.” No one wanted to hold up such a sign during the loss in Seattle which nearly ended Minnesota’s 2019 MLS Cup dreams. And certainly no one was going to say that to Ted Unkel on Sunday night.

But the evening was full of reminders that Minnesota had finally made it. A halftime light show set to Willy Wonka’s “Pure Imagination,” highlighting the Allianz Field building process and moments from the 2019 season. Video of Loons players visiting patients at Gillette Children’s Hospital. A pre-match concert by the Shredders as the club’s crest was carved from a block of ice. And, of course, the tifo.

Hosting this playoff match wasn’t the very beginning, but in a way it was the culmination of the beginning. The whole season was the culmination of a chapter, but it was still only an early chapter in a long book that is still being written. Things are always darkest before the dawn, but things aren’t so dark anymore. The sun has crept over the horizon, and it’s beautiful now.

Martin concluded, “Maybe the tifo fit the moment better than we planned.”