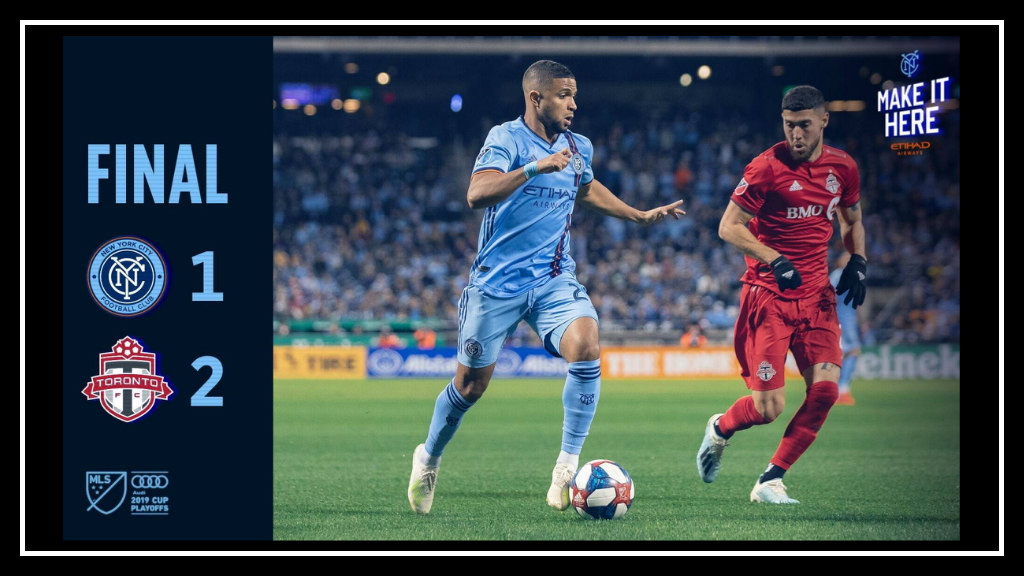 New York City Football Club’s playoff bid came to an end at the hands of Toronto FC on Wednesday night.  City’s “home field advantage” was anything but as the match was moved to Citi Field in Queens.  If you are reading this, you probably watched the game so a rehash of the event would be a real downer; this will be brief.

NYCFC did have a few moments in the second half where they looked like their old selves, but the pace and intensity did seem to come from Toronto.  Toronto came in with confidence while City fans were all wondering aloud when the real Maxi Moralez, the resident playmaker, would make his presence known.   Many things were off about this slide over to the the other city baseball stadium, but it merely puts a spotlight on the elephant in the room:  NYCFC has no home.

The result of the match is heart-wrenching for the remaining die-hard fans.  We stayed to try to help comfort our resident 5 year old fan, Axl, last night as he wept into his father’s arms.  What a scene it became, as behind our group embrace, the sky was raining beer cups.   As Toronto players went to celebrate their victory on the pitch beneath their supporters’ section, from one level above them the angry and bitter NYCFC fans were throwing cups and cups of beer at the players.  It was embarrassing and fed right into the stereotype of what City supporters “are”. This behavior of so-called supporters after the match was deplorable and needs to be addressed as such.

Equally depressing were the online comments and reactions about individual players and their responsibility for the night’s result.  Now, I get that it’s New York and we can love you but will turn on you at any given moment. However, these were particularly harsh and rash reactions, which do nothing but heap more sadness on the players.  These athletes are human beings and they know when they’ve messed up and made mistakes.  They watch them over and over on film.

The only person these comments “benefit” is that keyboard warrior, for that instant.  I get it — fans were excited to continue on in the season — but someone has to lose in the end.  How does grinding salt into players wounds make anything better?  Think about the worst mistake you’ve ever made professionally.  Would you want people tweeting about how much you suck over and over?  What does that actually do?

Again, back to the no home issue.  Sources say that an announcement is imminent about next season and this will basically state that a large chunk of home games will be played at Citi Field.  This may be an attempt to have more home games on weekends as the Wednesday match situation this past season led to very low fan attendance.  However, the patience of NYCFC fans is wearing thin and the loss at Citi Field last night will only make this an even tougher sell.  The seat “equivalents” between Yankee Stadium and Citi Field were anything but, leaving long time ticket holders separated from their groups and, ahem, putting some raucous City supporters in very close proximity to the visiting supporters’ group section.

A lot of work would need to be done by the club to address these issues.  Many season ticket holders have already jumped ship or renewed fewer seats in their package.  When the club was sold to the NYC community it was with the understanding that they would be playing out of a baseball field for about 3-5 years and yet here we are with no end in sight.  Or is this the end for fans?