Tested by Olympic Qualifying, BBVA Stadium Is Ready for the Dynamo's Season 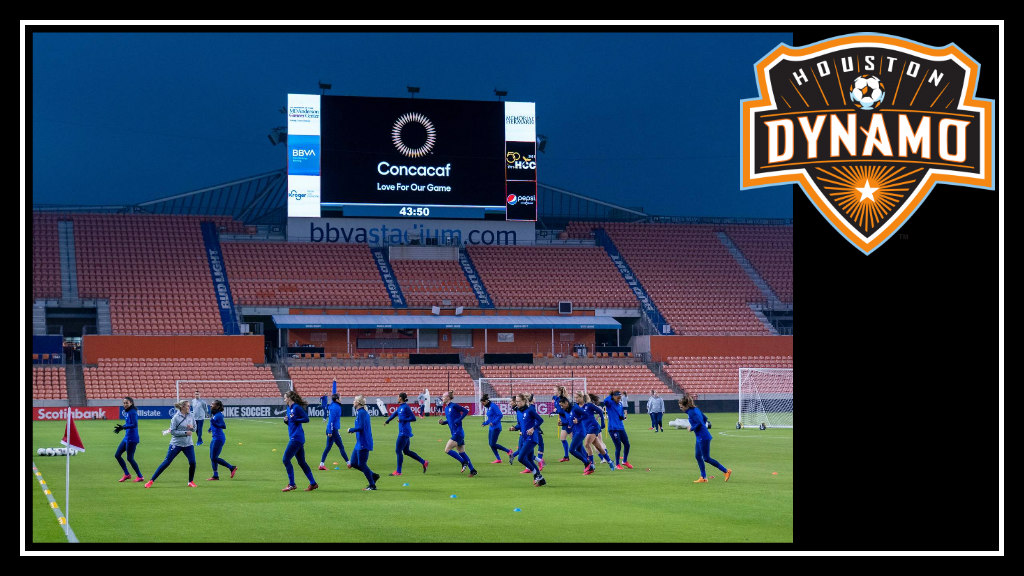 One of the things that I remember being told about the internet when it first started to show up regularly in households (yes, I’m old) is that we were going to be able to find — and converse with — people with wildly varying interests from all over the world. The idea that I could peer into a globe’s worth of hobbies and learn about them was spectacular, and I still love to watch people share their unconventional passions with others on the internet.

I’ve been tickled to find and follow Donnavon Robinson, the Senior Groundsman at BBVA Stadium – the man that keeps the pitch in shape through the Houston weather and the constant cleat action from the Houston Dynamo, Houston Dash, and some international matches as well!

Last week he posted a photo of the pitch on Twitter, just as I was making my way to BBVA for the first time in 2020. I was stoked to get down there and see it for myself, and his hype did not disappoint.

I got to visit the stadium to help measure some supporters’ section and tifo display areas in anticipation of an expansion in the upper and lower bowls. doubling the size as a part of the push for additional groups and hopefully larger numbers of supporting fans. Of course, butts-in-seats isn’t exactly what the section is about, so the stadium is also planning to remove the fold-down seats for Dynamo matches to promote a more engaged crowd. While the section always had signage indicating it was a “Standing Only”, the rule was never enforced. Hopefully, this update will be a first step in bringing true Safe Standing standards to the supporters at BBVA.

Fans hoping for an inclusive and accessible experience, never fear! The ADA seating will remain in the middle of the supporters’ section, so if you are able to lift the section with your energy, we’re still happy to welcome you.

In addition to the Supporters’ Section changes which are expected to be complete by February 29, technological upgrades have already been made at BBVA. The Dynamo are the first MLS team to deploy WiFi 6, an upgraded network technology designed for high-volume use, allowing fans to connect to a stadium-wide system for improved mobile ticketing and wireless food ordering. For digitally-minded fans and influencers, this also means improved speeds for uploading photos and videos on game days.

Speaking of game videos, four new HD LED video displays have been installed — a major improvement. The screens are double this size of the old boards and increase the visibility of in-match videos.

Despite the changes, BBVA still feels like home, and I’m ready to get back into the swing of the season. Thirty more days, but who’s counting?