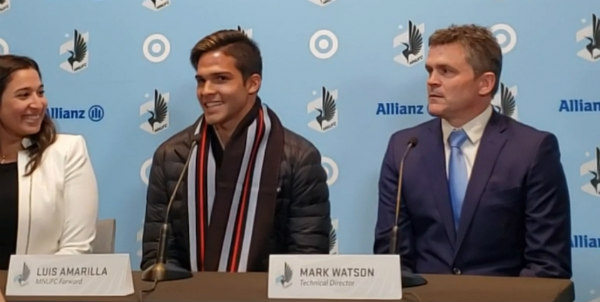 Minnesota United FC formally introduced Luis Amarilla to the media and supporters on Sunday, February 9. One week later, the Paraguayan striker gave fans a glimpse of the action he had promised them.

The Loons played their first of three matches of a preseason tournament in Portland on Sunday, February 16. Amarilla scored both goals for Minnesota in the 2-2 draw to New England Revolution. His run-of-play goal, assisted by midfielder Kevin Molino, was a buttery-smooth glimpse at his vision and skill in front of goal.

The power behind his upper-90 penalty kick triggered more than a few grins back in Minnesota, too. The attack led by Amarilla in the first half was the most refreshing brand of soccer the club has displayed in quite some time. With Molino, Robin Lod (who drew the penalty leading to the PK) and Ethan Finlay, lining up left-to-right behind the striker, the Loons dominated the passing game.

As if to startle fans out of their goal-drenched dreams, the defense folded in the second half. The Revs equalized easily and nearly pulled ahead on a number of occasions, denied only by last-gasp efforts of center back Michael Boxall and goalkeeper Tyler Miller.

But isn’t that what preseason is for?

Dreaming of Goals at Allianz Field

One week prior, the Third Annual Surly Boot Soccer Tournament was held on the Great Lawn for the first time. Fans were allowed – nay, encouraged – to grab a breakfast beer (Surly Furious, of course), lace up their Sorels and kick an orange ball in four inches of fresh, powdery snow.

A number of Loons players made appearances throughout the day, some braving the cold to turn the tables on their supporters, watching a few of the 20-minute boot soccer matches. The headliner though was Amarilla.

Following a press conference and a tour of the stadium, Luis Amarilla entered the Brew Hall to greet and be greeted.

The striker sounded as genuinely excited to be in Minnesota as the fans were to see him. Most notably, Amarilla spoke of the team:

With everything that I saw (in Florida) and what I knew about the team before, the team has a style. I think Adrian has developed a great style for the team with the pressure he exerts. I know that all of that is because there are good players here with quality, so I think this year Minnesota has the chance to continue with the success from last year because it is a good team and I’m sure this year we will be able to accomplish our goals and that’s what we all want.

Of course, the fate of a team player is determined by the same factor as anyone else’s. Performance.

“What I can promise, and I had told Adrian in [a] phone call was, 25 goals,” Amarilla said through a translator. “I think it’s a good objective for me because last season I scored 19 and I think I can accomplish it. I am convinced and I have the certainty with the ambition that it will be that way.”

From Luis’ lips to Dethloon’s ears.

One thought on “Luis Amarilla Dreams of Goals with MNUFC”