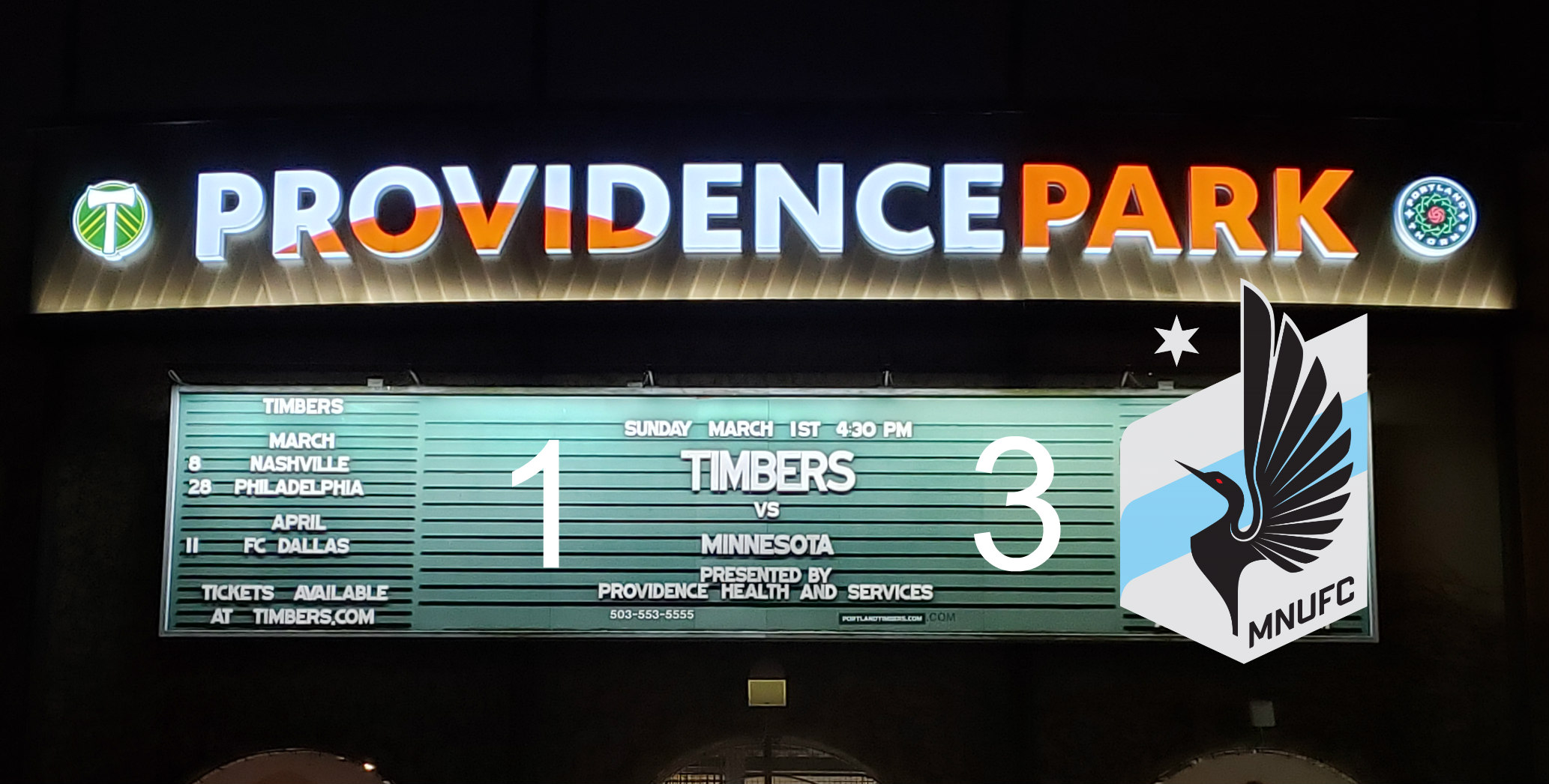 March 3, 2017: Minnesota United FC played its inaugural Major League Soccer match in Portland. The Loons gave up a goal in the 14th minute (to Lawrence Olum, who would join Minnesota two seasons later), but held the Timbers to that 1-0 lead going into halftime. In the 79th minute, Christian Ramirez cut a 2-0 deficit in half with his, and the club’s, first MLS goal. But ultimately, MNUFC fell 5-1, a performance which gave rise to a slogan that would be tested many times through that season:

“We’re just happy to be here.”

March 1, 2020: The MNUFC squad that made its first regular season appearance at the recently renovated Providence Park had undergone a rebuild of its own. While the stadium added 4,000 seats in the offseason, just one Loon from that 2017 lineup made the 2020 trip.* And what an appearance that was, securing the club’s first MLS win in Portland.

True to his offseason word, head coach Adrian Heath slotted Kevin Molino into the No. 10 spot on Sunday, the playmaking position vacated by Darwin Quintero. While he played on the right wing in 2017, Heath maintains that Molino’s experience as the 10 in Orlando, together with his stellar return to fitness after a 2018 ACL tear, supported this tactic. Molino’s two goals at Providence all but guarantee the role is his to lose.

After playing flat in the first half — allowing easy turnovers, failing to close defensive holes and poor touches in the final third — Minnesota came out of the break looking like a different team. Ethan Finlay and Robin Lod seemed in sync on the right and left wings, respectively, making the most of a counterattack opportunity. While Lod couldn’t finish his shot, Molino stepped up to a loose ball Loons of the past were known to quit on.

“It was anticipation thinking that the ball was going to come back to me and I followed up and take my time and scored for the team,” Molino said.

A stout, one-touch stop by Ike Opara redirected the ball to Finlay who sprinted down the wing. Amarilla was perfectly positioned at the far post to receive Finlay’s cross and headed it in for the go-ahead goal at 76′. Just two minutes later, Finlay, stranded on the penalty spot by a line of defenders, flicked a ball over their heads where Molino was ready to bury it.

“Together as a team”

“After a difficult first half, all credit to them,” Molino said of the squad’s overall performance. “I think we fought hard and stuck together as a team. You know Portland is a very good team at home, they have a lot of quality, the fans get involved in the game and of course [it was] difficult the first 15 minutes but we weathered the storm and we got a goal and we rallied together as a team.”

A team. Is this the squad fans have been waiting for?

Indeed, though the first half was full of the same errors that have plagued MNUFC’s Major League tenure, Sunday’s match seemed very different. Amarilla’s go-ahead goal was not an example of a big name/high price player who could score in desperate times. That goal was the result of a team effort to turn the match around. And some traveling fans — this writer included — felt somewhat ashamed for not realizing it sooner.

It wasn’t until we sat down at the Kingston to refuel, rehash the game and catch up on our Twitter feeds, that we learned Amarilla had run straight to the corner to celebrate with the bench players and acknowledge the visiting supporters section on the deck directly above them. We were too busy high-fiving and asking one another if we could really beat Portland away. Molino’s second goal and the arrival of the final whistle were both celebrated the same way.

When the Loons and their fans can both lose themselves in their celebrations — finding camaraderie in raw emotion, pure euphoria — something is going right. We’re not just happy to be here — We’re happy to be here with this squad. And the season has only just begun.

*Even the MNUFC squad that lost 3-2 in Portland’s late 2018 Home Opener was very different from the inaugural squad. Molino suffered his season-ending ACL tear just weeks prior. Brent Kallman, currently suspended from league play, was on the bench in 2017 and 2018. Boxall and Finlay were the only Loons to feature in both 2018 and 2020.

Featured and other images: @bcmcdowell