MLS is Back, July 16: Cincinnati Defends Their Way To A Win Against Atlanta 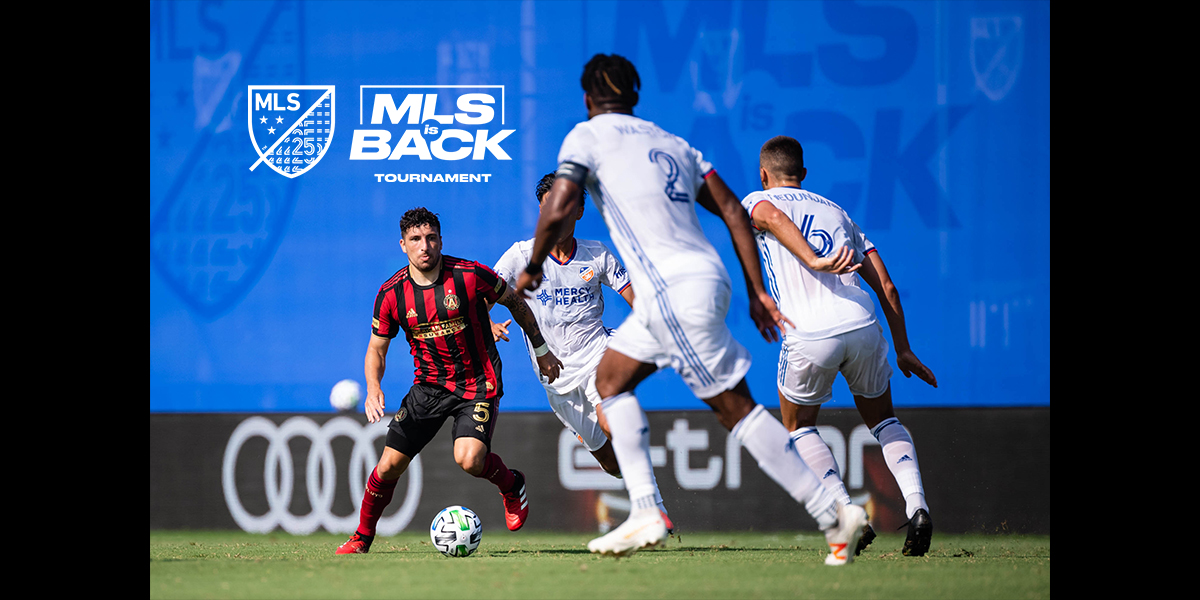 After a disappointing initial match, FC Cincinnati wasn’t taking any chances in their early morning meeting with Atlanta on Thursday. Cincinnati took a very firm defensive stance from the start, sitting back in their own half and rarely passing the center line.

Perhaps frustrated by the stalled competition, Atlanta’s Mulraney received an early yellow card battling in the midfield for possession, then roughly took down Cincy’s Gyau on one of his only forward runs, earning Mulraney an ejection only 26 minutes in.

Even a man up, Cincinnati refused to be aggressive and continued to sit back through the first half. The soccer gods smiled on the Orange and Blue yet again when Atlanta was awarded a penalty late in first-half stoppage time; the call was rescinded at the last moment after VAR ruled that an offside offense occurred earlier in the play. The first half ended with no goals on the board for either team.

The second half began with Cincinnati only marginally increasing their offensive efforts. Many hard challenges came from both sides, and the referee seemed to be calling fouls at random – with some minor infractions receiving cautions and more serious offenses earning only a lecture. This inconsistency led to some serious frustration among all the men on the pitch that only translated into more rough play, and the second half turned into a series of free kicks. The match seemed to finally find a stride around the 70th minute, and FC Cincinnati’s Amaya found an offensive sweet spot to score in the 76′.

Playing against a 10-man squad with a goal advantage in the last quarter-hour of regular time, FC Cincinnati still failed to maintain any direction or confidence in the match. Atlanta was definitely the more aggressive team with more opportunities, but they were simply unable to find the net.

VAR was called on again in the 99th minute, and the referee found an off-the-ball offense from Atlanta’s Williams worthy of a straight red. Atlanta finished the match with only 9 men, and with a loss to FC Cincinnati.

While Frankie Amaya scored the match’s only goal, the biggest influence on this game was the officiating. The center ref appeared to lack confidence in his calls, illustrated by the inconsistencies in his consequences. The VAR official seemed to want to make up for this shortcoming by keeping an extra-close eye on the match, initiating two very consequential reviews. We’ve quickly transitioned in this tournament from, “Is there VAR at MLS is Back?” to “VAR is steering this tournament.” It will be interesting to see if this is an anomaly or the start of a trend.

We’ll continue tournament coverage later today as we jump into another double-header starting at 8:00 pm Eastern.