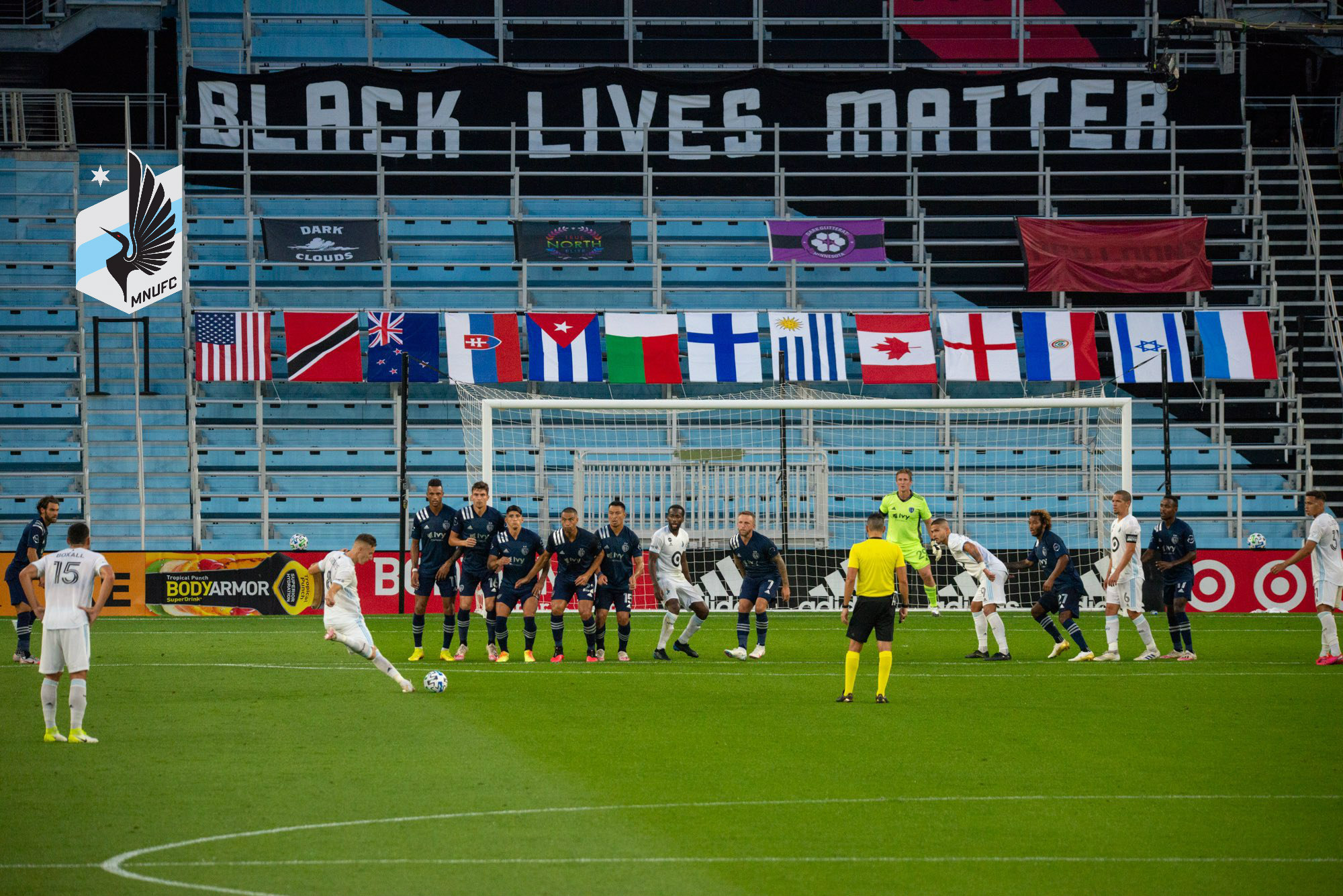 Minnesota United FC kicked off their 2020 home season with a Friday night feature against perennial opponent, Sporting Kansas City. The match was a near mirror image of the Orlando edition of the Nicest Rivalry in Sports, a 2-1 result heavy with own goals and missteps. The only real difference: Minnesota was on the losing side.

There was some rotation for both squads, with coaches looking at this restart a bit differently than the packed MLS is Back Tournament schedule. For SKC, forward Johnny Russell got the start over Gerso, Gianluca Busio joined Roger Espinoza in the midfield, and defender Matt Besler was left on the bench. For the Loons, Greg Ranjitsingh made his debut in net, Ozzie Alonso was back in the captain’s armband, and Luis Amarilla, a late scratch in the Orlando matchup, got his first taste of the I-35 Derby. Unfortunately, Amarilla’s performance was much like the endless construction on 35 — Not well supported, slow in the final stretch and full of poor finishes.

A 2-1 scoreline usually hints at a decent back-and-forth match with a flurry of shots and runs. But, as in Orlando, Friday’s 2-1 result came from an own goal apiece and a “soft goal,” this time conceded by Minnesota. That soft goal started the evening, when SKC leftback Jaylin Lindsey caught Gadi Kinda on an easy run that split Jose Aja and Chase Gasper and caught Ranjitsingh flat footed in the 12′.

Lindsey wasn’t done there. When an Ethan Finlay cross was too far ahead of Amarilla, but not close enough to be called a shot, Lindsey’s deflection took goalkeeper Tim Melia by surprise. Take what you can get. All level in the 32′. Defender Michael Boxall sealed the deal for SKC in the 55′ when his boot, outstretched for a last-ditch defense, deflected a shot in for the own goal.

Minnesota’s best chance at an equalizer came from the centerback’s boot late in stoppage time. But it shouldn’t have been. Amarilla, the star loanee who had promised Heath 25 goals in 2020, managed only two shots all night, neither on target. He wasn’t subbed off for fresh attacking legs until the 82′, far too late for the squad to regain momentum. Amarilla’s troubles may not be so much from the lack of service so much as the fact that the rest of the squad had to make do without him for much of this season.

In Orlando, Mason Toye and Aaron Schoenfeld found minutes in Amarilla’s absence, but most of the Loons goals in the tournament came from midfielders. Finlay, most notably, had no one to serve and timed his runs to find opportunities that didn’t require a true #9. His failed cross that found Lindsey’s foot looked very much like the high angle shots he’s become accustomed to taking. He was tired and flustered when he was replaced by Robin Lod in the 66′, but his short shift made his case as a pivotal midfielder.

When asked by MNUFC commentators Cal Williams and Kyndra de St Aubin what went wrong, Boxall cited a lack of composure and communication across the pitch. But individual responsibility prevailed in the immediate aftermath: “Doesn’t help when I put us in the sugar honey iced tea.”