Hobbled by Injury, D.C. Limp To 4-1 Loss Against Philadelphia Union 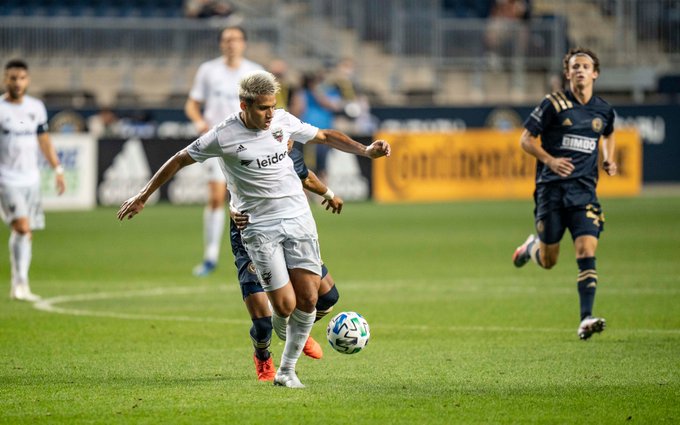 A run of poor luck has seen several D.C. players injured, some quite severely (Edison Flores recently sustained a concussion and multiple facial fractures, Paul Arriola continues to recover from a torn ACL), leaving head coach Ben Olsen with increasingly limited choices. With the Black-and-Red’s squad drastically reduced by injury and absence, a match against a full-strength Philadelphia Union was never going to be an easy one to play, let alone win.

A cursory look at Saturday’s XI had everyone doing a double-take. Where were Hamid, Birnbaum, and Brillant? The trio have been stalwart fixtures in Olsen’s lineup, rarely missing minutes, much less matches. Hamid was out of the action for personal reasons, while Birnbaum and Brillant were both suffering from minor injuries. Unfortunately, their absence would be felt keenly, just minutes into the match.

New defender Axel Sjöberg (a recent trade from Columbus Crew in exchange for Emmanuel Boateng) notably joined Olsen’s makeshift backline alongside Donovan Pines and Joseph Mora – and it was clear on the field that the three hadn’t spent much time together. Kacper Przybylko was able to easily capitalize on the trio’s lack of familiarity. He opened the scoring for the Union in the 7’, taking advantage of a corner kick, and would go on to make it a brace in the 16’.

D.C.’s pain would continue as Sergio Santos made it three for the Union in the 21’. Philadelphia had racked up three goals in historic time, setting a new club record. The first half wouldn’t improve for D.C. as they struggled to find both their rhythm on the pitch and the back of Philadelphia’s net.

Olsen sent in fresh legs at the half, substituting homegrown player Griffin Yow for Yamil Asad. Estonian striker Erik Sorga would enter the match in the 57’ for Ola Kamara. Play continued to improve for D.C. as Yow and Sorga joined forces with starter Kevin Paredes. The young players were able to leverage their speed against the Union to start producing some exciting chances.

The Union’s Brenden Aaronson netted goal number four (yes… four) in the 61’, leaving D.C. with an almost insurmountable deficit. Julian Gressel answered, scoring the lone goal of the match for the Black-and-Red (and his first for D.C. United) in the 63’, but it wouldn’t be much more than a consolation prize, destroying Andre Blake’s hopes to keep a clean sheet.

Moses Nyeman, the 16-year old DC homegrown, made his MLS debut in the 79’, relieving Gressel. Watching Nymen alongside Paredes, Yow, and Sorga was a definite bright spot in an otherwise disappointing match. When it comes to D.C. United, the kids are definitely alright, and we would like to see them nab more minutes on the field.

D.C. faces off with longtime rivals, the New York Red Bulls on Wednesday. One can hope that they will have enough fit players to round out the 18. Regardless, we’d love Olsen to play the kids.