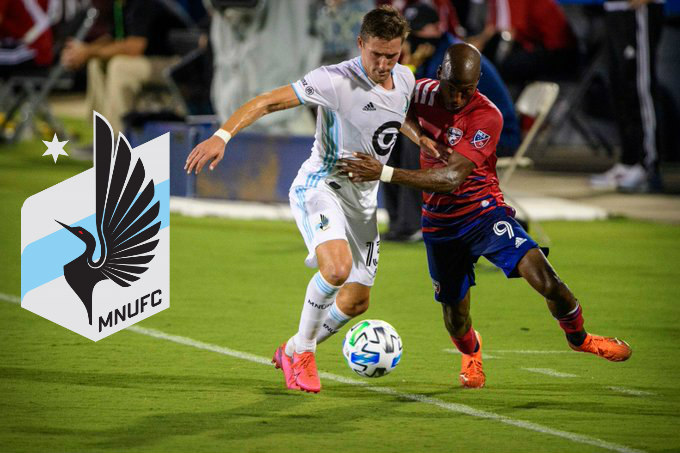 A frustrating first half for Minnesota United on Saturday was followed by an educational weather delay and then a second half full of glimpses of a bright future. Ultimately, hope for the future is all the Loons left Texas with.

Heath’s men have come a long way since the days of conceding buckets of goals in the opening 10 minutes, but you may not believe that if Saturday night was your only evidence. Even without Reggie Cannon, who left the club for Portugal’s lower division just days earlier, FC Dallas picked apart United’s backline as if they’d studied film of their every trick and tendency. They may well have as rightback Romain Metanire was burned not once, but twice by Fafa Picault in less than 90 seconds, putting the Loons down 2-0 in the 12th minute.

The first goal, by Picault, could be dismissed as a fluke, but the second goal — a cross from Picault, cleared by Michael Boxall, fell to Ricardo Pepi who served a perfect ball back across the box for Jesus Ferreira — caught the entire backline flat-footed and exposed one of United’s biggest flaws: one lapse in composure is always compounded and exploited.

Of course, defensive lapses can be excused if there’s an attack to take off some pressure. For the Loons, well… There is not. Minnesota’s attack was so lackadaisical that manager Adrian Heath made some changes at the half which no fan could have predicted. But first — A weather delay.

While the national audience viewed some mobile network and beer ads and the players got some extra cool down time in the dressing room, Fox Sports North treated Minnesota’s faithful to an episode of Due North Outdoors. Viewers got a behind-the-scenes look at VMC’s fish hook factory in France and learned that livelier bait means you may catch more fish. Could the Loons serve up some lively bait in the second half and catch some more goals? Why, yes. Yes, they could.

A full dressing down by Adrian Heath was followed by four changes to start the half. “If I had more substitutes, trust me, I would have made more changes,” he said after the game. Luis Amarilla, Kevin Molino, Ethan Finlay, and Robin Lod, the front four of Heath’s 4-2-3-1, were replaced by Mason Toye, Raheem Edwards, Thomas Chacon, and Hassani Dotson.

Edwards reflected, “He lit a fire up our asses. We knew it wasn’t good enough. We knew, not just from him. We didn’t need to hear it from him. It was from within ourselves. It wasn’t good enough.” The midfielder played a key role in the second half resurgence, snagging a failed clearance by Dallas and setting up an opportunity. Dotson added the exclamation point.

Edwards, Dotson, and Toye combined for 5 shots in the second half, 2 more than the combined total of the benched front line. Leftback Chase Gasper added 4 shots through his full shift, with 1 on frame (and 1 so horrifically far off frame that MNUFC Twitter seems to have soured on the sophomore defender) and Chacon made his presence known in transition.

The second half proved that Minnesota’s depth has potential, the subs becoming an embodiment of Heath’s motto: ‘Goals change games.’ While an ill-advised tackle by Heath’s fifth(!) and final sub, James Musa, led to a late penalty that sealed a 3-1 Dallas victory, the ‘kids’ showed their worth and will certainly challenge Heath’s Best XI ahead of a Wednesday night showdown in Houston.

The only real question: What went wrong? Midfielder Ozzie Alonso was one of the best players on the pitch on Saturday but also showed his flaws, pressing too far forward on attack and not tracking back quick enough to cover Dallas’ repeated counters. He shows well with Dotson ahead of him to balance his movements, overlapping in the midfield to cover one another, but paints himself into a corner when behind Molino who focuses on the press. Luis Amarilla displayed some holdup play, but was stranded with no service in the 4-2-3-1.

What can we expect from the club in Houston? The speed and movement of Saturday’s second half, if Heath has anything to say about it.

“Forget the tactics, forget the shape, forget the system. It don’t [sic] matter. If the opposition want to run around more than you, and they want to tackle more than you and they want to get the ball forward and get on the second ball, that’s not changed. That’s not changed from the ’70’s to what it is now. If you don’t compete against Liverpool, Bayern Munich, and all these teams, they run all over you. So, if it’s good enough for them, trust me: It’s good enough for Minnesota United. Or, it will be.”

Running. Lots and lots of running.

Minnesota United FC is set to kickoff in Houston on Wednesday, September 2, at 7:00 pm CST.

On an entirely different note, a reminder: As we sit in our living rooms, watching men run up and down a pitch for sport, there are other things going on in our world which are much more important. While we debate the merits of one player over another in any given performance, many of our neighbors are debating the merits of one human life over another and they are no longer hiding behind their keyboards.

Take care of each other and, most importantly, take care of yourselves. We need you.