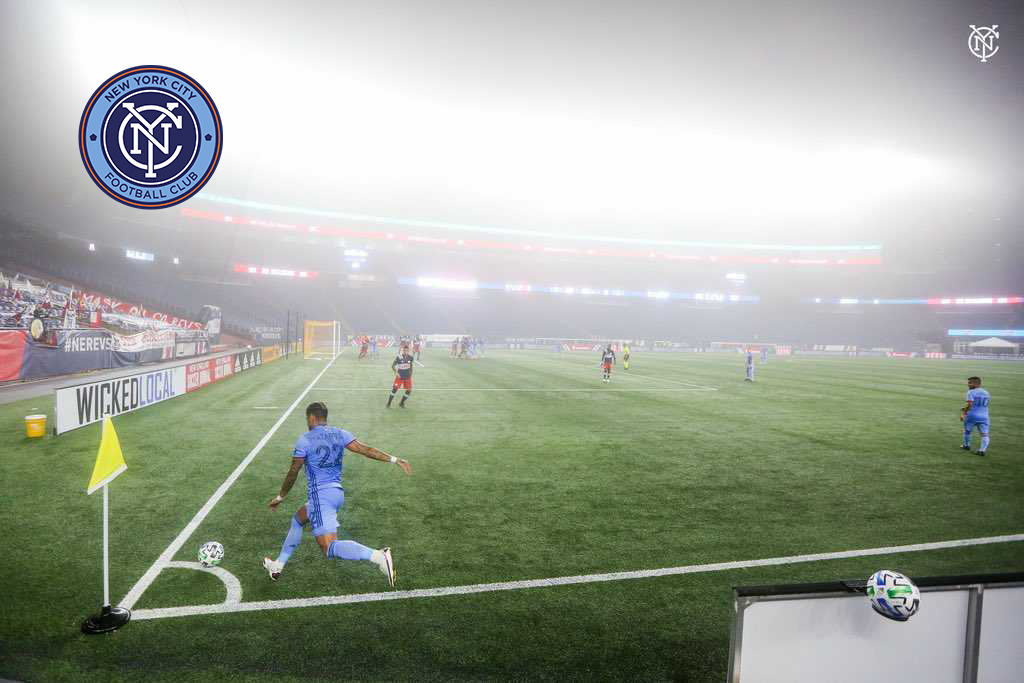 New York City FC continued to turn their season around with their third win in a row after defeating the New England Revolution in a foggy Gillette Stadium.

Winning 2-0, NYCFC now find themselves in 6th place in the Eastern Conference. City’s most recent win comes from a surprising change in the formation from Ronny Deila which placed Gary Mackay-Steven and captain Alex Ring on the wings of a 4-3-3 formation.

New England Revolution had Bruce Arena back to coaching on the sidelines after serving a three-game suspension for unacceptable conduct and use of inappropriate language. OG NYCFC player Tommy McNamara, who now plays for New England, often found himself fouled or roughed up in this match. “That’s what he gets for going to New England,” joked supporters watching from a Zoom video call.

The Boys in Blue found themselves in possession of the ball for most of the first half. In typical NYCFC fashion, plenty of goal opportunities were squandered with a lack of finishing from the forwards and wingers. NYCFC saw a plethora of corner kicks, none of which ended in a goal. While there were plenty of shots for NYCFC, very few were on target. It was just another frustrating half for New York City FC supporters. “Why does Gillette Stadium look like an unfinished deck?” muttered Felix of the Third Rail Bronx.

The second half started with a similar story; NYCFC controlling the pitch but unable to put the ball in the net. Unfortunately for the Revolution, a cross from Anton Tinnerholm in the 60th minute was intercepted by Michael Mancienne and slipped into the goal. New England nearly equalized off a free-kick in the 70th minute, but Sean Johnson was able to redirect the ball out of the net.

Anxiety among the supporters grew as the second half drew to a close. They waited for the goal that would steal two points from NYCFC. By the grace of the soccer gods, Matarrita sent in a beautiful corner kick that was headed into the goal by Heber. Shouts of relief and excitement escaped through the mouths of the loyal as they realized NYCFC had finally scored off a set piece. Twenty minutes later, the whistle blew and New York City FC racked up their first clean sheet of the season.

NYCFC plays their next game against D.C. United on Sunday, September 6th at 7:00 pm EST.