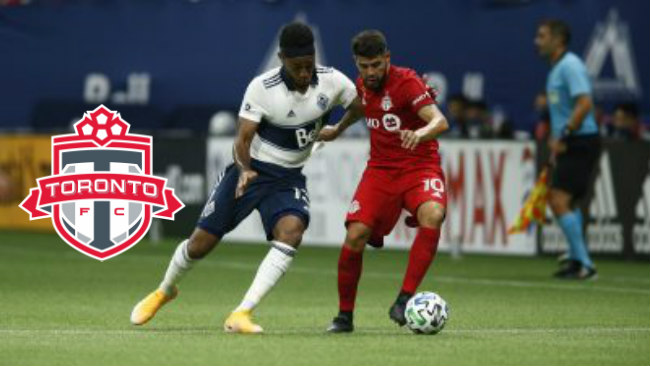 The Canadian MLS action headed out west to Vancouver on Saturday night (for the first time since February!) and the Whitecaps made the most of it. The scoreline never stayed the same for too long in this back and forth goal-fest. In the end, Vancouver Whitecaps FC was able to pull ahead for a 3-2 victory over Toronto FC.

Toronto started strong and dominated possession in the first 15 minutes of the game. However, despite a number of chances for Toronto, it was Vancouver who took an early lead in the 17th minute when Lucas Cavallini scored a header off of a cross from Ali Adnan. The goal was his first as a Whitecap and also Vancouver’s first goal since the resumption of regular season play.

That lead didn’t last long. Jonathan Osorio, wearing the captain’s armband, tied it up in the 25th minute with his first goal of the season. The assist from Alejandro Pozuelo was his 8th of the season, the most in all of MLS.

Vancouver pulled ahead, again, in the 57th minute when Michael Baldisimo scored a screamer from outside the box for his first-ever MLS goal. Toronto FC was surely, once again, regretting a fancy move that ultimately backfired. Auro Jr. lying on the ground behind the wall for a Vancouver freekick from outside the box may have looked impressive, but ultimately helped leave Baldisimo wide open to capitalize on that opportunity.

A goal from Pozuelo in the 71st minute, a header off of a cross from Pablo Piatti, ended the streak of goals scored by Canadians but once again tied up the match. This tie, too, was short-lived, ending when Jake Nerwinski slid the ball into the back of the net in the 77th minute for what ended up being the winning goal.

Thomas Hasal continues to impress in net for Vancouver while Maxime Crépeau heals from a fractured thumb. Making a number of saves that even Toronto fans could admire, the scoreline almost certainly would have been different without his efforts.

The Whitecaps were surely thrilled with their impressive 3-2 upset, while Toronto FC are left analyzing their defensive lapses. Saturday night’s result means the next Canadian matchup, Montreal vs. Toronto on September 9th at 8:00 pm EST, will be a critical game in determining which Canadian MLS club moves on to the Canadian Championship Final.