Dave Johnson: 25 Years Behind the Mic for D.C. United 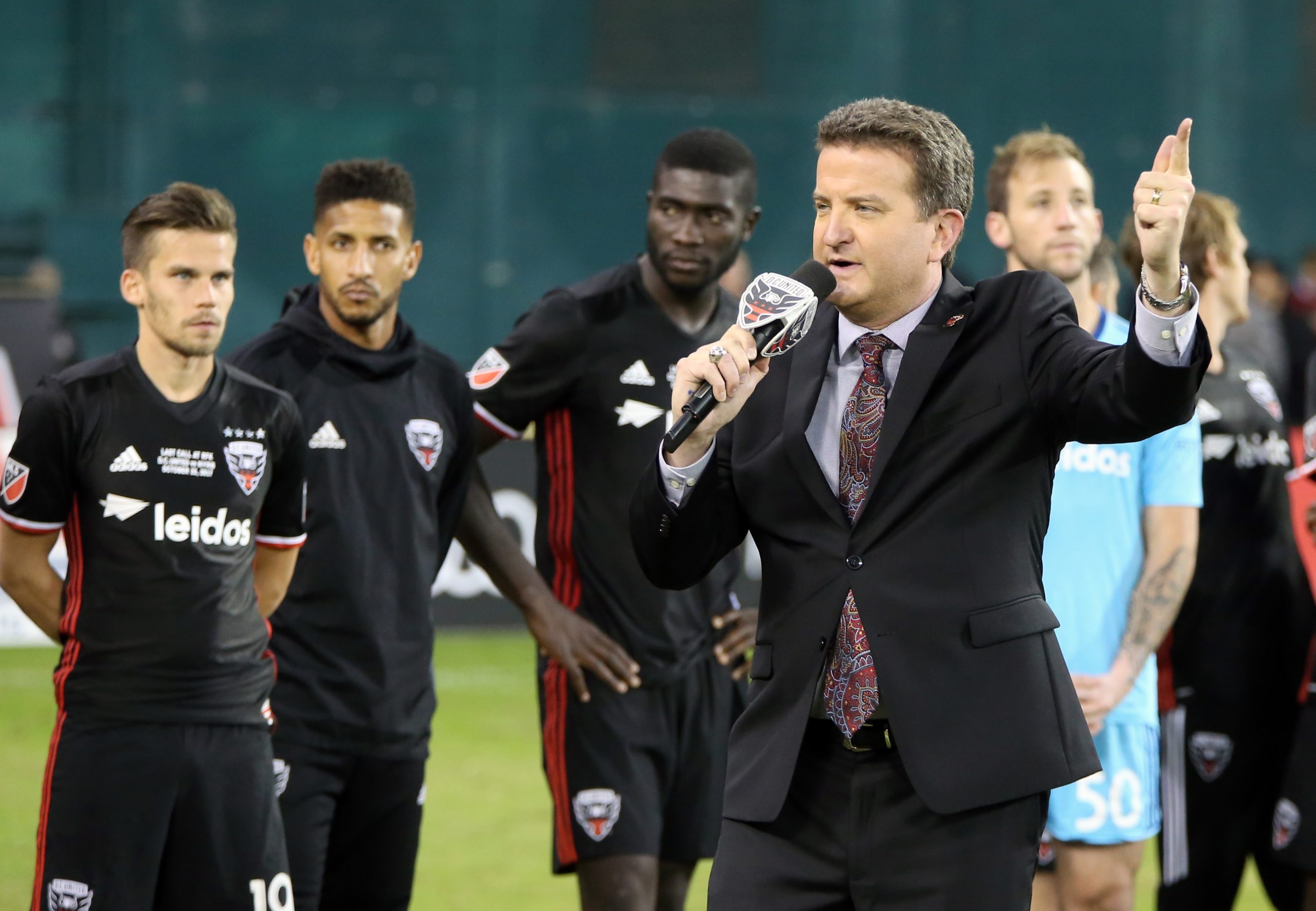 If you’re thinking about D.C. sports, one of the first names to come to mind is broadcaster Dave Johnson. An icon of the local sports scene, Dave is the Senior Sports Director at WTOP, the local radio station where he is also an award-winning sports anchor. Over the course of his career, Johnson has been on FOX 5, ESPN, and PAX, and he received an Emmy award for hosting the Washington Capitals ‘Face Off’ tv show. The play-by-play voice for the 2006 FIFA World Cup, Johnson broadcast 26 matches on XM radio, including the Final in Berlin. Suffice it to say, Dave knows D.C. sports.

Dave Johnson is also the voice of D.C. United (and the Washington Wizards). His play-by-play coverage is distinctive, entertaining, and has made its way on to more than a few t-shirts; “It’s in the net!” should probably be copyrighted in Johnson’s name. But most of all, Dave is part of the bedrock of the D.C. sports community. Involved in everything, from charity work to mentoring young journalists and broadcasters, Dave has helped D.C. sports thrive. Although Dave is one of the hardest working and most experienced people on the D.C. sports scene, he always makes time for others. Dave has an amazing ability to put you at ease. He really listens and connects to others, making you feel that your interaction, no matter how brief, is the most important one he’s had all day.

As D.C. United is poised to begin Major League Soccer’s 26th season, I sat down for a chat with Dave Johnson and the legendary Chris Hull for a look back at the very beginning, in Dave’s own words.

You can watch the entire interview here:

*Interview has been edited for clarity and brevity.

I remember just the excitement of that first year. You have to understand what the climate was like in that period. Yeah, we had the World Cup in 1994. Look, Americans, you give us an Olympic shot, give us whatever, we’re going to put on a wonderful event. Doing a league on a daily basis is a whole different challenge, no matter what sport you’re dealing with. Especially soccer, because when the North American Soccer league finally folded in 1984, the discounters said, “Look, the Pele generation has passed. It’s never gonna happened in the United States.”

As Major League Soccer started in 1996 there was so much doubt about its future. I can still remember being at the first game in San Jose. I remember being in San Jose and it was sold out. And again, it was the first game. Big events we always do well, we sell out. Somebody asked the commissioner at the time, Doug Logan, about what he was hoping for in terms of attendance at other places. Logan was saying, ‘I hope I just get five figures at some of these places.’ In other words, at least 10,000. And some journalists said, ‘well, you know, you’re lowballing it.’ But as somebody who lived in the eighties where we could have a beautiful sunny day and we would struggle to get a thousand people at an American professional soccer game, I knew he wasn’t lowballing it. There was no guarantee this was going to work. Then the crowd started showing up in places. It just warmed the heart so much, but you knew it was also the first rush. There was still a long road ahead.

On Gordon Bradley, Clive Toye, and the Grassroots Soccer Movement

If Gordon Bradley and Clive Toye decided in 1969, when the NASL was down to five teams, to go back to England and call it a day… Maybe the NASL wouldn’t have continued. But they got Pele for this country and real interest, not only in the professional game but also in people playing the game. And really, you’ve got to build things from the bottom up. They knew that and helped create a grassroots movement. Then all of a sudden Gordon Bradley is my broadcast partner on these games, I had known Gordon for years. He had hired me to do the Washington Stars, which were in the American Professional Soccer League back in the 1990s.

As we’re getting on that plane to go to Columbus it really was a feeling of, ‘Wow, we’re really doing this and it’s really happening.’

One story, I remember vividly from that first trip. So, we’re so excited. We’re going to broadcast our first D.C. United game. We’re talking on the plane and we land at night and we get a rental car at the Columbus Airport. And we’re talking in the car as we always did, as it turned out on every road trip. It’s a wonder we ever found our hotel because we just kept talking and I kept loving all Gordon’s amazing stories. We got to the hotel, parked the car, and called it a night. The next morning, neither one of us could remember what our car looked like and we’re in a hotel and everybody’s got a rental car.

I can still remember the hotel security saying, ‘what are you doing, sir?’ And I said, ‘well, I’m looking for my rental car. I don’t remember what color was.’ And he says, ‘you know, I just ran into a guy on the other side of the hotel doing the same thing.’ I said, ‘that’s my partner!’

We finally found the car and we finally got to the stadium and there was a big crowd and there were lines. And yeah, we, we lost the game that night, but I remember the bite in the air. I remember interviewing at the time, Mr. Doug Logan. Look, we could have lost 10 – nothing, or, I think we lost four – nothing. I don’t even remember the score. I just remember the excitement that this is really happening.

Bruce Arena set the standard and, and not enough cannot be said of what he created. He created that amazing program at Virginia that was getting attention from, you know, the big papers, New York Times, Sports Illustrated, at the time when soccer was not getting any attention at all. And because of the greatness he created with that program, people were paying attention to soccer.

Other than that, there were not a lot of people on the national landscape paying attention to soccer. So as D.C. United got off to that slow start, I just remember all the people saying, ‘yeah Bruce Arena, college coach, but he can’t deal with the pros.’ And I remember thinking, ‘you just wait, you just watch, he’s going to get this team and shape this team. And it’s going to turn around.’

Part of it is certain players that were acquired that season, but you know what — it’s just, again, how he selects players for different roles and different situations. Yes, we had Marco Etcheverry, we had Richie Williams. It was a wonderful relationship between those two because he was doing all the work in that midfield and allowed Marco to do his magic. So, I was never worried that D.C. United was not going to turn around. I believed in Bruce Arena then, and still believe in him now.

Everything goes back to the community we’ve created with D.C. United and the people. I always say this, to all of us in the D.C. United family, what a special situation where you get to be a part of building something, of starting something. Baseball has been around a hundred years, basketball, how many years? Hockey? So, you become a fan of all those great sports. That’s great, but you’re not the ones starting it and welcoming people and educating people about the sport. And we’re still doing that. So, everybody that’s along on this journey, you’re creating something that is going to last. You’re part of a legacy and that’s a special thing.

I understand the power of sports. Again, it’s not about the wins and losses. It is about the community and experiences with them. I’m just lucky to broadcast the games and be the person that’s talking. But broadcasting shouldn’t be a field like, ‘okay, he’s on that screen or on that radio dial or whatever, and there’s a wall, or it’s separate.’ Instead, you want people to feel like, ‘he’s with us,’ and we’re just together. I remember how special that felt as I was a kid sitting in the stands and it’s still what gives me the biggest thrill. I like seeing goals, but I like looking around in the crowd and seeing families getting together and having a good time or, you know, the supporters’ section and the beer showers. Just simple joy and fun.

Again, that gets back to, I guess, my core upbringing dealing with my mother’s health challenges. For a couple of hours, when you went to a game, there were no health challenges. This is not about me, but everybody in life is dealing with something, but for those two hours, all you’re dealing with is your people and your friends, that maybe you didn’t see all week, and now you’re with them at the game. All that matters is, you know, getting our team win and if they didn’t, that’s okay too, you know what… we’re going to be back the next week.

Make sure to tune in on April 17th as Dave Johnson calls D.C. United’s home opener against NYCFC. And as always, Vamos United!

Featured image and all images courtesy of Dave Johnson, @davejsports

One thought on “Dave Johnson: 25 Years Behind the Mic for D.C. United”