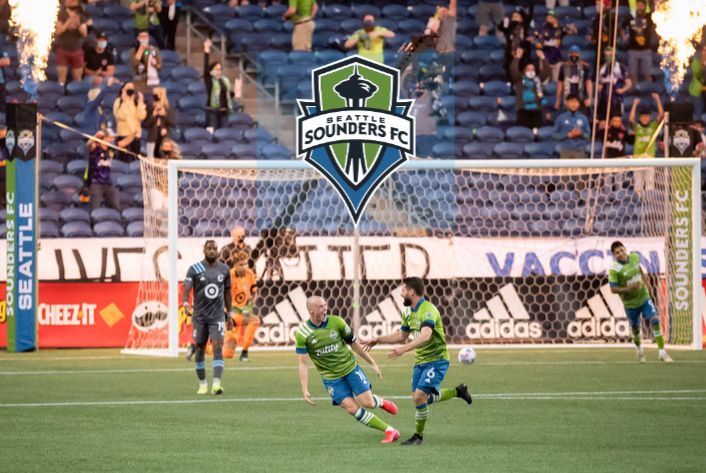 The Seattle Sounders stamped an emphatic 4-0 win over Minnesota United on Friday night in front of nearly 7,000 fans — the first to be back in Lumen Field since early April of 2020. While the Sounders took all 3 points, the teams came together before kickoff to show unity in honoring Daunte Wright. Both teams wore custom black armbands and jersey patches to bring awareness to the most recent incidents of racial injustice in Minnesota and throughout the country.

The first half began on the back foot for the Sounders, who had trouble getting out of their own half while adjusting to the new 3-5-2 formation honed during the offseason. Both Alex Roldan and Brad Smith had plenty to do as wingbacks while Shane O’Niell, Xavier Arreaga, and Nouhou played as central defenders. Josh Atencio (homegrown) made his first-team debut, starting in place of the injured Nicolas Lodiero, and João Paulo and Cristian Roldan rounding out the 5-man midfield. Will “The Dancing Bear” Bruin started up top with newly green-carded Raúl Ruidíaz.

With a 0-0 halftime score and a blocked first half PK (Ruidiaz), the Sounders came out in the second half inspired by what could only have been a traditionally epic Brian Schmetzer pep talk. João Paulo got on the scoresheet first in the 49th minute with what could only be considered an early Goal of the Year nominee.

From then on, the goals came in bunches for the Rave Green. Raúl Ruidíaz scored in the 70th and 73rd minute, set up by Will Bruin and Cristian Roldan respectively. Freddy Montero got his own goal in the 86th, his first for the Sounders since 2013, and taking him back atop the club’s all-time leading scorer list with 48, passing Clint Dempsey’s 47.

Editor’s note: MNUFC’s lineup has been corrected since this story was originally published. The editor regrets the error.