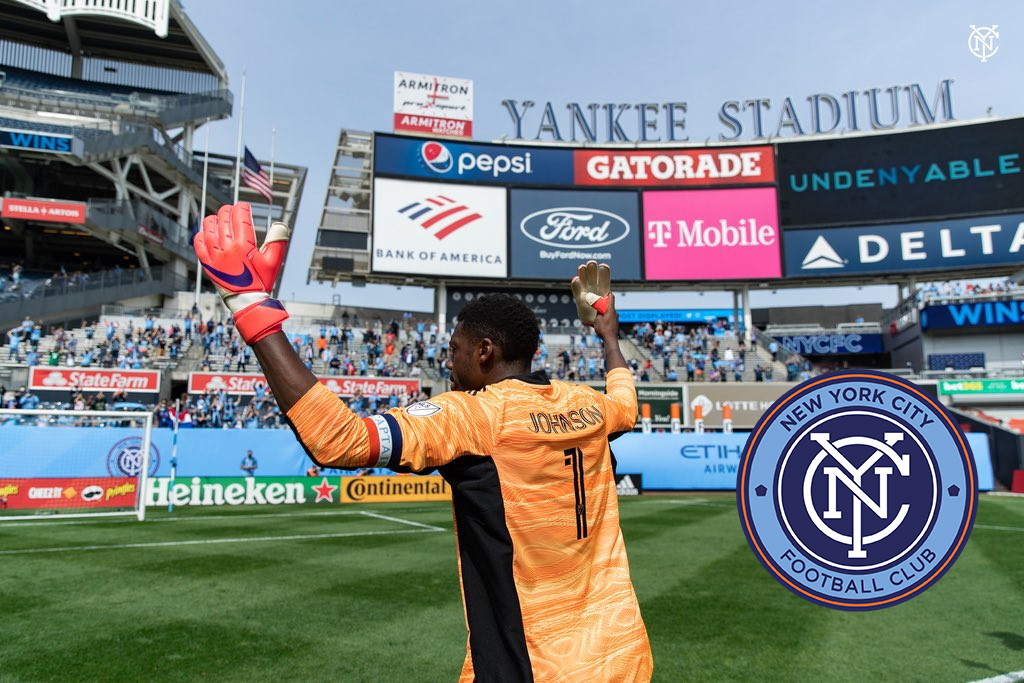 After an excruciating 577 days away from Yankee Stadium, the Boys in Blue returned home to the Bronx and delivered a performance that every NYCFC supporter had been craving for nearly a year. With supporters in the stands for the first time this year, few expected such a strong performance after the 2-1 loss against DC United last week, but many held out hope for at least a victory. Coach Ronny Deila, Captain Sean Johnson, and the rest of the squad, however, had other plans. Fielding a starting XI with only one change from the last game, the play style was much more crisp and concise. With a pass completion rate of 83%, NYCFC had much more control of the ball and increased shots on target. In a surprising twist, every goal was off of a set piece, a first in NYCFC history and a delight for the devoted fans.

The goal scoring started quickly with Jesus Medina cleaning up a loose ball in the box after Gudmundur Thorarinsson sent in a freekick in the 7th minute. Supporters in the stands watched with abated breath, wondering if the team would continue to score goals or collapse in a similar fashion to last week’s game. The first half crawled by with little action. NYCFC maintained possession of the ball, but several errors on the field led to FC Cincinnati attempting to equalize the game. Sean Johnson recorded just as many impressive saves to keep the scoreline 1-0 at the half.

The next forty-five minutes of the match could not have been more thrilling (for New York City FC supporters). A corner kick crossed in by Medina was redirected into the back of the net by Maxime Chanot. The goal was later determined to be an own goal off of FC Cincy defender Nick Hagglund. In the 57th minute, merely four minutes after the own goal, a free kick a few yards outside the box was taken by Thorarinsson. Unexpectedly, he sent a blistering shot past Cincy GK Cropper into the upper ninety of the net. NYCFC players did not let up on the pressure, but rather continued to search for more goals. Attacks on Cincy’s defense chipped away at their already deflated confidence. In the 67th, Taty was able to finish a cross sent in from the corner by Maxi Moralez. NYC was up 4-0 with more than 20 minutes to play.

The final goal of the afternoon was an absolute banger from Medina. With yet another corner kick, Moralez set up the shot by quickly passing a short ball to Medina’s feet out of the corner. One touch later, Medina curled the ball into the net with grace. “You guys hated on my boy [Medina] for so long. I’ve believed in him from the beginning,” chuckled DJ Blazin’ B.

Before the final whistle sounded, Bronx-born native Tayvon Gray made his debut, subbing in for Anton Tinnerholm in the 83rd minute. Gray is the 4th homegrown player for NYCFC to field minutes. His debut in the Bronx was a sentimental moment for him and those who represent the borough. Gray stepped onto the field to immediately celebrate Medina’s brace with the team.

With seven minutes and stoppage time remaining in the game, NYCFC still pressured FC Cincinnati with three more shots near the goal. Taty nearly scored a second goal while Ismael Tajouri-Shradi knocked on the woodwork for the second game in a row. In the waning moments, Maxi attempted to chip the goalkeeper from midfield, but his shot fell just wide of the goal. Cheers erupted from the stands as the referee blew the final whistle and players collapsed on the field. Taty was seen giving his jersey to an emotional Ronald Matarrita (Mata was traded to FC Cincinnati in the offseason after spending five seasons with NYCFC). Players expressed their gratitude to the fans in the supporters section and around the stadium before returning to the locker room. On a beautiful, balmy day in the Bronx, it was good to see New York City FC perform at such a level.

New York City FC will play the Philadelphia Union next weekend on May 1, 2021 at 7:30PM EST. The current Supporter’s Shield champions will host NYCFC at Subaru Park.