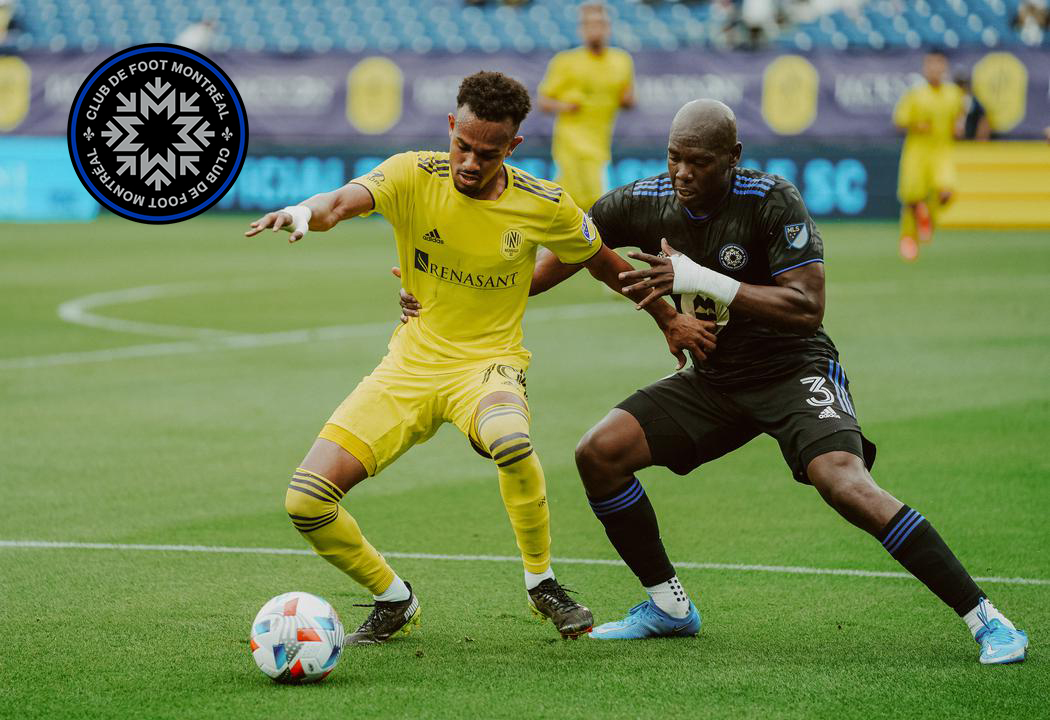 Flying high on last week’s 4-2 win over watered-down Toronto FC on MLS opening day, CF Montreal was set to face a notoriously stingy defense in Nashville SC in Week 2. After boasting the best defensive record in MLS last season, Nashville had given up two quick goals to FC Cincinnati in their own opening match before coming back to draw 2-2. Montreal and Nashville fans alike were left wondering about their teams’ defensive qualities heading into the two clubs’ second ever matchup.

CF Montreal coach Wilfried Nancy’s lineup remained unchanged from their dominant win, aside from Kiki Struna replacing Joel Waterman in the three-man defense. Nashville’s Gary Smith elected to maintain exactly the same lineup that had lived a rollercoaster of a match the previous weekend. For hosts and guests alike, it appeared a carbon copy of the previous week’s match would ensue as Mason Toye scored his second goal in as many matches in the 13th minute when Daniel Lovitz’s pass ricocheted favourably off of Zachary Brault-Guillard. However, Nashville regained composure and dominated the next fifteen minutes of play, peppering the Montreal box with a serious of crosses that would cause a significantly less organized defense difficulty all afternoon.

Yet Montreal were granted another golden opportunity when Samuel Piette gave Brault-Guillard the opportunity to make an explosive run down the right corridor after a Nashville turnover in transition. Brault-Guillard lashed a shot which took a deflection off defender Dave Romney. It caught goalkeeper Joe Willis unaware as it pinged off the crossbar and in, giving the visitors a 2-0 lead at halftime.

Tides turned in the second half, as Nashville SC emerged from the locker room with increased ferocity. They needed less than ten minutes to halve Montreal’s advantage, as Jhonder Cadiz capitalized on an umpteenth cross in the 54th minute while the defense collectively ball-watched. Montreal deflated more as the match went on and it resembled more of a siege than a soccer match. Eventually Hany Mukhtar was left open to slot a rebound past a helpless Clement Diop in the 77th minute to restore much-deserved parity, a 2-2 draw. Despite having double the number of shots compared to their opponent, Nashville were unable to capitalize further and CF Montreal will call themselves lucky to escape with a point.

For the second week in a row, Montreal conceded two thoroughly preventable goals from a lack of defensive awareness and communication. Perhaps some of this can be attributed to a lack of match sharpness due to their abbreviated preseason and lack of friendly matches. However, with 2020’s club Defender of the Year Luis Binks out in the medium term at least, the glaring question becomes which combination of defenders and which formation can stop the team from hemorrhaging as many goals as they did last year. Although Kamal Miller has immediately looked at home in the left side of the three-man setup and Rudy Camacho has performed well in the middle, the third member of the central defense has been more than suspect in the past two matches. Should Wilfried Nancy consider reverting to a four-man defense or is it too early to pass judgment?

CF Montreal return to their home away from home to host Columbus Crew SC at DRV PNK Stadium in Fort Lauderdale, Florida, on Saturday, May 1 at 3:00 PM EST.