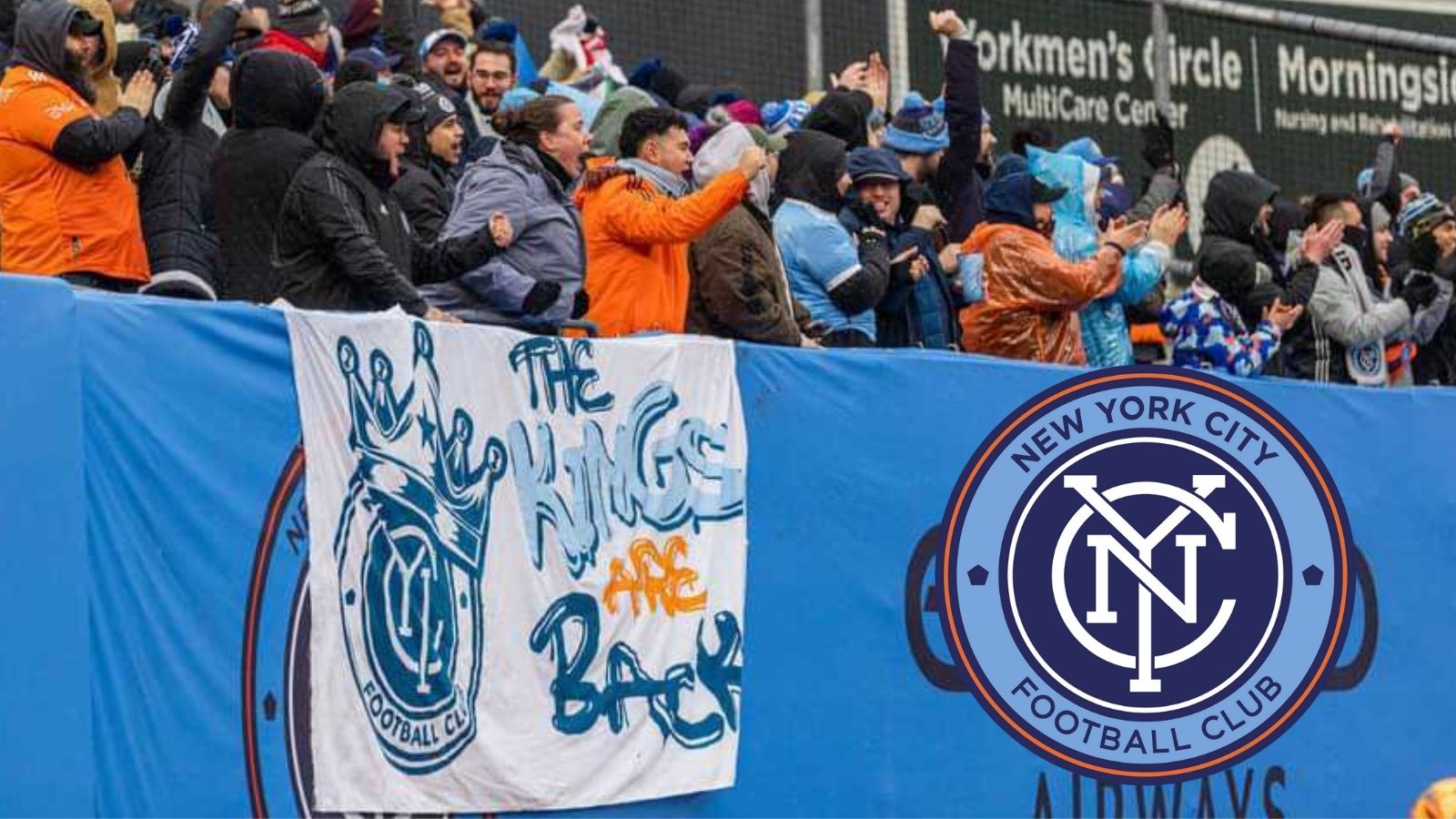 The day so many New York City FC supporters were waiting for had finally arrived. The boys were returning home as champions. We had all been stoked for this day since we watched them lift the cup in Portland on December 11, 2021. We envisioned a grand ceremony; the stands filled like they used to be, with everyone ready to welcome the champions back to the Bronx. Perhaps others around MLS would start taking us seriously, despite the lack of a soccer-specific stadium.

The reality was disappointing. March weather in the Northeast disrespected the occasion and brought below-freezing temps with constant rain in the morning and light snow in the evening; the forecast called for 1-3″ of snow and heavy wind gusts. NYCFC staff reported that the club was expecting a large turnout with nearly 20,000 tickets sold. At kickoff, less than half of the seats throughout the stadium were filled and even the supporters section appeared empty. The atmosphere felt like there were fewer than 10,000 in the stands.

Not only did the weather disrespect NYCFC, but its own front office did too. To be fair, sources affiliated with the Third Rail (one of NYCFC’s two main supporter groups) reported that the front office was bound by rules placed upon them by Yankee Stadium. Even so, the “ceremony” that took place for the 2021 Champions was abysmal at best.

It was clear that very few people understood what was expected of them during the whole proceeding. In a press conference on Thursday, NYCFC coach Ronny Deila, when asked what he expected of the banner reveal, reported he didn’t know anything about the ceremony. He joked that he hoped the team wouldn’t be needed on the field during the ceremony because they needed to warm-up.

The team certainly was needed on the field. YES Network and NYCFC commentator Ian Paul Joy was brought onto the pitch and did his best to hype the crowd up. There were awkward moments when he introduced Deila to the pitch, and no one immediately started walking onto the field. There was a long pause in between Ian Paul announcing the team and a video depicting the playoff run showing on the stadium screen. Half the team entered the field, and the other half followed when they realized they were supposed to be out on the pitch.

The worst part of this train wreck was the banner reveal. Emails sent to supporters earlier in the week encouraged them to be in Yankee Stadium by 12:40 PM to witness the reveal of the 2021 MLS Championship banner. Representatives from the Third Rail and Los Templados pulled up the cover to reveal the tiniest banner. To be fair, the Yankees’ pennants on either side of the banner for their World Series wins are smaller. But still, no one who didn’t know what it was supposed to say could have read it from the supporters section. Attached to the railing by zip ties, it will be easier to transport to all the different home stadiums we have. Hopefully, they’ll hang it in Red Bull Arena since that’s the only championship banner that stadium will ever see.

Regardless of how poorly the day started, the product on the field did not disappoint the few in attendance who braved the weather. Coach Deila and the reigning MLS champions made it clear that they were happy to be back home in the Bronx after seven weeks on the road. The Boys-in-Blue performed at a very strong level against an equally travel-weary CF Montreal and put on a show.

It was only fitting that the man who scored the Cup-winning penalty kick, Alexander Callens, blasted the ball into the net in the 7th minute. Pressure from NYCFC midfielder Keaton Parks resulted in a turnover near Montreal’s goal. Parks quickly lobbed the ball to Talles Magno in the box. Magno was able to make contact, not in the direction of goal, but rather directly into the path of Callens who held nothing back with his left foot. New York City took an early 1-0 lead.

The pressure of New York City FC on CF Montreal did not relent. Play after play, City was able to strip Montreal of possession and attack toward goal. In the 20th minute, midfielder Santiago Rodríguez intercepted a slow pass. With a flick of his foot, Santi found himself wooing the crowd with a chip into the goal. Montreal goalkeeper Sebastien Breza misjudged how much Santi’s shot would fall and watched helplessly as it gloriously fell into goal to double City’s lead.

CF Montreal returned to the pitch after halftime and began putting pressure back on NYCFC. A shot pinged off the goal post minutes into the second half. Zachary Brault-Guillard was finally able to score a goal in the 52nd minute with an assist from Djordje Mihailovic. Not even ten minutes later, Montreal was able to beat NYCFC goalkeeper Sean Johnson once again; however, the goal was called offside, and the visitors remained down 2-1.

The pressure spurred New York into action. Andres Jasson assisted Talles Magno in netting his first goal in Yankee Stadium, widening the lead again. With the team full of confidence, some players started to attempt some flashier plays. 2021 MLS Golden Boot winner Valentín “Taty” Castellanos attempted yet another Rabona, shooting wide of the goal by inches. Unfortunately, Taty had been heavily marked by Montreal defenders a majority of the game and was mostly invisible. That tactic effectively opened up the pitch for other NYCFC players to score, many of whom were happy to oblige.

Finally, with the pressure never-ending from NYCFC, Thiago Andrade picked off another slow pass by Montreal and quickly burst past the defenders. Bolting into the box, he took his shot and made it powerful enough to slip through Breza’s gloves and into the goal in the 83rd minute. With the final whistle, NYCFC won 4-1, remaining undefeated* in home opener matches since joining MLS in 2015.

NYCFC switch their focus back to international play as they face Comunicaciones in the second leg of the Scotiabank Concacaf Champions League this Tuesday, March 15 at 8 PM EST at the Estadio Doroteo Guamuch Flores in Guatemala City, Guatemala. City holds a 3-1 lead over Comunicaciones from the first leg. NYCFC returns home on Saturday, March 19, to host Philadelphia Union.

*Editor’s note: An earlier version of this post stated that this match was NYCFC’s six consecutive home opener victory. The club is in fact undefeated in home opener matches, registering no losses and two draws (0-0 with D.C. United in 2019 and 2-2 with Toronto FC in 2016) since 2015. This record accounts for the club’s first “home” match played in 2021 at Red Bull Arena. Additionally, the club is not undefeated all-time vs. CF Montreal. That record is now 4-1-1. The Editor regrets these errors.