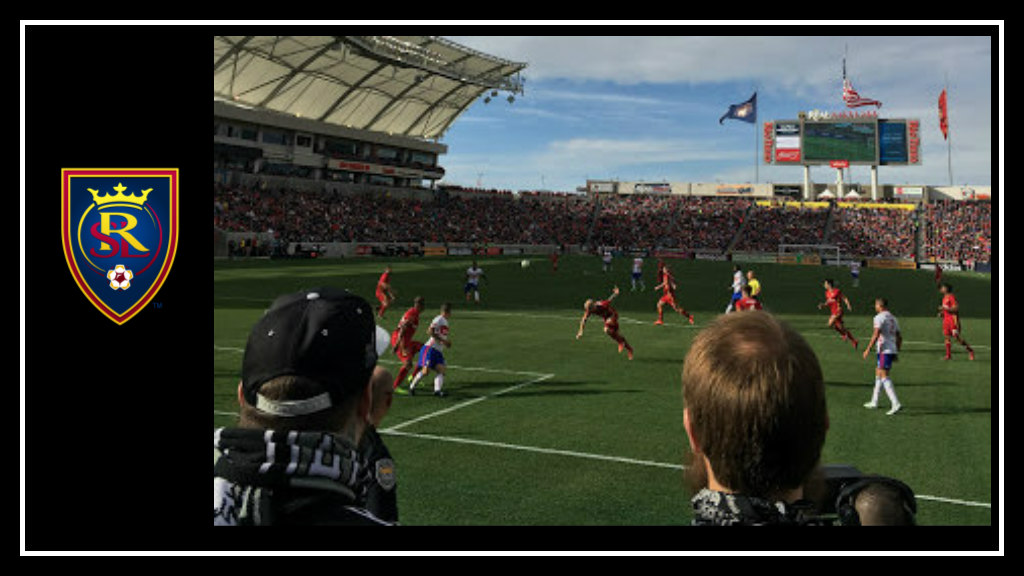 It was a beautiful day for a home opener in Sandy, Utah, that’s for sure. It was 55 degrees, a home brew festival was going strong ($5 got you an awesome pint glass and the ability to try home brewed beer made by the locals. What a way to start the day.), and even with the chill in the air, the VERY strong wind (that would ultimately affect that first 20 minutes or so of game play while the teams got used to the breeze), and the issues with our new ticketing system, we couldn’t hold still for the life of us. It was match day.

There was an audible buzz from the tailgate lot just north of the stadium, where most supporter groups for Real Salt Lake gather before the game. Section 26, RCB, SCU, La Barra Real, and many other supporters were all smiles and laughs as we waited for the game to start. Everywhere you looked people were hugging each other hello after months of not being in their favorite place: The RioT.

It has been a pretty big upheaval during this offseason. Some of our best players have left to other teams or retired, our backup keeper Jeff Attinella was chosen in the MLS Expansion Draft, and a few other players that we had gotten used to having around weren’t renewed for another year. In their place came a much younger crowd of players, some from RSL’s own academy (we now have 7 homegrown players on our team this year), Brooks Lennon from Liverpool FC, Albert Rusnak from FC Groningen who has done marvelous in the offseason, and we have Jeff Cassar for another year, at least.  A bit of a nerve-wracking start for any RSL fan, but once it was time, we all went in as quickly as we could.

All in all, we came away with a draw, 0-0 against Toronto FC. Possession was right down the middle, 50/50 with a lot of blocked shots by RSL and a penalty kick save in the 30th minute from the Wall of the Wasatch, Nick Rimando, which makes this his 130th shutout. Three players made their RSL debut this game, Albert Rusnak starting off with the team and Ricardo Velasco being subbed in for Jordan Allen at the  87th minute as well as Chad Barrett subbing in for Yura Movsisyan at the 69th minute of play.

Seven yellow cards were given this game, 3 for RSL and 4 for Toronto FC, with ranges from Dissent to Unsporting Behavior. One landed a PK for Sebastian Giovinco who now knows that PK’s aren’t worth breaking a sweat for Nick Rimando.

19,519 were in attendance for this home opener, and I can safely say this was an encouraging performance from RSL. Great job out there, boys. We’ll see you next week against Chicago Fire!