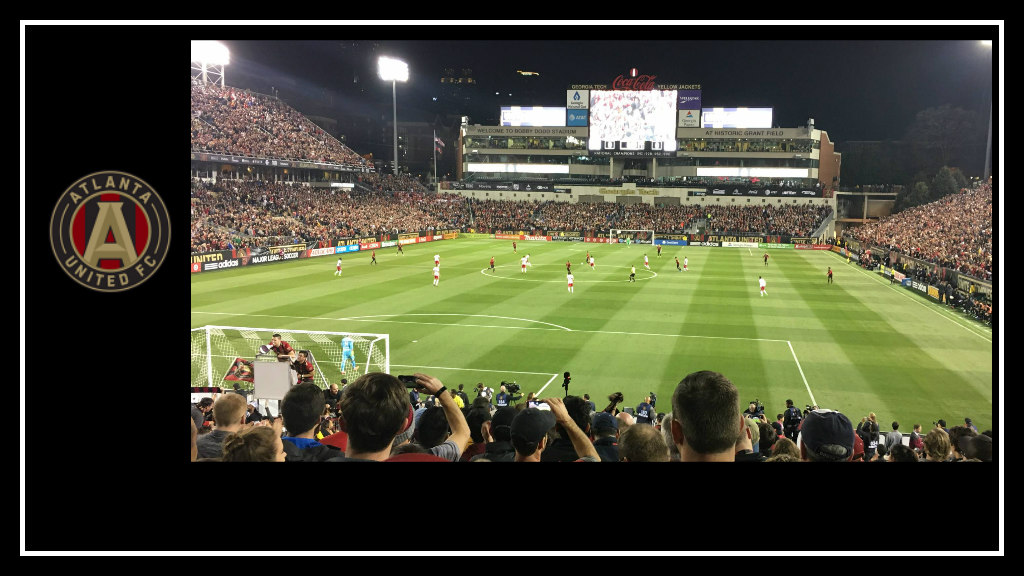 Almost 24 hours later, I’m still trying to process everything that happened Sunday. So much happened during the day that I almost don’t even remember the actual game itself at all. Fortunately, I remembered to record it so I’ve got it playing in the background while I write this.

I was so excited and anxious about opening day that I had to take some sleep aids on Saturday night to make sure I got some sleep. And then I woke up at 5am and forced myself to go back to sleep for a little longer. I woke up about every half hour after that until I finally gave up and got out of bed.

As I went through my morning routine, my head was filled with how I wanted this day to play out. As a member of leadership for Terminus Legion, the tailgate planning took over my week. Food trucks, games, beer, parking spaces…the list goes on. I arrived at the tailgate around 11:30am and paced for about an hour until the food trucks arrived to set up. Once everything was in place, I got to walk around and talk to people. And there were SO MANY PEOPLE. All four of the ATLUTD supporters groups were tailgating in the same lot, and combined, we have well over 1000 members, but there had to be 4000-5000 people in that parking lot. It was elbow to elbow and lines everywhere. Everyone was having a great time, though – I didn’t even hear any complaints when our kegs were tapped!

During my tailgate tour, I saw the MLS video crew walking around and tapped Susannah Collins on the shoulder to tell her I was her boss’ sister. Once the crew heard that, they were all too excited to get me on the live show, where Susannah and I played a round of Giant Jenga, so that was fun. I also did a quick Facebook live video interview with Doug Roberson of the AJC and leaders of the other supporters groups.

Seven hours after arriving at the tailgate, I finally walked through the 3rd Street tunnel to Bobby Dodd Stadium. I walked over to the Golden Spike and signed it. Walking up the stairs to the supporters section is when the goosebumps came. Standing in the supporters section and watching the players – OUR players – walk out for practice was when the noise really started. But it wasn’t until right at the end of the National Anthem that my eyes started to water. And then the whistle blew and it was game on!

I missed quite a bit of the first half due to the fact that I couldn’t find a spot within any of the sections and I walked back and forth looking for someplace to settle. I did, however, catch the first ever MLS goal (that counts – I saw plenty in preseason) for Atlanta United FC. In the 25th minute, Ty Mears lobbed a cross to the far corner of the 6-yard box and Yamil Asad slid in to push the ball into the goal. The noise at that moment was absolutely deafening. Everyone was jumping and screaming and hi-fiving. It was such an amazing moment.

ATL did have one additional chance late in the first half. Greg Garza passed to Josef Martinez, who shot it right at Luis Robles for a save. The second half saw a few more chances for ATL, but it was the New York Red Bulls who ended up with two goals to take the win. Carlos Carmona was shown a straight red card late in the second half after a rather deliberate and unprofessional foul.

Despite the loss, I walked out of the stadium with a smile on my face. I understand that the team has only been together for just over a month and they’re still working on getting their rhythm and that it will take a little time. I get that the majority of this team doesn’t have any MLS experience and may not have even watched a single MLS game before this weekend. Eventually, all of that will come together and the wins will come.

But 24 hours later, I’m still smiling because the moment I’ve waited for has finally arrived. Atlanta United is here. My team is here. And we’re not going anywhere. #UniteAndConquer