International Breaks are No Fun 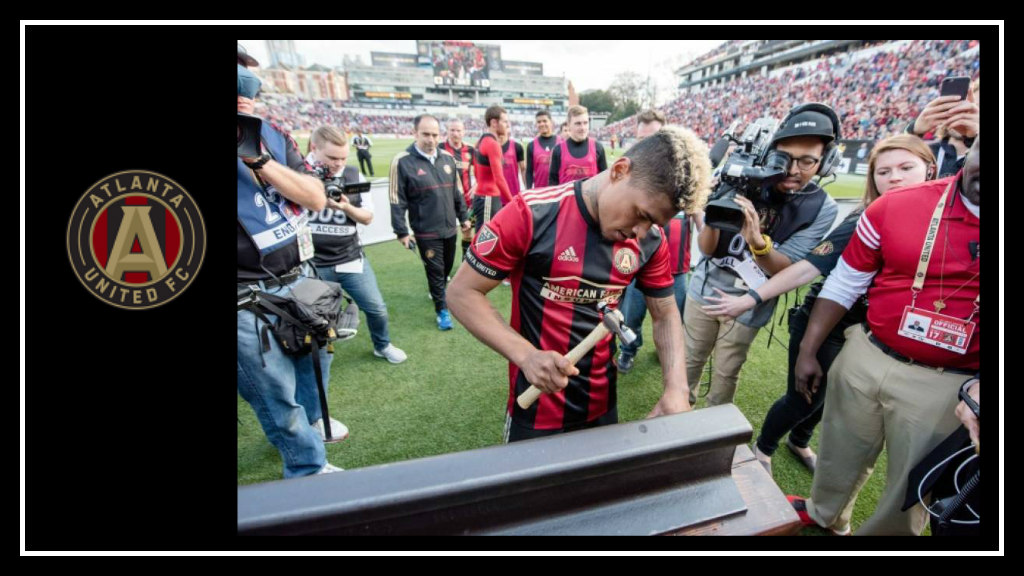 When you realize #ATLUTD doesn’t have a match this weekend pic.twitter.com/lhDe2XbJsh

Lucky for us here in Atlanta, there was an event to help us quell our thirst for soccer while a handful of our boys are on international duty. ATLSoccerCon held its second annual event today on the west side of town. Set up in an indoor soccer facility, there were supporter groups of ATLUTD and international teams, vendors, Subbueto games, and some jersey, scarf and memorabilia collections. Outside, there was the ever-present beer trailer, a food truck, and a giant foot darts game.

ATLSoccerCon was started by a few of my friends who are massive soccer nerds – and I mean that in the best way. Austin Long is a self-labeled kit nerd and regular podcaster, both on his own (check out his Soccer Nomad podcast here) and also hosts the Terminus Legion podcast (you can find those on Soundcloud and iTunes). Jason Longshore is an editor for the Atlanta United blog, Dirty South Soccer (my favorite source of ATLUTD news), runs soccerdownhere.com, and also happens to be a commentator for the ATLUTD game broadcasts on local radio station 92.9 The Game. He kind of knows his stuff, especially when it comes to Atlanta soccer. JR Francis is a marketing and design guru – he’s the designer behind the Terminus Legion logo (along with tons of other designs). He’s also got the most massive collection of jerseys I’ve ever seen.

A good time was had by all in attendance at ATLSoccerCon and it took our minds off of the injury that Josef Martinez suffered during Thursday night’s Venezuela – Peru game, if only for a few hours.

From what we hear, it’s a left thigh injury. He came back to Atlanta and was scheduled for an MRI today, but no word as of yet what the results were or whether he will be available for Friday night’s game at Seattle. At least we know he’ll be around for a while, though, since ATLUTD  finalized the permanent transfer of Martinez from Torino this Tuesday. Oh, and Martinez also won MLS Goal of the Week for this shot in the ATLvCHI game:

Meanwhile, Miguel Almiron played for Paraguay, also on Thursday, in a 2-2 draw with Ecuador, Carlos Carmona stayed on the bench for Chile’s 1-0 loss to Argentina, and Kenwyne Jones played 84 minutes for Trinidad & Tobago in their 1-0 win over Panama.

In other news, this article by Doug Roberson of the AJC made my day, specifically this quote from ATLUTD’s rookie sensation, Julian Gressel: “On the field, I remember in the second half, you are on the field and you hear the main supporter’s section going ‘Atlanta’ and the rest of the stadium go ‘United.’ I was on the field and I had to take a deep breath for a second and regroup to focus on the game again. It was breath-taking. It was unreal.” The new hashtag #GresselMania is also a thing here in Atlanta, much to the amusement of some of Gressel’s teammates.

Find out with @ATT Mic’d Up 🔊 pic.twitter.com/QgY3zXiicX

ATLUTD has a four (FOUR!!) game road trip coming up this month, mostly to accommodate for Georgia Tech’s spring football games. Our first major test of the season will be next Friday’s game at Seattle, especially now with Clint Dempsey appearing to be in top form after the USMNT’s rather decisive victory over Honduras last night. Holy cow.

In the meantime, since ATLUTD aren’t playing tonight, I’m getting my live soccer fix by watching some former Atlanta Silverbacks players (Poku and Chavez for Miami and Paul Black for NCFC) in the North Carolina FC vs Miami FC NASL season opener. Yay for random cable networks I never knew existed! The game just ended as a 1-1 draw. Good to see those boys in action again this year!

See y’all next weekend when hopefully I’ll be reporting some good news after SEAvATL!

One thought on “International Breaks are No Fun”