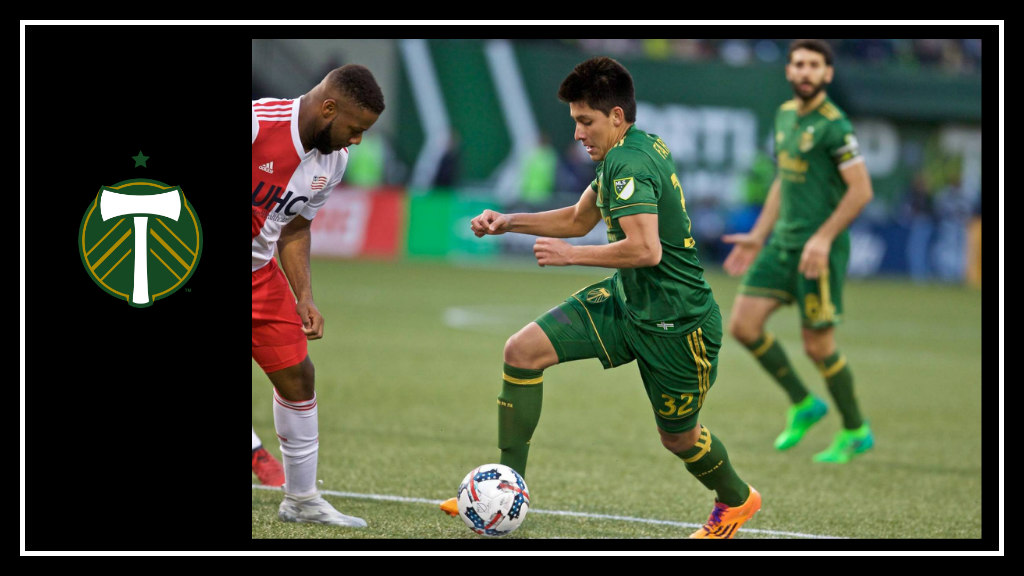 Sunday was a beautiful evening for soccer in Portland. Another sold out crowd at Providence Park gathered in anticipation. Darlington Nagbe and David Guzmán were home from international duty. Marco Farfan, the local homegrown talent and Centennial High School senior, was going to get the start in front of family and friends. And scoring machines Fanendo Adi and Diego Valeri would have the chance to test a New England Revolution team that could prove as dangerous on the counter as the Timbers. And for a time, we weren’t disappointed.

First: that goal. Oh, my goodness. Valeri’s strike at the twelfth minute was one of the prettiest I’ve seen at Providence Park, and is surely already in the running for goal of the year:

Diego Valeri opens the scoring! What a hit! #PORvNE pic.twitter.com/jJqXeOqKPF

Then: Marco Farfan. Absolute poetry. My seats are on the west side of the stadium, which means that when he is working as a fullback I get a great up close and personal look at the action for half of the match–and oh my GOODNESS. It was hard to remember that Farfan is still only 18 as I watched him repeatedly own Kei Kamara. Farfan won eight tackles in his home debut and put in a confident, competent performance, pushing up well and defending his territory brilliantly. If he didn’t finish his spring break homework I hope he can turn in a condensed match report for extra credit.

The Timbers were working the ball well that first half, maintaining confident possession and a one goal lead going into the half. And then…

You know that moment in a horror movie when everybody in the theater seems to know what’s about to happen, but for some reason the characters don’t? When you want to shout at the screen “No, that is NOT just the wind making that scraping noise!” “No, you should NOT all split up and head out separately into the woods!” “No, the bad guy is NOT dead and if you turn your back on him he WILL get up and brain you!”

That is pretty much how the second half felt.

And instead we watched in gathering dread as the team seemingly started the half in second gear; as Sebastian Blanco missed chances wide; as we didn’t have numbers inside the box when we needed them…and as this happened:

Lee Nguyen cleans up the rebound and New England are level! 1-1. #PORvNE pic.twitter.com/O32bMNfiU8

Yep. Told you so, said pretty much everyone in the park. I TOLD you if you didn’t take care of business that the bad guy in that horror movie would get back up and brain ya.

I’m not sure where to lay the blame for this one. Yes, Jake Gleeson misplayed the ball. But if Roy Miller had done the defensive job required, the ball wouldn’t have been a threat in the first place. And if Nagbe had been trailing in the box more for second chances, we might have had a second or third goal, which would likely have iced the game even with the defensive lapse. And if we had used, say, Dairon Asprilla or Darren Mattocks, maybe they would have provided a late offensive spark that would have shifted the momentum in our favor.

Regardless of the reason, Lee Nguyen (who to be fair was not in fact a horror movie bad guy, just a talented player doing his job) leveled the score late in the match, and the Revs took a point in Portland.

Disappointing, to be sure, but yes, a point is better than none. And we are still ahead of our typical March/early April performance in MLS. But the firepower of this team has raised my expectations. One goal at home, especially with acknowledged weakness in the center back position, is not sufficient. I hope we score early and often next weekend, and that we don’t take the foot off the gas pedal in Philadelphia until the final whistle.

I got to meet an amazing young man this weekend. Dylan Mapston is a 12-year-old Timbers fan and goalkeeper who lives in Phoenix, Arizona. You can read more about Dylan here. Dylan’s two-year-old cousin, Cheyenne, lives in the Portland metro area and is undergoing treatment for a cancerous growth on her spine (more information and fundraiser here). Dylan has started an effort to raise awareness for children with cancer and to give back to those who are fighting this disease. Dylan and his father flew out to Portland for the Timbers and Thorns matches this weekend, collected teddy bears and toys donated at both matches, and delivered them to Doernbecher’s Children’s Hospital.

Soccer may be the thing that brings us together, but sometimes it inspires something much greater. It was a privilege to meet Dylan. I’m grateful for his inspiration and perspective, and for demonstrating the Team/Town/Timbers Army connection we know and love. I hope we meet again soon.