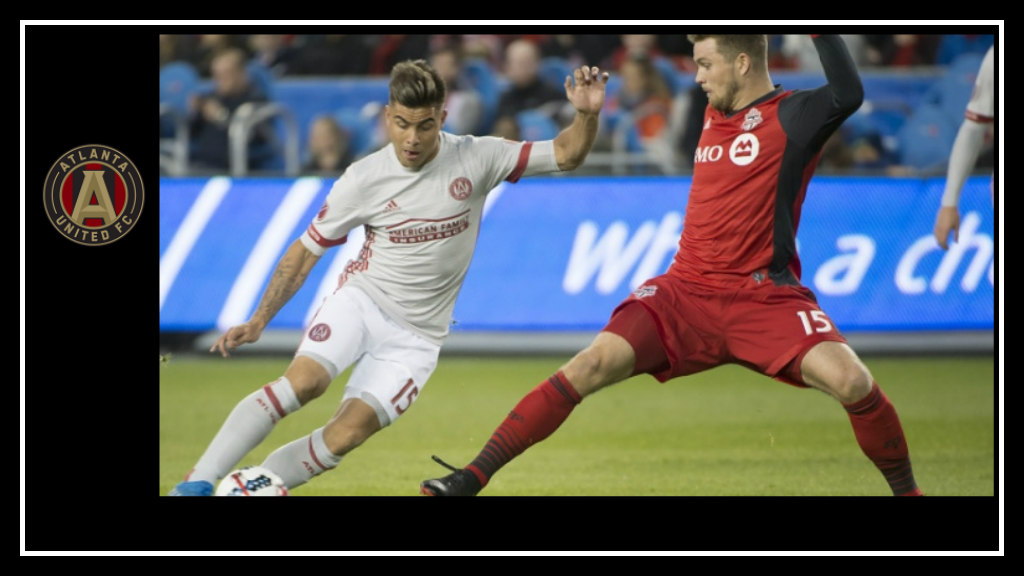 Atlanta United FC have earned themselves some serious respect around the league these last two games. Splitting points with both of last year’s MLS Cup finalists is pretty impressive. Tito Villalba found his fire, Miguel Almiron and Carlos Carmona were back in the starting lineup to fuel that fire, and Decatur-native goalkeeper Alec Kann had a hell of a game.

I’m happy to say that Tito is working really hard to prove me wrong. Last week, I said I didn’t think he was a natural forward – and I’m sticking by what I said, but he certainly improved this week. Tito was ATLUTD’s Man of the Match last night with a brace – and what golazos they were! The first goal of the game came in the 15th minute on a perfect through pass from Miguel Almiron to Tito on the right. Tito’s shot went right through Toronto FC goalkeeper Alex Bono‘s hands and into the net. His second goal came a little over a minute into the second half. Leandro Gonzalez Pirez sent a pass that Tito grabbed and then fought his way into the 18 with Chris Mavinga, ending with a shot that went right through Bono’s legs.

It was great to see “La Banda” (almost) completely back together on the field last night. We’re still missing Josef Martinez (two weeks down; 2-4 weeks to go), but in the meantime, it’s great to see Almiron and Carmona back in the starting lineup. Almiron had a couple of shots last night, including an amazing one that should have gone into the upper 90, but was deflected by Bono’s fingertips.

Unfortunately, Yamil Asad got sent off for getting an elbow to the back of Eriq Zavaleta‘s head in the 75th minute. I thought it was unintentional (and maybe embellished a bit by Zavaleta?), but it is what it is. We’ll just have to wait and see what DisCo says about it later this week. On a sidenote, I was wearing my away jersey with Asad’s name and number on it last night at our watch party and felt like I should have gone home when he was sent off.

While watching the replay today, I also heard (it was too loud to actually hear anything last night) that one of the ATLUTD assistant coaches was sent off in place of Tata Martino. From what I understand, Tata was arguing with someone about Toronto’s head coach Greg Vanney talking to Asad before he was sent off. Haven’t heard any more about it since then, so I’m not sure what actually happened.

ATLUTD managed to hang on, despite a couple of close calls, thanks to goalkeeper Alec Kann, who has been fantastic in goal so far this year. So much so that many fans in Atlanta are wondering why we’re even bothering to bring in Brad Guzan this summer. How that fight for starting position goes remains to be seen, but it’s something we’ll revisit in July when Guzan gets to town.

Last night saw the first goal against ATLUTD in over 260 minutes, which only proves how good of a job our defense has been doing already this season – a bit of a happy surprise for the fans here. Up until a few weeks ago, we thought we’d be scoring tons of goals and letting almost as many in, but that doesn’t seem to be the case. At this point, ATLUTD has scored 13 goals, and has let in only 5. A goal differential of +8 is quite a nice cushion, but some more Ws would be preferred.

We are currently sitting tied with Chicago Fire for 2nd place in the East with 8 points. That could change, depending on the results from this afternoon’s ORLvNY game – a win for either of them would put them in 2nd. I can’t say I’d complain about either spot – I certainly didn’t expect to be this high up in the standings at this point in the season. It’s a great feeling and I hope it lasts well into the summer.

At this point, though, I’d settle for having the boys home for a game for a change, but we’ve got two away games before that. Next week, ATLUTD remains on the road, and back to Canada to take on Montreal Impact and the following week, they’ll be out in Utah to take on Real Salt Lake. Three weeks till ATLvDC at home, but it can’t come soon enough!