This Win is So Metro 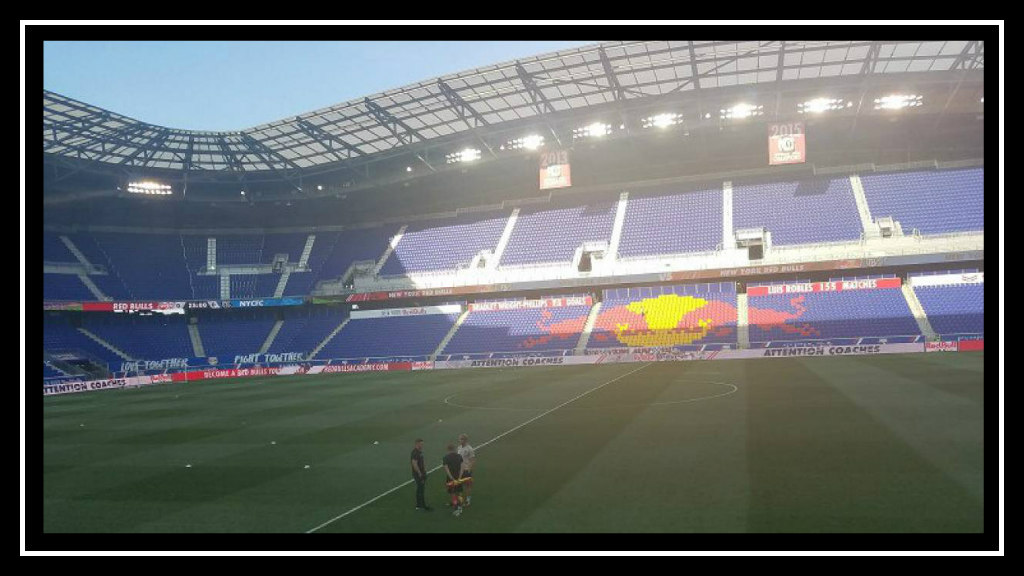 I was in the press box for this New York matchup. The press access is a completely different experience than any I’ve had at Red Bull Arena. The only rule was that I couldn’t be a fan– business casual dress, no fan gear, no asking for autographs or selfies. A fair trade for the view. There was food and drink available, as well as a workspace for taking notes during the game. I fully enjoyed the game from my unique vantage point, and I look forward to having the opportunity to visit the press box again.

The New York Red Bulls (6-7-2, 20 points) took on NYCFC (7-5-3, 24 points) in the Lamar Hunt Open Cup, a tournament open to professional and amateur soccer clubs throughout the US. It’s a time for Cinderella stories (like Christos FC and the LA Wolves, coached by US Soccer Hall of Famer Eric Wynalda), but it’s also an opportunity to get in some extra battles between regional rivals.

There was no doubt this game was going to be chippy. I don’t think the fans would have it any other way. Having a colleague who is the official reporter for NYCFC, I can appreciate a healthy amount of banter. This is not the first time I have been to Red Bull Arena for a matchup against NYCFC. It was electric even then, the hottest day of summer 2016. But this was a much more comfortable evening in more ways than one. Gathering up my gumption, I applied for a media pass and got approved. So, on a much cooler evening, I got to see the game from the press box just above the Red Bulls bench.

Biggest news of the evening is the end of the Iron Man streak: Goalkeeper Luis Robles did not take his place in goal after 155 straight matches. Ryan Meara, GK for the USL-trophy winning RBNYII, took his place in the net. While he had his work cut out for him, Meara was up for the challenge, making 3 saves throughout the game. Most notably was in the 16th minute, when NYC midfielder Tommy McNamara nailed a shot at Meara, who caught enough of it to send it bouncing off the crossbar and the ground a couple of times before getting cleared. I can’t help but wonder if the moment will be used in the argument for VAR. Then in the 40th minute, NYC striker hit the far post and Meara grabbed the ball as it bounced out again. The goal frame proved a formidable member of the RBNY defense.

During the entire first half, RBNY was capable of breaking up the counterattack but they were subsequently running more than playing (a common complaint in MLS).

After a scoreless first half, Dani Royer was subbed in for Grella at kickoff for the 2nd half. The expected chippiness of the rivalry continued to grow, with a total of 29 fouls committed by both sides.

Tyler Adams, fresh off his run with USMNT U20s, continues to amaze in the defense. Adams’ frustration was visibly increasing in the attacking third. From my vantage point, I could see what Adams was trying to create, but his teammates just weren’t cooperating.

Finally, the stalemate was broken by a goal in the 67th minute from Royer following an assist from forward Bradley Wright-Phillips. BWP lured NYC GK Sean Johnson off his line and allowed Royer to tuck it home. RBNY were able to hang onto that lead for the rest of the match and advance to the Round of 16, where they will face the Philadelphia Union. As for NYC, they’ll be back for league play on the 24th, the game following RBNY’s next league match on Sunday the 18th, against…. the Philadelphia Union.

I guess that’s what is known as the “magic of the Cup”.