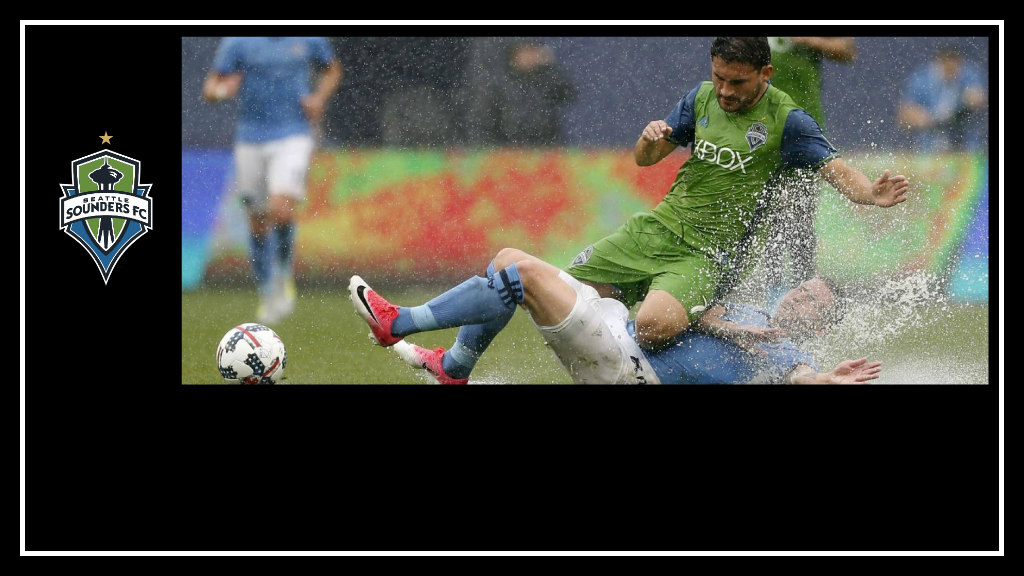 The Seattle Sounders lost 2 goals to 1 against New York City FC on Saturday in a wet and slippery Yankee Stadium. Clint Dempsey and Jordan Morris (USMNT) Joevin Jones (Trinidad and Tobago), Oniel Fisher (Jamaica), and Roman Torres (Panama) are all back from their national teams. The Sounders lined up in their typical 4-2-3-1, playing all their returning internationals but Roman Torres.

The game kicked off just as fans in Seattle were waking up, fans in New York were being poured on. The teams settled in, with the occasional chance resulting in someone looking like they were on a slip-n-slide (seriously, check out the photos and GIFS from the game. They’re hilarious). Both teams had trouble with the standing water on the field, the ball would stop and players had trouble kicking it. Neither team had a dangerous chance until the Sounders struck first with a goal from Cristian Roldan in the 40th minute.

The New York defense turned the ball over near CR7, who passed it to Harry Shipp, who then passed back to Roldan. The ball deflected off a defender then off Clint Dempsey and found its way to Roldan’s feet. Roldan kept running with the ball, and opted not to pass to Dempsey and scored the opening goal (seriously why is this guy not on the national team??).

In the second half, the ref awarded a penalty for Oniel Fisher “pushing” David Villa in the back. While I don’t think he dove, I don’t think he was pushed, my thought is that he slipped with all the water (but hey, I’ll always have a soft spot for Villa as a Barca fan ;)). Anyways, Villa equalized so congratulations on your 50th goal for NYCFC David*.

The Sounders subbed in Will Bruin for Harry Shipp, moving Morris back to play Shipp’s role and Bruin to be the lone striker. The Sounders had several dangerous chances following the sub, but didn’t capitalize on any.

In the 77th minute, David Villa scored again* for NYCFC on a cross from Jack Harrison. This sunk the Sounders ship for good, Seattle never found an equalizer.

*seriously Villa, you couldn’t have waited until you play Portland?!?!?! ok i’m over it

*seriously Cristian Roldan should be on the national team. He and Jordan Morris could use their BFF powers for good. They could be like Captain America and Wonder…Man? And maybe it’s just me, but I would LOVE to see a USMNT that had DeAndre Yedlin, Cristian Roldan, Clint Dempsey, Jordan Morris, and Christian Pulisic all playing together.

2 thoughts on “SLIP-N-SLIDE IN NYCFC”