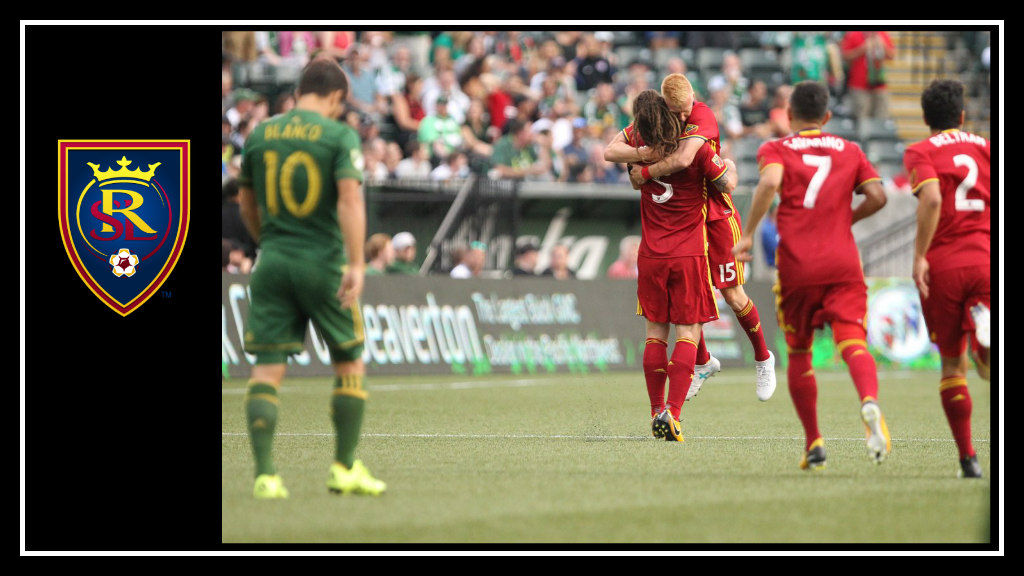 When you wish upon many red cards…

After four losses and four draws against the Portland Timbers the last 8 times we played against them, Real Salt Lake finally managed to defeat them, 4-1 in Providence Park.

I am the third week into my new job. The pressure is REAL, guys. This is not a ReAL pun, I promise. REAL vs ReAl etc… I dunno. Although if I were more clever I would probably make one right now. But it’s been a pretty busy few weeks (sorry for my absence) and I have to start the game off with the announcers asking our previously beloved Nat Borchers how he thinks both teams will do. Have you ever had stabby pains in your heart? That was a thing. Dang, announcers. Why do you have to do this to me before the game even starts? That was cold announcers, that was cold.

Alright. Let’s move on. We’re coming off of a friendly against Manchester United. We didn’t win, but I mean… we gave up 5 goals to Houston and RIGHT AFTER THAT gave up 6 goals to FC Dallas so… I’ll be honest, I wasn’t expecting us to do as well as we did. The fact that we scored on Manchester United first in the beginning was a shining light in my evening. But this isn’t about *that* game (although let’s just call me out on not writing about that game, eh?). So hey. We’re two days out of a friendly against a pretty big team. We go against a team that we’ve been very evenly matched against. Heartstrings already torn, we open the game.

10 minutes innnnnnnnnn. I hope the multiple “n”s will express to you that this, in fact, was a sing-song moment. Oh captain, my captain. Kyle Beckerman kicks a goal in from 30 yards away, weirdly out of nowhere. I honestly didn’t see it, and it seemed like no one really did until it was happening. But there it was. The first time I’ve ever said ‘Wow’ out loud for a Beckerman goal in a long time. Definitely his goal of the year. And it put us in the lead for the entire first half,  1-0. This is his 421st game, and way to go, Beckerman.

Honestly, even with that early goal Portland did keep up the pressure. They were down quite a few players, and even with that they were still able to create some chances for themselves, ultimately not able to follow through with the first half ending 1-0 Salt Lake, along with both teams collecting a yellow card or two.

The card-packed, controversial (I’ll get to that in a moment) second half opened up with a yellow card with the first minute, against Danilo Acosta who had just barely been put in the game at half time. With this second half off to a slow start it seemed unlikely that we would be seeing scores so soon, but a PK was rewarded to Real Salt Lake, with Joao Plata hitting into the net at the 50’ mark.

From there, it seemed chaos took over. At the 53’ mark Arboleda gets a red card for (imho) what looks like a pretty clear elbow to Plata’s neck. Not only was it out, but it was out, and up, and followed through. I will say that was a pretty solid red in my opinion. So now Portland is down a man in the 53rd minute while they’re also down by two points. Not a good place to be.

But oh. Things get so much worse. For both teams. Simultaneously, and very fast.

That one time that Adi lost his mind. pic.twitter.com/qPSKARo58x

Insert unpopular opinion here: Kyle Beckerman definitely should have gotten a card here. A red…. Eh? If what he did deserves a red then there have been a LOT of missed red opportunities over the years of MLS being a sport. Games would end short-handed literally every single game. I will say this – Kyle did this on purpose. He agitates, and every other team knows this (I told you this is an unpopular opinion).

BUT. Here’s where things get hairy for me: Fanendo Adi comes up to Kyle and straight up chest bumps him down to the ground. While Toledo (ref) marked down Beckerman’s elbow as ‘Violent conduct’ he also gave both Kyle and Adi the SAME disciplinary time away from game play. That seems a little uncouth to me. Adi straight up knocked a dude to the ground while Kyle threw an elbow that ultimately left Adi running, even after he was hit, until he decided to let his anger get the best of him and make him turn around. One of those things is definitely not like the other.

As an update on that, RSL did try to appeal the red card and the appeal was denied, so Kyle will be out for the July 22nd game against Sporting KC.

I digress. After a double red with that play, both teams missing men (Portland down to 9, RSL down to 10) we quickly scored two more goals. The 3rd goal was awarded to Albert Rusnak but was first marked as an own goal on Gleeson.  Either way it was a fast one, and Albert’s 5th for the season so far. This kid is impressing me so much. Wow.

Our last and final goal of the night (from RSL) was another one from Plata, right at the 80th. He’s coming back strong after that surgery. We’ve now scored an equal number of goals in these last two MLS games combined than we had in the past 12. So it’s safe to say we’ve been needing this.

Here are the game highlights:

83′  Substitution: Out: Sunny In: Aaron Maund