Sunshine On BMO: 4-0 Sweeping of NYCFC 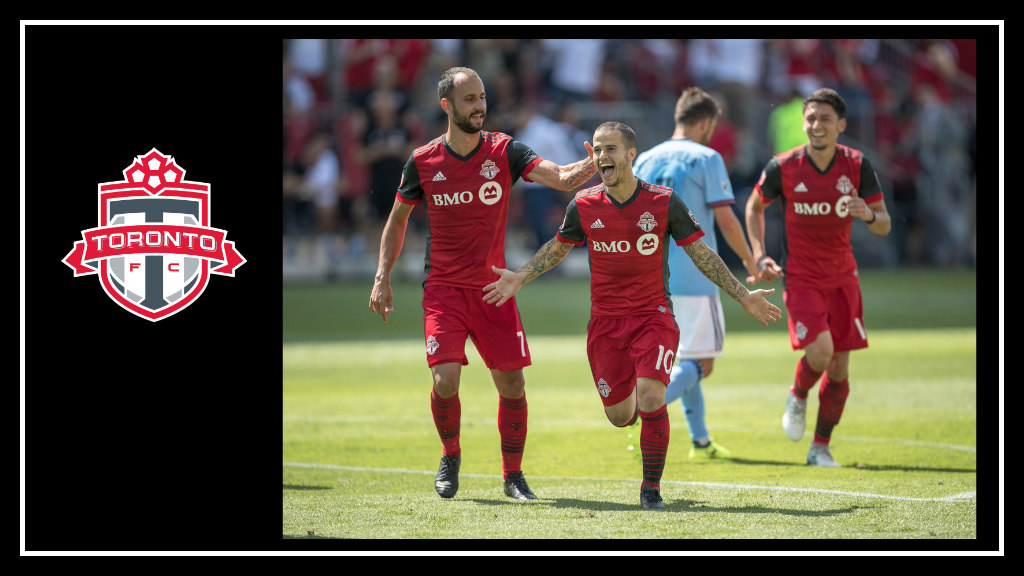 Song of the Match: Walking on Sunshine – Katrina & The Waves

July was a month of firsts for Toronto FC. First new contract for a manager, first MLS goal for not one, not two, but three players and all Canadian to boot; and of course first place for a lot of the month. I can only speak for myself but I’m a little sad to see it go, but optimistic to see out the summer.

Congratulations are in order for Raheem Edwards’ first MLS goal. It didn’t dawn on me that it was his first until hours later when I happened upon Jay Chapman’s tweet congratulating him. It seemed absurd that his first goal came in the dying embers of July when all season he’d been making huge contributions to the team, be it just by coming off the bench and injecting the team with some much needed energy, or handing out assists like gifts. He’s become so important to the team’s success I nearly forgot how new he is to the scene, not to mention how young.

Massive win today! Thanks to all the fans for the great support today, and congrats to my guy @Rvheem_ on his first MLS goal! 💪🏻#top

It was a beautiful afternoon for a beautiful game in our beautiful stadium. The whole day had a glow about it. It’s safe to say at this point that Toronto FC loves playing NYCFC, and Sebastian Giovinco loves it most. In the past year Toronto FC have managed to absolutely steamroll NYCFC 13-2 across 4 games with Giovinco bagging a hat trick in one and a brace in another.

The highlight of the game for me came from the blessing I have to be a Season Seat Holder in the south end Supporters’ Section of BMO Field. I got to bear witness to a small moment not entirely caught on camera that is one of those moments that reminds me why I love the beautiful game.

It was the 75th minute and Toronto FC were awarded a penalty; Giovinco got to the ball first. He picked it up and held it against his chest. He could probably taste the hat trick only seconds away from his clutch. But then he must have thought of Jozy Altidore, of the players we had just gotten back from International Duty and whom Seba looked absolutely delighted to be reunited with. Especially Jozy (the jumbotron had been playing a slow-motion replay of Seba running into Jozy’s arms on the first goal throughout the game).

He marched up to Jozy and proffered the ball to him but Jozy said no at first. The second time Seba held the ball out to Jozy he took it reluctantly, and a hush seemed to fall over the south end. We had seen Jozy miss penalties before, and he looked none too comfortable as he set the ball down and stood back for the whistle. “Come on, Jozy!” a few of us yelled in support.

If Jozy had turned for one last look at Seba in that moment, I’m sure Seba would have offered a wink and a thumbs up. It was with the confidence of Seba, the rest of the team, and the fans that Jozy stepped forward and keenly shot the penalty kick home, effectively burying NYCFC by making it 3-0 with only 15 minutes remaining. Of course, Raheem would hammer in the nails at the very end with our 4th.

That show of sportsmanship is extra special to me coming from Seba, who was accused of selfishness early this season for an outburst. As a Toronto supporter, nothing makes me happier than seeing players come to our city and learn to love Toronto and the team. Seba showed that on Sunday with his enthusiasm, work ethic, and team effort. There’s no better ways we could have asked for to close out the month than 4 goals and a clean sheet in the Six and in the sun.

My only point of contention? I’m a bit perturbed that Jay Chapman lost a starting spot though it was not unexpected. He will perpetually face the issue many of our Canadians guys face which is to compete in a deep squad, particularly in the midfield, and Jay has it the hardest when guys like Michael Bradley and Victor Vazquez are effectively pushing him out of the team. Still, he came off the bench and got the minutes he deserved so I can’t say I’m too disappointed.

Quick shout out to the David Villa jersey wearing NYCFC fan who travelled from New York to stand in the Supporters’ Section. I’d apologize for the torrent of chanting you endured but it was just way too much fun taunting you for the majority of the second half. Thank you for being a good sport about it and my condolences that you chose to stand amongst the most loyal of Toronto FC fans.

Here’s hoping that August is as fruitful as July! See you all this weekend when TFC travels to D.C. to face D.C. United on their home turf.