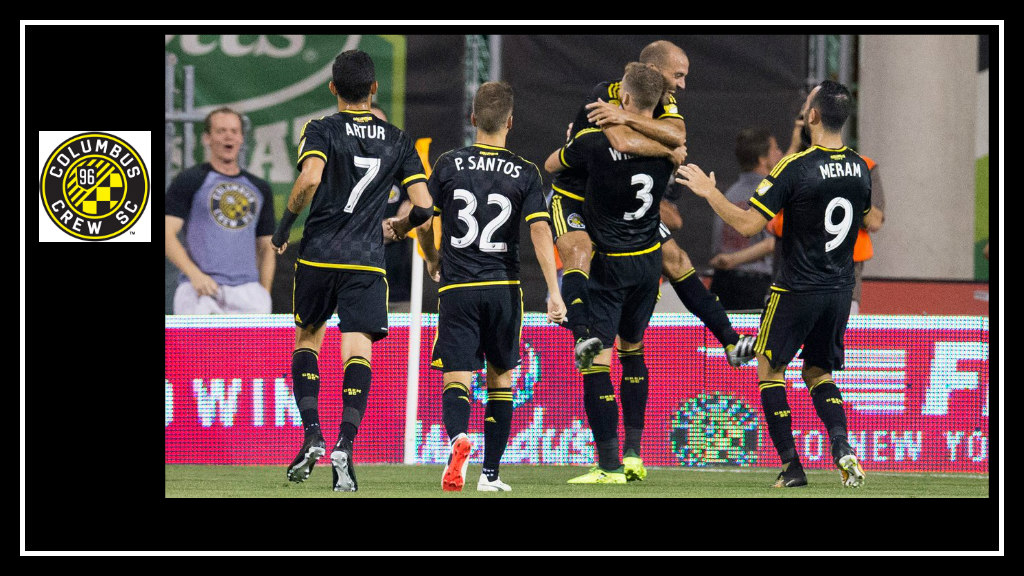 While the calendar says September, Saturday night at Mapfre Stadium felt like the middle of July as Columbus Crew SC took on the New York Red Bulls in the continued hunt for a playoff spot.

Crew SC rolled out the same line-up that started at Vancouver with two exceptions–Mensah returned at centerback and Justin Meram returned to left wing.  This time, however, we had a different result than Vancouver with a 3-2 win for the Black and Gold.

Scoring started with Crew SC in the 6’ as Higuain sent in a free kick that Mensah headed into the net.  You could see the joy on the center back’s face as he celebrated his goal with the team.

New York was quick to tie it up in the 14’.  Columbus felt one of the New York players had been offsides, but the AR did not make the call and Bradley Wright-Phillips finished the goal.  BWP was given much too much space regardless.  With a goal scorer like that, defenders should not give him any space.

Santos was fouled in the 39’, but the ref let play continue on to the Crew’s advantage.  Ola Kamara, virtually alone as a defender tried to catch up with him, tried to chip the keeper to tie the game, but he overshot the goal.  Kamara continues to miss the chances you think he should finish and finish shots that look nearly impossible.

Crew SC took the lead again in the 54’ when Meram took on two New York defenders and shot the ball into the net.

In the 66’, Josh Williams who apparently didn’t want to be outdone by his center back partner decided it was time for a goal.  His first since 2013.  He headed in a Higuain corner kick for goal number three of the game.

New York wasn’t done yet.  In the 69’, Mensah fouled Gonzola Veron.  There was some heated argument from both sides as the foul occurred outside the field of play but kept Veron from getting to the ball.  After video review, the Red Bulls were granted the penalty kick, which Veron finished.

Crew SC was able to hold the Red Bulls off resulting in a victory and 3 more points toward making the playoffs.

Some thoughts on the match:

Pipa had all three assists in this match.  He continues to show why he is a central cog for this team

Meram scored a goal.  It was pretty.  However, there are a lot of times when he should pass and doesn’t.  I don’t want him to stop trying to take on defenders.  I just wish his judgment on when to do this and when to pass would improve.

The refs in this game were horrible.  As a player, I was always taught you play the refs’ game.  Arguing calls wasn’t going to help, so you don’t.  Those words to live by would have gone down the drain had I been a player on the field on Saturday night.  I think the officiating wasn’t great for either team.

After the Red Bulls scored their second goal, I grew concerned that this would turn into another game like Vancouver where they scored to tie it up near the end of the game.  Or, it would be like earlier in the season where we gave away a lead.  I was pleased to see that Crew SC can finish out a match as I’m sure this skill will be necessary if we plan on winning any playoff games.

I do not understand Sacha Kljestan’s moustache.  Please someone explain it to me….

This season has gone incredibly fast and next Saturday is Columbus Crew SC’s last regular season home game against DC United.  It would be nice to get 3 points from this match and help solidify a playoff spot.