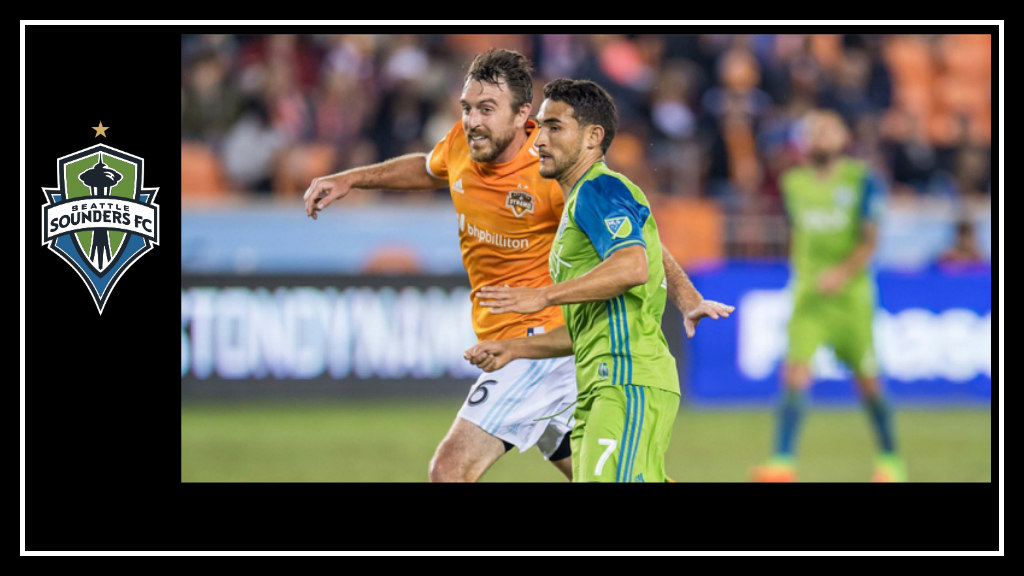 Jingle bells, Jingle bells.
Jingle all the way.
Oh what fun it is to see,
Seattle win away!
Is it a little early for Christmas music? Maybe. Is this song totally appropriate? Yes.

The Seattle Sounders took a 2-0 win in Houston in the first leg of the Western Conference Final. It was a very chippy game with many cards and fouls, but Seattle ended up on top.

The first goal came in the 11th minute when Gustav Svensson headed home a Nicolas Lodeiro corner kick. That was the 2nd goal of the season for the Swedish international.

In the 27th minute the game went downhill for Houston. Defender Jalil Anibaba took Joevin Jones down in the box resulting in a DOGSO (Denial of an Obvious Goal Scoring Opportunity) red card and penalty kick. Lodeiro went up to take the kick, but goalkeeper Joe Willis guessed correctly and saved it.

However, in the 43rd minute Will Bruin doubled the lead and scored a header goal (assisted by Joevin Jones).

Fun facts about this match:
Will Bruin scored against his former team of 6 years. His 2nd time this year.
Clint Dempsey grew up about 2 hours north of Houston, so a lot of his family and friends were at this game.
Roman Torres will miss the next match because of yellow card accumulation.
We saw two former Sounders on the field with Dylan Remick and Jalil Anibaba playing.

Our job here is done… Time to come back home. #DefendOurCup pic.twitter.com/6YeVHVFZbF

Prior to this match, the Sounders were 0-4-4 in Houston, making this their first win in Houston.

The Sounders are heading into the second leg of the Western Conference Final with a 2-0 lead. The next game will be in Seattle on November 30th, the winner on aggregate after the 2nd leg will advance to the MLS Cup Final on December 9th.