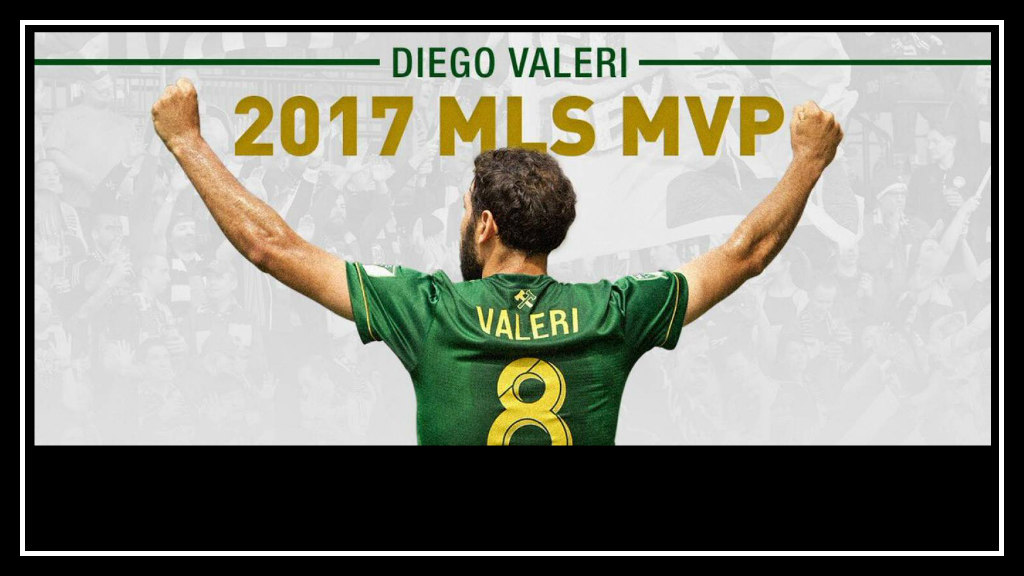 It is official: Diego Valeri is the 2017 recipient of MLS’s Landon Donovan Most Valuable Player Award.

We know him as El Maestro, Troesma, and DV8. Today, we call him MVP. Congratulations on a historic season, Diego. We are so proud to have you in Soccer City USA. #RCTID #MVP pic.twitter.com/GujgiN3EbG

An amazing combination of ruthless accuracy on the pitch and self-effacing modesty pretty much everywhere else, Portland Timbers’ midfielder and playmaker Diego Valeri is this year’s runaway selection for most valuable player by every measure and constituent group that has an actual vote. Players, clubs, and media folk all overwhelmingly declared Valeri their favorite.

Want to know how not close it was? He received over 45% of all player votes among the top eight MVP candidates. The second place vote-getter from players was a not-too-shabby guy you may have heard of, New York City FC’s David “El Guaje” Villa, whose player vote totals had him a distant second at a little more than 9.5%.

Those two dozen or so of us Timbers Army members who were fortunate enough to be present at the press conference/announcement at Adidas headquarters today knew that we were witness to a rare moment honoring an even rarer player and person. As supporters, we often cite “Team/Town/Timbers Army” as the three cornerstones that drive our passion. And here, in front of us, was a player who shattered team records in the regular season; who chose to wear a Timbers Army pin on his lapel during the press conference; and who then chose to spend the evening following the ceremony volunteering in the community. Team/Town/Timbers Army, indeed.

It is so much to take in at once: a breakout season in 2013 and MLS Newcomer of the Year; a devastating ACL injury at the end of the 2014 season; an amazing comeback and improbable 2015 MLS Cup run, punctuated by scoring the fastest goal in MLS Cup history only 27 seconds into the match; an historic 2017 personal best season, with an MLS-record-setting streak of 9 consecutive games with goals scored;  a total of 21 goals and 11 assists in the regular season capped by the best regular season record in the Western Conference; and a club-record 58 goals across all eras (from NASL through USL and MLS).

Combine this unparalleled on-field success with the most humble, giving person off the pitch–it can be a bit overwhelming. It’s even more unbelievable when you realize that Valeri’s move to Portland wasn’t even the team’s original plan, and that it almost didn’t happen.

It is common knowledge locally, but for those who don’t follow Portland closely, you might not realize that Valeri was actually the club’s Plan B for a playmaker in the midfield. After an abysmal 2012 that included a mid-season coach firing and a “walk of shame” banner dutifully paraded by players after the last home game of a disappointing season, the Timbers were desperate to make big changes on the field in 2013.

They were looking for a creative midfielder, somebody who could produce scoring chances for himself and for his teammates, and they thought they had found one in USMNT midfielder Mix Diskerud. Early rumors in the offseason had us signing Mix. It was so close to a done deal that, by the 13th of December or thereabouts, some of us discovered that the front office had even gone so far as to set up his player page on the team website, if one knew where to look. But within a week, the deal seemed to have evaporated, and suddenly we found ourselves scouring Argentine fan blogs in hopes of learning something more about some rumored midfielder whose nickname was basically Argentine for “Peach Fuzz.”

We’ll still never know for certain exactly why the Diskerud deal fell through. Some speculated there were issues in working with his agent/father. There were other indications that perhaps the sticking point was the curious nature of MLS, where a player technically signs with the single-entity league and not actually with the club for whom he plays. Maybe there was some other factor involved that we on the outside never discovered. Regardless, the non-deal with Mix set the stage for signing Valeri; and the rest, as they say, is history.

Those of us who are fortunate enough to live in the Portland metro area have been witness to his grace on the field, his ability to constantly think three passes ahead, his clear knowledge of where all of his teammates are and where they are likely to be next, his keen eye for that one corner of the net that will be hardest to guard in the next instant. We also know of his amazing heart, his gracious gifts of both time and memorabilia in the community.

Most of us could write 10,000 words about his generosity off the pitch and it would still fall short. The closest I can come to capturing his ethos on the field and in the world around him can be found on his wall at home, shown here with his daughter, Connie:

Work hard and be nice to people, indeed. Well done, Diego. You are our MVP. I don’t know what we did to deserve you, but we will always and forever be blessed that you came to Portland.