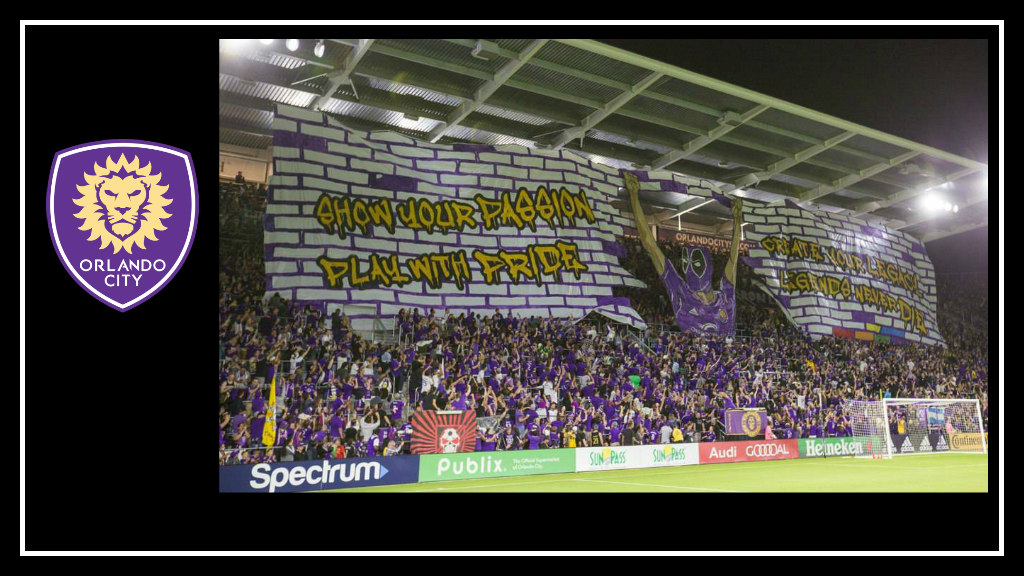 Orlando City SC’s home opener was just as intense as I would expect from this team. Saturday night we opened our season at home against DC United. Being the first game of the season, of course the fans came loaded with so much energy. The chants started in the streets of downtown Orlando two hours before the gates to the stadium even opened.

Along with the energy, the fan supporter groups hung a huge TIFO at the start of the match reading “Grow your passion, show your pride, create your legacy, legends never die” as a tribute to a fan who passed away last season.

Right out of the gate, DC found themselves in promising positions inside the box twice in just the first two minutes. At 18’ minutes, VAR awarded DC a penalty kick, which was miraculously saved by Joe Bendik and knocked out of play by captain Jonathan Spector. By the 31st minute, DC had a point in the board and by 40 minutes, Orlando was down to 10 players with Victor PC sent off with a red (initially a yellow until VAR said eh, no). By halftime, tensions were so high between the two teams a fight nearly broke out on the field.

Second half was just as intense, but at least less tension between the teams. More or less. There were still several cards handed out and free kicks awarded, including one free kick awarded to Orlando that was quickly stolen by DC and almost a dangerous breakaway if Mohammed El-Munir hadn’t chased 11 down to knock the ball out of play.

Sweet dreams City fam. Thanks for being a part of another memorable home opener! #FaceOfCity pic.twitter.com/xB8xk34LM6

And, as City is oh so good at pulling off, a pass from Spector allowed Pinho to land an equalizer in added time of his first MLS appearance. The Wall exploded. Hey, it’s not a win but it’s better than a loss. Plus we need to commend the effort here.

City held DC to just one goal with a man down for the majority of the match. Even more than that, City was without some key players from the roster, with Dwyer, Sacha, Colman, Powers and Rosell unavailable to play.

I know, personally, I had accepted the loss at about the 80th minute, thinking the cards were just stacked against us being a man down and without those players. I was gladly proven wrong when Pinho subbed in for Mueller to take some shots. We also need to applaud Mueller. This was the 2018 draft pick’s professional debut and he did awesome, getting several attempts of his own in there.

This game was tough, I will admit. This is definitely not the same DC team we’re used to facing. Controversial calls—or lack thereof, rather—made the match even more challenging for both sides. Overall, a great game by City and I’m excited to see how dangerous we are with our full roster available.

City faces off against Minnesota United next Saturday, back at the Orlando City Stadium. Check back here for my pre-game breakdown next week and I’ll try to contain my love for Adrian and Harrison Heath and Kevin Molino. Maybe.