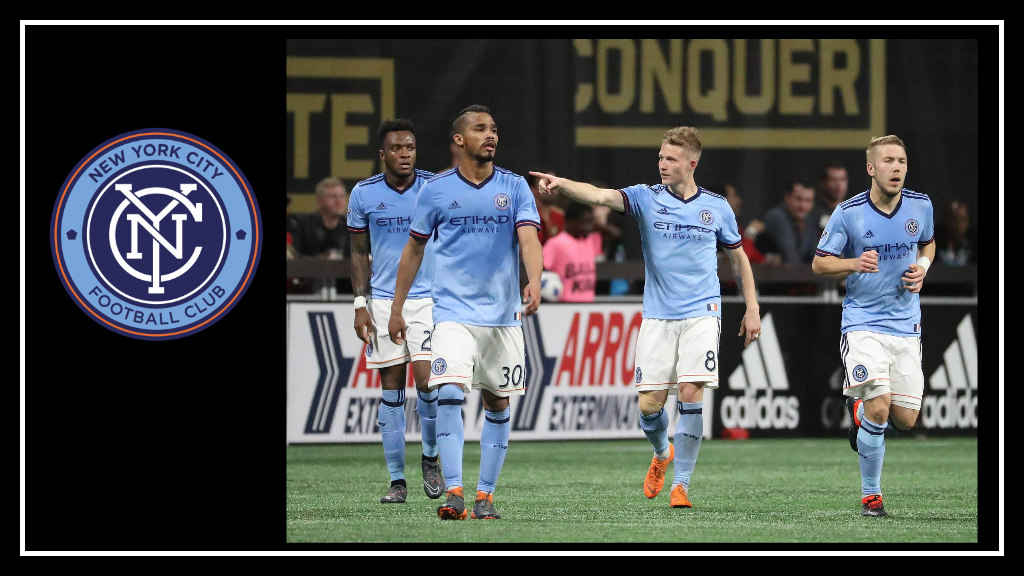 The stadium energy was palpable even by viewers watching the game on TV.  I personally couldn’t believe how loud it was.  I am late to this party but really Atlanta, you put artificial turf in your kingdom?  Come on!  Your climate is the envy of New Yorkers most of the year so I would think natural grass would work with a little extra effort.

The playing surface was the theme of the first half:  NYCFC getting used to the fake turf.  We had a tough time keeping possession and reacting promptly to Atlanta’s movement as the timing on the surface was different, to say the least.  Atlanta took charge early but NYCFC fought back hard.  Atlanta’s strategy seemed to be playing wide in the middle third and then looking to serve a long ball to temperamental silver-haired wunderkind Josef Martinez.

The artificial turf is quicker and harder on the body and experience playing on it creates a definite advantage for Atlanta, just as playing on the narrow pitch of Yankee Stadium gives us a home-field advantage.  [Side note:  Is there an artificial turf field at the new NYCFC training grounds or were they just winging it?]  However, as expected, our Boys in Blue stepped up and adapted.

Twice we were down a goal to Atlanta and twice we rose up and evened the duel with our new rival.  Captain David Villa came in much earlier than anticipated at the 35th minute, when Ismael Tajouri-Shradi went out with a pulled hamstring, and quickly evened out our 0-1 deficit via a penalty kick.  His career 399th goal.  Just let that sink in.

Even with Darlington Nagbe’s stunner late in the first half (correctly) reversed by VAR, Atlanta still pulled ahead again in the second half 2-1 with a goal by Chris McCann. City kept their cool and built possession and momentum.  In the 73rd minute, Villa held off three Atlanta defenders and eventually found Alexander Ring, who did not throw away his shot and sent a rocket to the top left corner of the goal.  The King and the Ring were back and taking names.

With the game level, it could have gone either way and each remaining moment was a battle.  Walking away from the foreign turf with a point felt a lot like a win.  Like walking away from a duel with both parties still alive.  Win-win.

Other big winners were the NYCFC supporters who traveled to the South. According to Third Rail Supporters Club member Riggs Ac, it was a “thunderous game” with “southern hospitality”.  Liza John, another Third Railer said there was “…so much energy in the stadium and NYCFC fans made their presence known, from the march to the stadium through to the march out.  It was really great to experience the match with so many other soccer fans.”  Isn’t that what it’s all about?