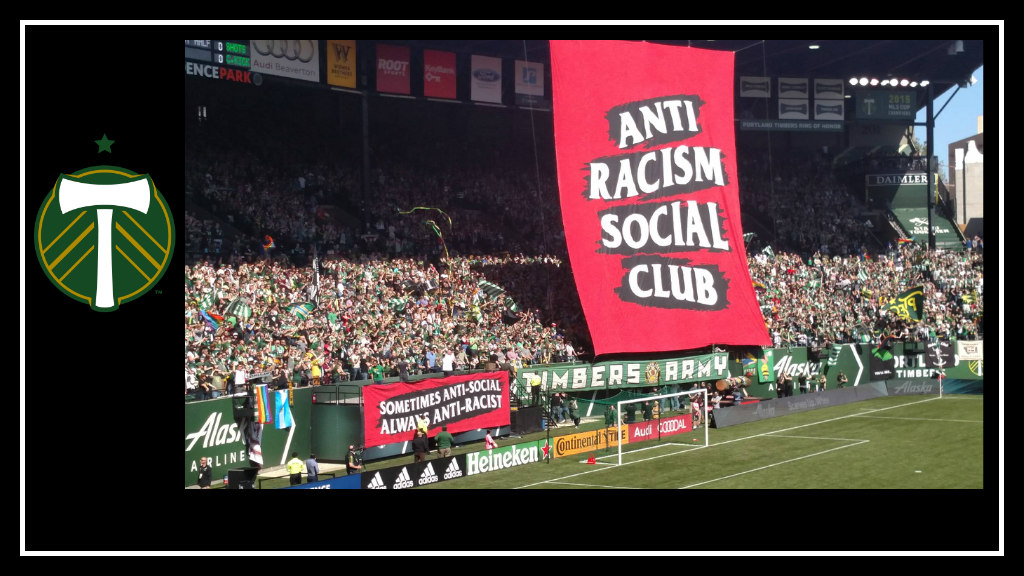 After five performances on the road that ranged from embarrassing to inconsistent (to say the least), and after two thirds of a good game at home that was just enough to allow us to cling to a win, the Portland Timbers finally put in a rock-solid performance for a full 90 minutes this Sunday, handing first-place New York City FC their first defeat of the regular season and earning three points in a decisive 3-0 victory at Providence Park on 4/22.
Recap

I will admit, when I saw the starting lineup, I was more than a little intrigued. Jeff Attinella got the start at keeper, which I appreciated. After a stint in the doghouse, Liam Ridgewell was back in the lineup next to Larrys Mabiala in front of the goal, with Alvas Powell and Zarek Valentin filling out the rest of the back line. So far so good.

Then, there was the rest of the lineup. Andres Flores got the nod over Andy Polo. The rest of the starters were unchanged from the week before; but holy cow, was the formation different. Diego Valeri up top with Fanendo Adi? And what was everybody else doing? I’m no expert, but MAN the guys were sitting deep. On paper, it might have been 4-4-1-1 but in practice, it looked more like a 6-2-1-1 or even an 8-0-1-1 at times. It was a fascinating look at what we had always been told that coach Gio Savarese would do: change lineups and formations in response to changing opponents.

In this case, Gio adapted the team’s approach to the opposition, to incredible effect.

You know those “possession with purpose” conversations we used to have with Caleb Porter? This was “give the other team possession, but with purpose.” NYCFC had 75% of the possession, but to what end? Our back 4 (or 6 or even 8 at times) gave NYCFC plenty of opportunities to touch the ball…up to a point.

But as our opponents approached the final third, they were, time and again, forced wide and given little opportunities to punch holes in a solid, well organized back line, that held a clean sheet against the top team in the league. And with Blanco, Valeri, Diego Chara, and Cristhian Paredes ready to pounce on any mistakes, dispossessing NYCFC and setting up the counterattack, it was a recipe for success.

When we did have the ball, we made it count. Sebastian Blanco turned in his usual 110%. He berated himself after the game for having not one but two near misses, but those largely existed in the first place because he worked to make them possible. And then, of course, there was this beauty:

It is always thrilling to see a tiny player score on a well-timed header. (Fun fact, I often refer to Blanco as ArgenTiny.) And the arc of that perfectly played ball was a thing of beauty.

The second goal again came from a counterattack, as first Blanco and then Chara worked to steal the ball and transition quickly. Blanco, Chara, and Valeri made short work of the NYCFC back line. After Sean Johnson was unable to handle Valeri’s strike, Adi was there for the tap-in, and suddenly we were up 2-0:

And finally, of course, Larrys Mabiala got to open his account for us, with this lovely header off a corner kick, which put the final score on the board. End result: Timbers 3-0 NYCFC.

Alvas Powell showed maturity. I know last year I often said “That’s So Alvas” in frustration, because, while Powell has always shown tremendous potential, it has nearly always been accompanied by a downside. Powell has frequently made brilliant defensive plays, followed immediately by silly fouls and/or laughably bad giveaways, sometimes within seconds of each other.

This game looked different. Besides that beautiful assist to Blanco, there was one moment in particular, late in the game, that comes to mind. Powell had the ball in the corner, running down the clock, where he held it…held it…held it…and then kicked it off the opposing player for a throw-in.

It was perfectly executed. His rookie year he would have held off the other player beautifully, then immediately thrown an elbow for a costly card or made a terrible giveaway pass. Nice work, Alvas. Here’s hoping we see more of this version of Powell on the pitch this season.

Christhian Paredes is a gem. Hard to believe he is only 19 years old. Last week, he assisted in two of our three goals. This week, you know how many times he lost a tackle? Zero. I love his work so far, and I hope he has a long and happy future with the club.

Ridgewell put in a solid performance. While I don’t particularly care for golf, and I am not in the market for board shorts, I really don’t much care about what Ridgewell posts on social media. All I care about is what he contributes to the team, both on and off the pitch.

Liam Ridgewell was a solid defender this game. He was a field general, constantly talking to the rest of the back line and mids. That back line looked extremely well organized for the full 90. I don’t know what the private conversations between coach and player are, and frankly, I don’t care. Given Ridgewell’s and Mabiala’s ages, I am far more worried about having a consistent, healthy center back pairing going forward.

Speaking of healthy, I assume that the only reason Ridgewell got the start was the knee sprain Bill Tuiloma was carrying this weekend. Here’s hoping our older center backs can stay healthy and focused, no matter which pairing is in the starting lineup.

More Samuel Armenteros, please. Yes, Adi had a decent turn. I STILL want to see Armenteros more. Would have been nice to see him around 65′ or 70′ for Adi. He looked hungry and capable during the preseason.

Well done; but it was only one game. The whole “Gio changes the lineup and strategy for each match” thing we were sold on with the new coach? This game looked pretty, pretty, pretty good. But let’s see how it goes on the road. In particular, let’s see how we close out games away from home.

Once again, the Timbers Army killed it in the tifo department. As part of the UN’s International Day for the Elimination of Racial Discrimination, many supporter groups with membership in the Independent Supporters Council have carried out anti-racism displays. Since our home opener was the prior weekend, this was our first chance to demonstrate our support for ending racial discrimination, and the Timbers Army did not disappoint:

Well, that was fun! Next week we have a bye, followed by another away match, this time against the San Jose Earthquakes. on 5/5. Let’s see if we can manage to take this successful show on the road for a change. In the meantime, rest up, boys, and get ready. The next home game is 5/13 v. the Seattle Sounders. Until then, I’ll see you online!