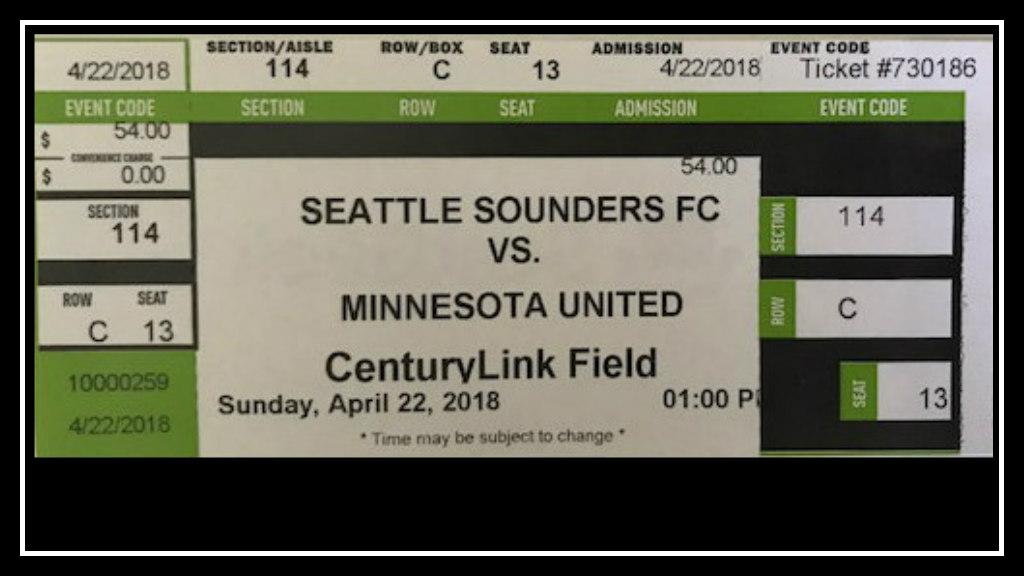 First and foremost, I am an LA Galaxy fan. But, it’s no secret that I have a crush on Jordan Morris, so I got these tickets for Seattle Sounders vs Minnesota United back in early February when he wasn’t injured. I planned my trip to visit my friends who actually live in Puyallup right now.

My plan was to visit them and enjoy a city that represented the best of what Washington state has to offer, the only exception was the weather. After the game, we got oysters and wine, and went to Pike Place for clam chowder. It was a day to behold in downtown Seattle where it’s common to see people adorned in sports gear since the Seattle Mariners stadium is right there. Of course, the most common attire is the Seattle Seahawks, but the soccer culture there is one of the best in the league.

CenturyLink is huge and I’m spoiled by StubHub Center where there’s not a bad seat in the house and I’m used to general admission where I can arrive early and be close to the players. So, I wanted to sit right by the tunnel.

Being the soccer ambassador I am, I brought my friend Megan to her second MLS game ever. Her husband, who follows soccer since he’s from Jamaica, and their daughter also came along with us this time for their first game. I didn’t see JMO, but it was an exciting event and a game the Sounders needed to win since they were on the verge of the worst start in league history.

Watching their three-year old’s reaction had to be one of our favorite parts of the match. She was clapping and really seemed stunned by the number of people. We took turns holding her and picking her up so she could see over the fans who never sat down. I was definitely overwhelmed by the energy and capacity of the soccer fans.

During halftime, I went over to meet with fellow MLSFemale Official Reporter for the Sounders, Jennifer Denton, which as she put it, was finally nice to put a face to the name.

I’ll be back up in Seattle in the Los Angeles Galaxy section in August.

As the Official Galaxy Reporter, my editors said I could do a collaboration with Megan for this match and I’ll let her take it from here:

The typically rainy and gray city of Seattle shared its spring splendor of sunshine and crisp salt air this past Sunday, April 22nd, boasting blossoms from dogwood and magnolia trees along with the roar of sports fans in the distance. The Sounders did not disappoint either. They brought sunshine to the CenturyLink stadium winning 3-1 against Minnesota United. Doing so in style as they flaunted their Earth Day recycled uniforms.

The thrill of the stadium doesn’t just stop at the aroma of garlic fries and the booming of fireworks. Fans are the driving force, chanting and singing from their seats while waving fan gear and flags. You feel as if Chief Seattle and his tribe are there in spirit.

The players rush out to the field as youngsters line the guardrail in hopes of getting an autograph. In good company, surrounded by family and friends, I can say I feel like a real MLS fan, especially with this view 3 rows from the action.

The few clouds in the sky start to part and the warmth of the sun starts to fill the stadium. Sloshing $9 beers in the stands as the Sounders bring in their first goal, delivered by midfielder Gustav Svensson. His teammate Will Bruin follows closely behind scoring back to back within minutes. It feels good to have your home team step up to the net, shoot, and score, there is no better way to feel the energy of almost 40,000 fans.

With the ball making its way from player to player, the intensity builds as Christian Ramirez scores one for Minnesota United. It was a solid effort and good fight from both teams the entire 90 minutes. It was the last 5 minutes that put the Sounders over the top with Jordy Delem scoring in the final moments of the match.

The sound of trumpets and drums filled the air as fans flooded out of the arena in good spirits, an outstanding first win of the season.