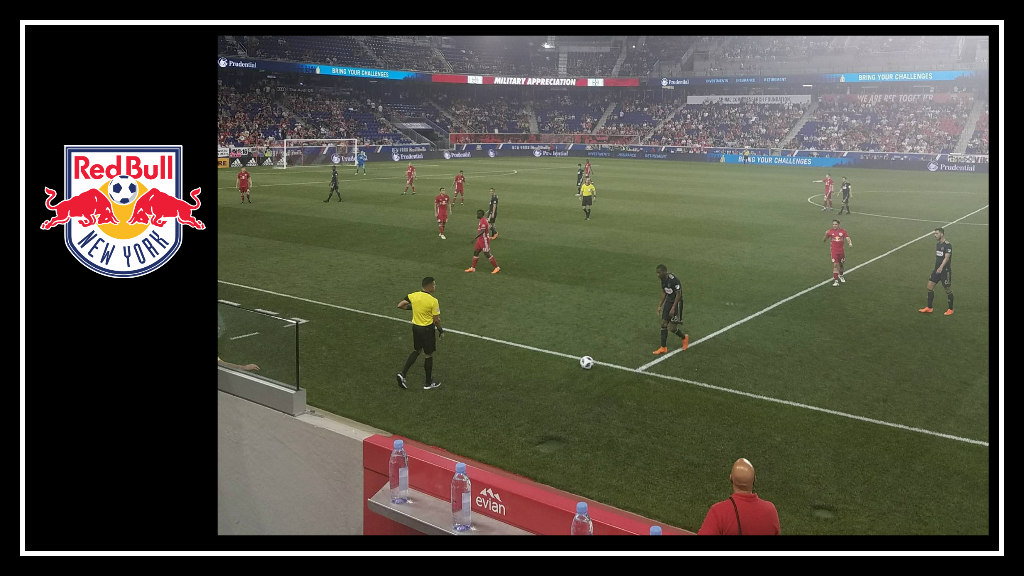 The New York Red Bulls were able to flip the script and win both road matches (I’ll write on those separately… I’ve been remiss) and were looking to keep the streak going back home. Alas, it was not meant to be. Fellow eastern conference side Philadelphia Union held the team to a scoreless tie, their first draw of the season.

GONNA FLY NOW: Just before the game, goalkeeper Luis Robles was honored not only for his “Ironman” streak of 183 consecutive MLS games played but also for his work with Tackle Kids Cancer. As happens before every home game, a childhood cancer patient was recognized and cheered by fans. And the streak is memorialized in Red Bull Arena. Robles begins training again this week, but there is no set timetable for his return.

PHILLY FORGET ME NOT: Red Bull fans have an interesting name for the time leading up to matchups with the Union: Philly Indifference Week. The New York/Philly sport rivalry is common, but… is one-sided in this case. “I think they look at us as a big rival,” said striker Bradley Wright-Phillips after the game. “[T]hey want to beat us and it’s a big deal to beat us.”

But as I have said before: The natural enemy of RBNY is DC United. Regional stuff is fine, and giving into it can be fun. Keep it lighthearted, and it’s even better.

Why in the world did the Sons of Ben bring a banner that says NY ❤ Nickelback? This isn't Canada. #RBNY pic.twitter.com/c3emIAm8qx

IT’S NINETY DEGREES: Okay, 87. But if you’re reading this, you likely live on the east coast, where this past winter lasted 2 years or something. It’s been cold for so long, no one knew what to do with themselves.

Coach Jesse Marsch admitted the game was affected by the temperature: “we’re going to have to acclimatize to the heat… and then use more guys at different times.”

Compounded with the Open Cup starting up again, as well as Michael Amir Murillo and Fidel Escobar going to Russia, team depth is going to be tested. Getting Carlos Rivas back with the first team as well as others (Ben Mines is old enough to vote now) should help with that.

NOT TOO HARD, NOT TOO SOFT: I’ve been looking at my recent articles (this one included), and it’s almost like I skip the actual game part. Well… it’s kind of warranted here. A scoreless draw by definition means not much really happened.

The team that trounced Portland and NYCFC couldn’t make much happen against Philly. There were a couple of breakaways by Wright-Phillips and Florian Valot, but Union centerbacks Auston Trusty and Mark McKenzie were able to squeeze them to the point where they couldn’t get the shot. (Both of them are 19 years old. Hmm, it’s almost as if MLS games should be played by young men…)

A call on Kemar Lawrence for a handball in the box (52′) resulted in a kick from the spot for the Union. The most tense moment of the match quickly became a non-issue when CJ Sapong shot the ball wide right. This is especially fortunate, as GK Ryan Meara dove the opposite direction of the shot. After the game, Meara shared his relief: “sometimes things
have a way of working themselves out.”

Also of note was Tim Parker‘s massive defense at the goal in the 18th minute. Epps was charging at Meara, who came off his line to stop the attacker. The ball sailed over Meara, but was deflected by Parker right at the goal. It was “make your momma proud” stuff.

Does your team ask you out for a date on Saturday night?
If not, get a better team. 😍 @NewYorkRedBulls https://t.co/74btRANyyX