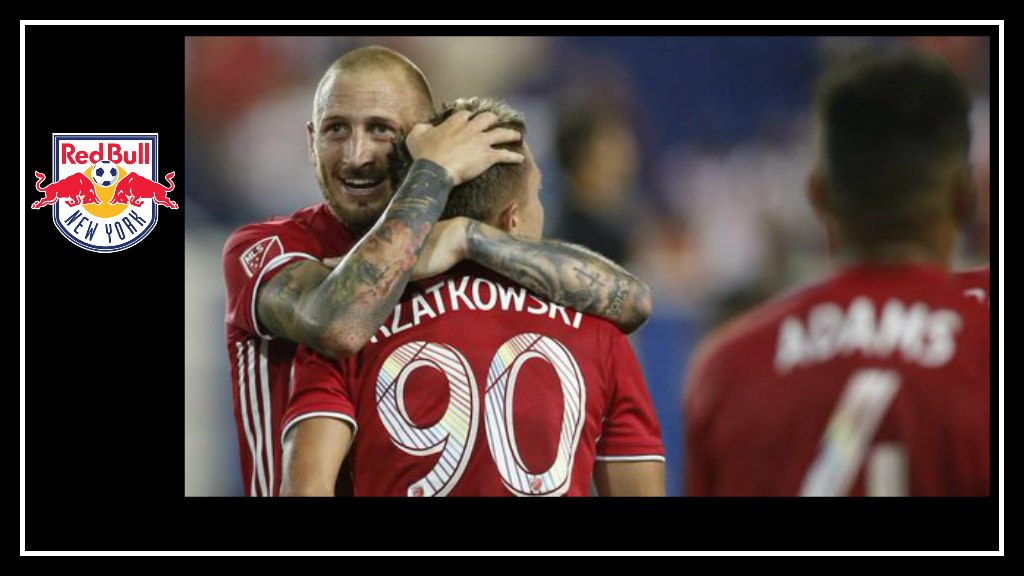 THE REAL VIKING ARMY: I had promised the members of the Red Bulls Supporter Group the Viking Army that I would stop by and crash their tailgate at some point. So I made my way to the back end of the vacant warehouse on the gentrification chopping block to where their tailgate party is held.

I snapped some pictures and learned some stories.  They talked about jerseys of players traded and gone. They spoke of the moment they fell in love with the team and the passion of a supporter’s group that stands and sings for ninety minutes plus. They shared the sense of family that makes their gatherings on and between game days so special.

LOVE WINS: Does anyone know why the Red Bulls’ Pride Night is in July? Just kidding– I don’t care. They do it right. The rainbow lasers are straight fire. The scarves and running sleeves they gave away are great. And it’s never a bad time to remind everyone that anyone can play.  There was a discussion panel about supporting all athletes prior to the game, and in a time where it is still difficult for people to be themselves, we do need the reminder.

EVENLY MATCHED: Of course Bradley Wright-Phillips scores the opening goal (5′). He’ll hit 100 goals as a Red Bull very soon. But he was called offside. (Drink every time you read ‘Enter VAR’ in my article… or better yet, don’t.) The Red Bulls’ signature High Press tactic often catches an attacker offside, but that wasn’t actually the case here, and the Video Assistant Referee corrected the call. “Goals after VAR, it’s annoying, you don’t get to celebrate,” BWP lamented after the game.

And celebrate, the team could not. Johnny Russell (8′) leveled the match and both sides held each other at bay the rest of the first half. Then Roger Espinoza practically started off the second half getting SKC the lead (51′). Something had to change for the Red Bulls to not let history repeat.

RBNY IS FOR THE CHILDREN: Battling back from injury and fighting for minutes, RB Salzburg exchange student Marc Rzatkowski was subbed in for “Kaku” Romero-Gamarra in the 60th minute. Fans, knowing what Kaku is capable of, were surprised by the move from newly promoted head coach Chris Armas. After the match, Armas explained:

“Marc, he had a great week of training. In every session, he brought energy… Going into the game we thought that he would be a guy we’d rely on in some capacity.”

And boy, did he seize the day! He tallied a brace that leveled and then put RBNY ahead (72′ & 79′). He was named man of the match, and took home the game ball. And yet…

I was part of the huddle of reporters who went to RZA (so nicknamed by fans as a reference to a member of NY hip-hop group Wu Tang Clan) in the locker room after the game. Usually, Rzatkowski ducks out of the locker room as soon as he’s changed while we speak with captain Luis Robles or BWP. He had turned towards his locker to get something and looked genuinely shocked when he turned back around and saw us all there. A real team player, he shared credit with Tyler Adams and Sean Davis, the midfielders who assisted his goals.

(If you don’t catch the reference in the heading, click here)

So: same time, same place, same chance for revenge when the New England Revolution come to Harrison and face RBNY for the second time this season.