Loons win and lose all in one night 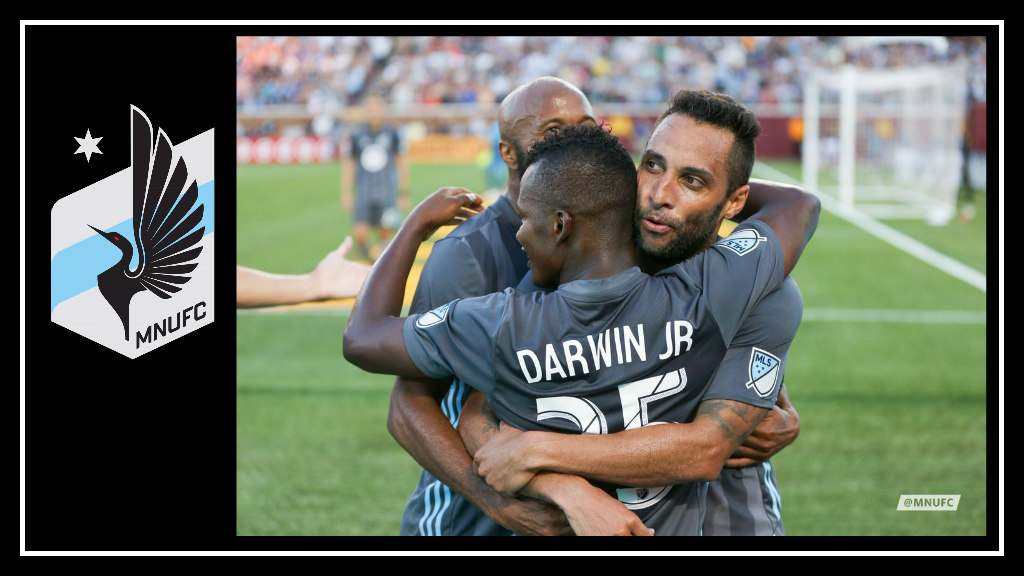 Just days after a 2-1 ‘friendly’ loss to Costa Rican club Saprissa, Minnesota United FC took the field again on yet another hot evening in Minneapolis. Fans who have seen more than their fair share of temperature fluctuations over the years flocked to TCF Bank Stadium in the hopes of being cooled off by a solid Loons performance… But hopefully not a cold one. They wanted to sing Wonderwall again after facing the team that gave them their first chance to sing last season: Real Salt Lake.

The first half was a mixed bag for Minnesota. The back three, especially Brent Kallman, made some big clearances and the attacking trio of Chris Ramirez, Darwin Quintero and Miguel Ibarra provided plenty of sparks. Unfortunately, no one could get into position in the final third to finish the job. The Loons’ best chances came from Ibarra’s speedy runs and Quintero’s newly unlocked long-range shots. Too bad they were up against Nick Rimando this week. Oh, wait…

Too bad Rimando was up against Darwin Quintero this week.

Minute 52: Quintero finds space, turns with the ball on a tight angle near the right post, opts to cross it in front of Rimando where the inside of Ibson’s right boot is waiting. Goal.

Minute 62: Quintero receives a beautiful ball from Calvo and turns to fire it from long range between the heads of two defenders and over Rimando. Yes, over. Another long chip from the Scientist finds the upper left corner. Goal.

Minute 68: Ibarra, on the run, one on one with Rimando. Rimando goes to the ground. Ibarra passes him and slots the ball into the net. Goal.

There is a reason I highlight the timing…

I’m going home. Let me know how this finished. #MINvRSL

Jeff Rueter, of The Athletic, led the press box into the Twilight Zone.

Then, it nearly all came crashing down when Plata scored for RSL in the 77th minute (a set piece, go figure) and 85th minute. A nearly sterling defensive performance broke down, allowing two goals inside of ten minutes.

And just as three points were nearly tossed away, so were most of the words I had written before heading downstairs to coach Heath’s presser and then on to the locker room.

After Heath stormed away mid-interview with on-field reporter Jamie Watson; after he sent the players’ kids out of the locker room and gave his team a dressing down which could be heard through the concrete walls (“Nothing I can really repeat,” said defender Michael Boxall); after he settled down just enough to sit in front of the media, Heath was asked to describe the takeaway: “Three points. Did our best to throw it away. Tried to throw away 75 minutes of good work by people deciding that they know best. They’ll do what they want rather than doing what we know is right.”

What does he want from his players moving forward? ” For them to understand that they don’t know everything. And do what’s asked of them. And they’ll be okay. There are too many people in and around this football club that have an opinion on it.”

Neither Boxall nor Miguel Ibarra (who was once again one of the strongest Loons this night) could shine any light on that last statement from their coach. But both spoke of the mental lapses and lack of focus in the dying minutes of both this match and the win against Toronto FC last week. Ibarra added, “I think we’re fine. I mean, we as a team talked about it right after [Heath talked]. He’s right, we gotta do better at closing out games, but we got three points which is the most important thing.”

A win is a win is a… Well, sure, couldn’t it always be better?