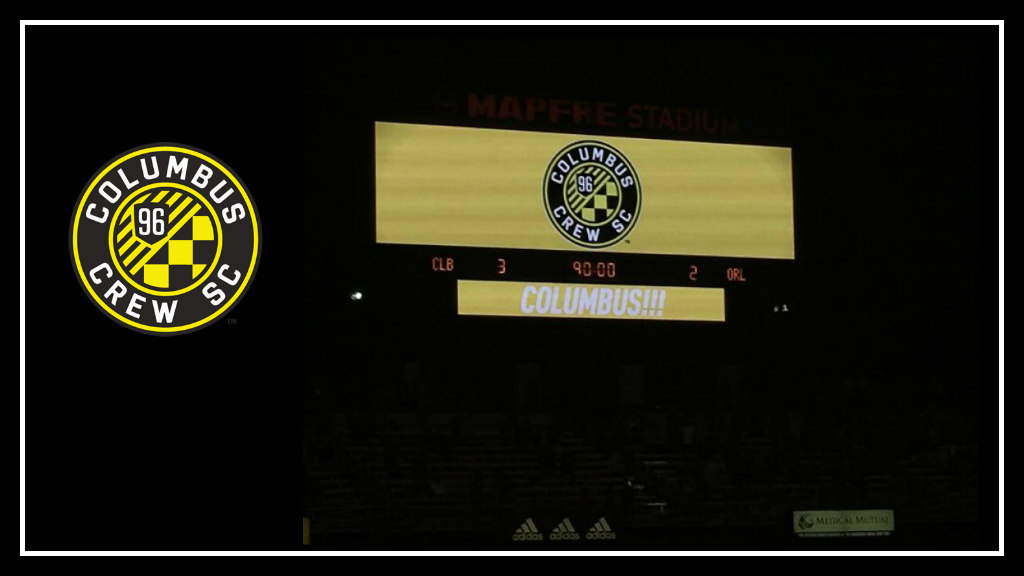 During a rain-delayed Saturday night, Columbus Crew SC took on Orlando City SC resulting in a very emotional night due to a Homegrown Hero.

The game’s scoring began with Sacha Kljestan in the 16’ who essentially was unmarked on the back post.

Then, in the middle of the first half, Crew SC took one of its 17 corner kicks of the night.  Jonathan Mensah tried to bicycle the ball into the net but instead kicked an Orlando City SC defender.  This resulted in the first brawl of the night with players on both sides shoving and trying to hold each other back.

The first half ended with Orlando up 1-0.

The second half started with Crew SC putting a goal in the net in the 51’.  Harrison Afful sent the ball down the sideline to Niko Hansen who put a lot of work into chasing the ball down to the end line and sending it across to Gyasi Zardes who put the ball into the bottom corner of the net.

Orlando did not wait long and scored again in the 58’.  Mensah got beat by the attacking Yoshimar Yotun who sent it to Kljestan who then flicked it across to Stefano Pinho who slotted it into the net.  There was a lot of argument from Crew SC on this goal as they felt Zardes was significantly fouled with the ball at the start of the play, so the play should not have progressed to the scoring sequence that it became.  Regardless of that perspective, Orlando was up 2-1 on Crew SC.

Officiating karma was going to swing back Crew SC’s way in the 86’ when Afful sent a cross into the box and Patrick Mullins, making his Crew SC debut after being picked up from DC United, was knocked down in the box while jumping for a header.  Just as Crew SC had an issue with Orlando’s second goal, Orlando was not happy with the call on the field.

Gyasi Zardes took the PK, and while the keeper went the correct way, the PK was just too well struck to be stopped.  Crew SC had tied the game in the 88’, and Zardes had scored his thirteenth goal of the season.

The game looked as it would end in a tie until an unlikely hero would prove my prediction incorrect.  Homegrown captain Wil Trapp got a pass from Mike Grella and after two touches rocketed the ball from about 37 yards out into the top right corner of the net giving the team the lead and a pile of Crew SC players tackling Wil on the field.  It was a beautiful shot and up for MLS Goal of the Week.

The energy did not sizzle out then, but it did shortly after a second small fight broke out near the end of the game when Orlando players were trying to hurry up a Crew SC player who was down on the field.  But eventually, the ref’s final whistle blew, and Columbus Crew SC defeated Orlando City SC 3-2.

At some point during the game, Josh Williams left one of the 17 corner kicks with a torn jersey right in the middle of the chest.  To say this game got chippy and physical might be an understatement.

With Berhalter at the helm, Crew SC typically rolls out a lineup of a 4-2-3-1 and an occasional 3-5-1-2 thrown in for some variety.  When Patrick Mullins entered the match in the 68’ for Luis Argudo, we saw about as close to a 4-4-2 as we have ever seen under Berhalter.  This gives the team another tool in its belt to use depending on the team they are playing.

Justin Meram who had been part of Crew SC since his rookie year was traded to Orlando City SC during the offseason partly due to his request to further his development somewhere else.  Meram’s had trouble finding his rhythm in Orlando and did not make the trip to Columbus this past weekend.

Soon after the game, rumblings started that Meram had requested a trade back to Columbus.  The lack of wingers contributing to goals this season has been a problem for Crew SC, and I for one would love to see Meram come back to Columbus. I think not only does it help the team and Meram, but it will also help Pedro Santos who has struggled to find his groove this season.  With another winger like Meram for opponents to focus their attention on, Santos may be able to find firmer footing on the pitch.