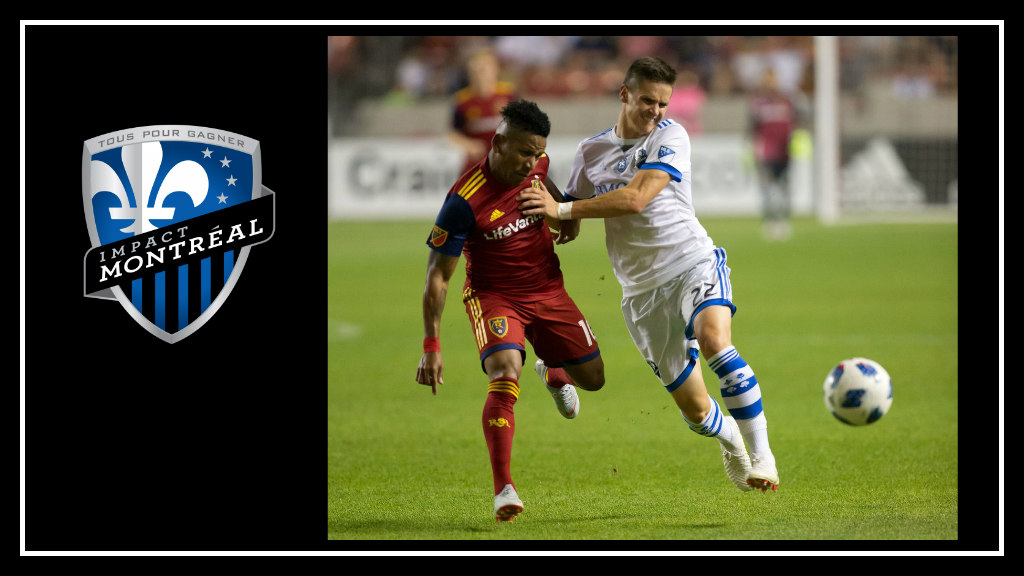 The grueling month of July finally came to an end for the Montréal Impact, and unfortunately, it had ended on an extremely negative note with:
– Elimination at the semi-final stage of the Canadian Championship.
– French striker Jimmy Briand pulling out of his agreement to join the team at the last minute.
– A 2-1 home loss to Atlanta United.

The team then began the month of August with a should-have-won match against DC United, which ended in a 1-1 draw. However, there is no time to wallow in these disappointments, as the final ten-game stretch begins with Montréal still in playoff contention.

Although the team is finally back to a regular weekly game schedule, they were on the road once again to face their final remaining Western Conference opponent, Real Salt Lake. After a lackluster performance against Wayne Rooney and company, fans were skeptical that the Impact would leave Utah with any kind of result, especially when taking into account the formidable 9-2-1 home record RSL boasted leading up to the match.

Many accredit RSL’s record, at least in part, to the fact that Rio Tinto Stadium is located at high elevation relative to most other stadia. But the Impact would have to breathe deeply and bear with the circumstances, as most of their Eastern Conference opponents hold games in hand.

When teams rarely face each other, as is the case in cross-conference matches, it is difficult to envision how a match will play out. Throw in poor air quality due to nearby forest fires, a blistering hot evening, and the altitude, and there is no denying that the Impact were up against it. However, they began the match on a positive note, creating several attacking chances that were squandered by Matteo Mancosu and Ignacio Piatti. The case of Mancosu is of particular interest, as it becomes clearer with each passing week that his time is up and he has no confidence left in front of goal, but Rémi Garde simply had no other fit striker to play in his preferred 4-3-3 lineup.

The Impact were made to pay for their lack of decisiveness in front of Nick Rimando’s goal as Ken Krolicki’s clumsy footwork following an RSL counter led to Joao Plata slotting a penalty past Evan Bush. Momentum tipped toward the home team following the penalty, and Impact fans felt they were in for a long night.

Yet Garde must have pulled out a spectacular half-time talk, as the Impact returned to the pitch as a more cohesive unit in the second half. Following a corner, which surely was something taken from the training ground, fullback Jukka Raitala channeled his inner Benjamin Pavard to rocket an outside-the-box shot past Rimando, marking his first goal in Bleu-Blanc-Noir.

Following the goal, two new signings made their Impact débuts. Quincy Amarikwa and Micheal Azira were two pickups in a flurry of last-minute deals made by the Impact on Deadline Day. Amarikwa brought Mancosu’s painful night to an end, and showed a positive spark, with a hunger and a confidence that has long been absent from Mancosu’s game. Azira relieved Krolicki and showed a deftness in his passing, and a calmness that can only come through many years of MLS experience.

Neither goalkeeper was given much reprieve in the second half, as both Rimando and Bush made several excellent saves to keep the scoreline even until the final whistle. Although the teams below them are breathing down the Impact’s neck, it never hurts to take a point on the road in hostile territory. As the Impact will face exclusively Eastern Conference teams for the remainder of the season, those games are virtually all “must-win” matches.

Next up: Chicago Fire are in town, in terrible form. However, the last time they came to Montréal in such poor form, in 2016, the Impact were humiliated with a 3-0 home loss. So while this game is indeed a must-win, it certainly shouldn’t be taken lightly.