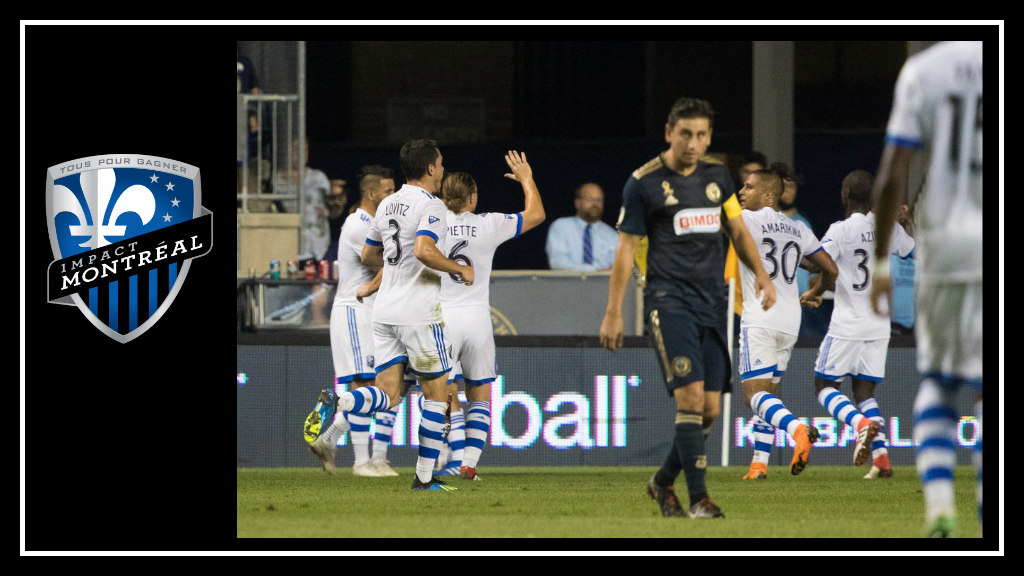 It’s that time of year. The race to the playoffs is in full swing, and it’s getting tighter with each passing match. Montréal Impact had firmly ensconced themselves into the sixth and final Eastern Conference playoff spot after a truly complete home win against first-placed (at the time) New York Red Bulls. It was now time to take the road to face the fifth-placed Philadelphia Union in one of the many six-point matches left of the season. Travels had not been kind to Montréal this year, as they had collected a mere 8 points on the road going into the City of Brotherly Love.

Rémi Garde led with what many believe to be the strongest starting eleven presented this season. There was only one change from the 3-0 win over the Red Bulls, with Rudy Camacho returning to central defense as Jukka Raitala took the bench. Quincy Amarikwa’s physicality and dynamism, two qualities which had been sorely missing up front, was rewarded with another start for the league veteran.

After a tepid start, the Impact were caught sleeping on a corner, as defender Austin Trusty got the jump on his marker and scored his first career goal. Following the goal, it seemed as though the Impact had deflated, much as had been the case every time they had trailed in the scoreline this season. Indeed, Montréal had only collected one point after going behind in the scoring. As the Union enjoyed extended periods of possession, it appeared as though the Impact were going to let three crucial points slip through their fingers.

However, fans of the Bleu-Blanc-Noir would be pleasantly surprised. Following a turnover in possession, Ignacio Piatti and Alejandro Silva led a swift counterattack. So many times Silva had created a fabulous chance that was saved or missed the target, yet this time he kept his composure against onrushing keeper Andre Blake and his low shot ran into Philly’s net. Shortly before halftime, Saphir Taïder chased a rebound off Blake’s save, and poked it home to seize the lead.

Things would only get better in the second half. As the Union found it increasingly difficult to penetrate Montréal’s defense, Amarikwa’s tireless efforts were compensated with his first goal as an Impact player as he bundled home a cross from Daniel Lovitz. To put the cherry on the sundae, Silva and Piatti capped the night with yet another blistering counterattack from the top of Montréal’s 18-yard box, and Silva chipped Blake to notch his second goal of the night.

It was a classic Montréal Impact win, with a tight defense and a clinical counter allowing the Impact to depart Philadelphia with the comfort of knowing they will end the weekend in sixth place, and that the North Star Bell > the Liberty Bell.

Additionally, results elsewhere in the Eastern Conference have favoured the Impact, with the pursuing DC United and New England Revolution only picking up draws in their respective games. As the Impact keep their eyes fixed on the next match versus NYCFC, fans and pundits are bound to continue to keep one very interested eye on the standings.