Minnesota, the team to beat 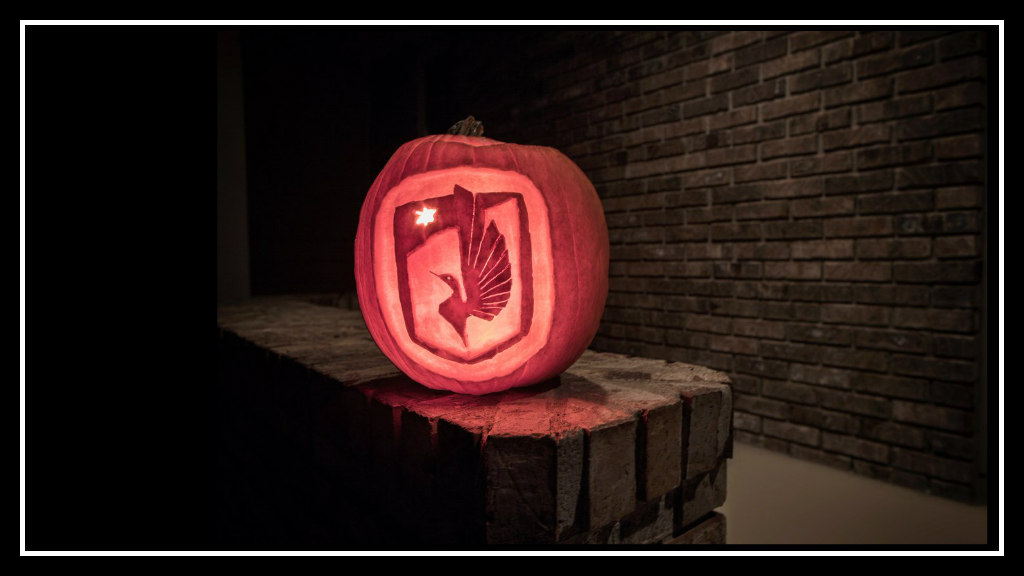 How did we get here? To the lowest of the low? The team that makes the worst look good?

From a club that won more than it lost, that entertained its fans no matter the scoreline; that was able to draw moral victories from nearly every loss; that brought the heart and soul of its lineup along to the big leagues. To a club that could only win at home; that saw its fans turn off their TVs and walk out of the stadium; that lost its temper in the ugliest way possible; that jettisoned its heart for some coupons and didn’t give its soul nearly as many opportunities as he deserved.

On September 29, I spent a chilly evening losing my voice in the Supporters Section of TCF Bank Stadium for the last time. Minnesota United FC still had two home games left to play after that night, but that match against NYCFC would be my last of the year to enjoy from the stands and was probably my last time seeing soccer at TCF. After a horrid road trip, United could have flopped that night. But the home turf magic took hold once again and the Loons soared to a 2-0 victory on goals from Angelo Rodriguez. And with stout defense from  Brent Kallman:

Singing Wonderwall with my friends was a great end to my year, but the season was far from over. United still had playoff hopes: a win on the road in Philadelphia could help them eek closer to that bold cutoff line.

They did not win. The Loons I watched on the 29th did not make an appearance in Philly on October 6. And I did something that I never imagined I would do during a MNUFC broadcast.

Twenty minutes into the match, I was still troubleshooting how to connect my tablet to the smart screen in our hotel room so my friend and I could enjoy it on the big screen. We were about to give up when Minnesota conceded a third(!) goal in the 23rd(!) minute. Rather than turn off the TV and watch on the tablet, we muted my livestream and watched an episode of Kitchen Nightmares from 2007 and turned off the tablet altogether with ten minutes to play after Minnesota conceded a fifth goal. 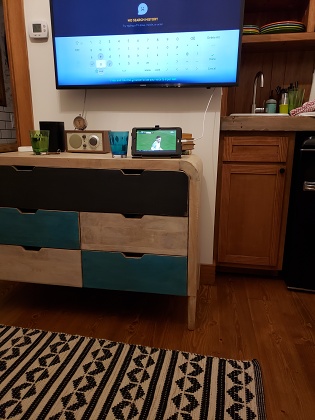 We chose a 10-year-old reality show over a Loons game and any regrets about that decision evaporated upon opening the post-match press release: 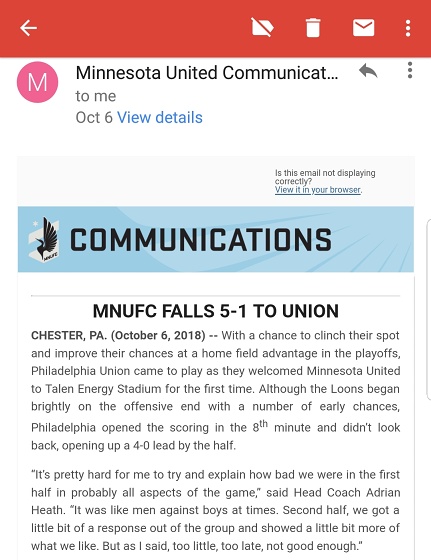 The Loons’ playoff hopes evaporated along with my regrets. Surely, their return home would be better, especially given the opponent, a Colorado squad on a seven-game losing streak. Neither club with a chance at the postseason, both looking for a moral victory on which to coast through the final weeks of 2018.

Narrator: Nope. No moral victories were had on October 13. But the Loons continued their streak of making bad teams look good.

A few weeks ago, I had the opportunity to interview MN Kicks defender Alan Merrick about the growth of soccer culture in Minnesota. We talked about the winning tradition of his NASL Kicks and all the signs of growth around Minnesota’s soccer communities:

“We have a great soccer culture. We perhaps need to make it so it’s a little bit more, uh, into a winning mode [laughs], but that takes some time to develop…”

There were plenty of lows in his playing days (the Kicks folded along with many other NASL clubs and attempts at revival were short-lived), but the highs are legendary. Many of the positives we’ve seen from MNUFC are reminiscent of those from the Kicks.

I would like to think that in forty years I will stand outside the offices of a growing Twin Cities-based soccer club with a recorder in hand as I question Miguel Ibarra about his legendary days of playing for MN United FC in the MLS. With any luck, this past Saturday’s bench-clearing melee in the waning minutes against the Rapids will be a distant memory, a fleck of embarrassment overshadowed by the success of the club’s much-touted ‘Three Year Plan,’ a well-developed winning tradition and a backbone of players who came up with the club and shared in its successes before moving on.

Until then, all we have is a bitter loss in which two goals were given up much too easily, so easily that the Dark Clouds became lethargic in their support, a handful even leaving the stadium long before the whistle. Those were the lucky few who didn’t have to witness their favorite player shove an opponent who made the poor decision to taunt the home fans with his goal celebration and the coach’s son to spring up from the bench to grab the throat of another celebrant.

Until this match, our club had had its share of embarrassing moments, but we could make light of most of them, such as this lovely moment that garnered international laughs.

Until we made the joke our own:

But even the NASL Loons’ production department would not be able to salvage the club’s dignity from this moment:

There was no honor in that fight. No moral victories can possibly come from that night.

This weekend, MNUFC will honor the legends with #50ktoMidway, livening up the final match in their adoptive home with an attempt to break an attendance record set forty years ago by the MN Kicks.

I can only hope that forty years from now, when I interview Ibarra, we will not be talking about a club that folded decades ago after failing to maintain a foothold in a league that talked bigger than it acted; a club that was being celebrated for one or two moral victories, but also held as an example of how not to run an expansion club.

Instead, I hope that we will talk about how the Loons honored those legends and 50,000 fans with an epic rendition of Wonderwall; the fight all but forgotten; the club’s clear strides to get better with each match, with each passing season; and the community honoring the key players who saw that struggle through to a title.

I would like to leave you with a response to that fight in the tradition of #BlameItOntheJelly, but I’ve already said that such a thing will never exist.

All I have to offer you is this cover of ‘Wonderwall.’