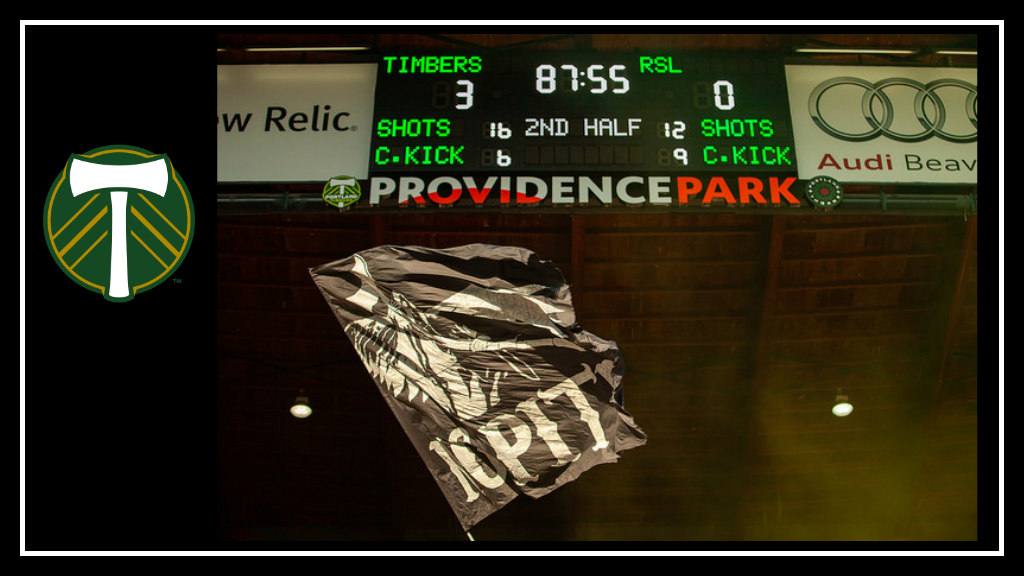 While the Portland Timbers beat Real Salt Lake 4-1 back on October 6th, thanks to a brace from Sebastián Blanco and scores from Jeremy Ebobisse and Lucas Melano (!), this game was far from a foregone conclusion. RSL had just come off a decisive 4-1 victory of their own against the New England Revolution, and that was while missing several of their key players.

And as Timbers fans know, we have had a history of big showdowns against RSL with some less than satisfactory results (see, for example, the US Open Cup Semifinal or the Western Conference Finals series in 2013). RSL has had ample opportunity to demonstrate their ability to come through in big moments against the Timbers in the past, and this past Sunday they had every motivation to do it again: a win for RSL would guarantee them a playoff spot.

Fortunately for Timbers supporters, though, Sunday was all Portland, as the Timbers kept a clean sheet through ninety minutes, scoring three of their own and securing their spot in the postseason.
Match Recap

The Timbers started off strong, with captain Diego Valeri having a chance at a goal the first minute of the match. Larrys Mabiala opened the scoring, beating Marcelo Silva off a Valeri set play in the 15th minute:

Kyle Beckerman seemed to show his age (I’ll confess, my match recap notes say “JFC, Beckerman looks old, like almost Bob Dylan old but with a teeny, tiny rattail”), but he managed to get a foul called against Diego Chara early on as the two tangled. Chara had his revenge in the 68th minute, leaving Beckerman completely in the dust:

I just can’t stop watching this footrace between Chara and Beckerman. The angle doesn’t do Beckerman any favors, but still: Mercy me. #RCTID pic.twitter.com/5xq9TWOgB2

The game was pretty much already in the bag when Blanco put in the third goal at the 87th minute:

Sebastian Blanco just loves scoring against #RSL. Another great counterattack by #PTFC to make it 3-0, and even Lucas Melano made a positive contribution with a nice assist.#PORvRSL #RCTID #MLS pic.twitter.com/sqEtCRXU6j

3-0 was the score when the final whistle sounded, guaranteeing the Timbers a spot in the playoffs and ending Real Salt Lake’s season.
Quick Takes

Who’s our starting striker? This is a question that gets a different answer depending on when you’re asking. At the beginning of the year, it was clearly the now-departed Fanendo Adi, who, since his loan to the club in May 2014, had scored 54 goals for the Timbers and was one of the best strikers in club history. Nevertheless, gradually his star power with the club seemed to have faded in favor of newcomer Samuel Armenteros, and by July Adi was traded to USL side FC Cincinnati for allocation money.

Fast forward to fall, and the position now seems to be Jeremy Ebobisse’s to lose. In his last two starts, Ebobisse has had a goal and a couple of key assists, both in Blanco’s goal in the 73rd minute in Rio Tinto and in Chara’s goal on Sunday. For my money, Ebobisse is a smart player who plays well with our South American players, in particular frequently connecting and combining well with Valeri, Blanco, and Chara.

We first had the opportunity to see this potential in action against the Vancouver Whitecaps last year, when our decimated squad had so many injuries and call-ups that we brought up players signed to three day MLS contracts just to fill out the squad and we couldn’t even field a full 18. In his first MLS start for that match in July 2017, he notched a goal and an assist and worked extremely well with Valeri up front and in the middle. For my money, he’s earned the right to the spot.

Who’s in the starting lineup in Vancouver? It will be interesting to see who coach Gio Savarese decides to put in the XI on Sunday. On one hand, it is clear that the center back pairing of Liam Ridgewell and Mabiala has been the most effective this season. At the same time, Ridgewell has not been to nearly as many away games as he has home games this season, and it is possible to envision a scenario where Ridgewell is home, rested and ready for the play-in game which will take place sometime midweek.

There are few scenarios this weekend that have the Timbers finishing above 5th place, meaning that the play-in game is almost certainly going to be an away one; and given that the play-in is a one-game-only scenario (win or you’re done for the year), it is conceivable that the Timbers might rest some players in preparation for playoffs.

Does Armenteros get a run out this Sunday, saving Ebobisse for the postseason?

On the other hand, there is the possibility that the Timbers climb to fourth place in the standings. Let’s be honest, it is pretty unlikely. In addition to a Timbers victory, either Seattle Sounders would have to lose at home to the hapless San Jose Earthquakes or FC Dallas would have to drop their final game against the 11th place Colorado Rapids; but it is at least possible.

This might argue in favor of bringing out all of the starters, in hopes of the improbable fourth-place finish happening and the Timbers getting the chance to host that midweek play-in game. (Yes, technically there is the possibility of a third-place finish for the Timbers in the standings, but since it involves making up a ten point goal difference, among other things, let’s not bother with that scenario.)

Hey, how about that Steve Clark guy, huh? I know, folks were mercilessly, if good-naturedly, ribbing the Timbers’ recent acquisition, keeper Steve Clark online, because he was the guy on the wrong end of this historic play from the 2015 MLS Cup:

When he first joined, there were tons of posts online about “See if Dairon Asprilla will give up his jersey number 27″ or “Maybe we can get him to sign the 27-second ball in the fanladen, ha ha.” Well, Clark has embraced the team and the town, is genuinely happy to be here, works hard, and sometimes has saves like this:

While Jeff Attinella recovers from that separated shoulder, we have a more than capable backup on our hands who bailed us out more than once this match. Hats off, Steve. That was a world class save, point blank and somehow directed OVER the net and safely away. Glad you’re with us.
Off the pitch

Congratulations, Chucky. We’re lucky we have you. Please stay away from pots of boiling water during the postseason.

Team, Town, Timbers Army Thanks to a very generous donation from a Timbers Army and 107 Independent Supporters Trust (107IST) member, we were able to invite a total of sixty local youth and family members to attend the regular season home closer, some of them for the first time ever. Most of the youth soccer players were past recipients of the generosity of 107IST members. Some, like Portland Public’s own Roosevelt High School soccer team, received uniforms, thanks to member dollars and revenue from merchandise designed and created by supporters to raise funds for 107IST work:

Others received scholarships to play in local soccer, for everything from rec league to regionally competitive teams and affiliates of the Timbers and Thorns, thanks to the generous work of the 107IST charitable organization, the Gisele Currier Scholarship Fund (GCSF):

Diego plays for the Saints Soccer Academy in Portland. He wears number 8, just like his hero, @DiegoDv8. Generous donors to @107ist and the Gisele Currier Scholarship Fund have supported Saints Soccer players, allowing them to play rec soccer in PDX. #RCTID pic.twitter.com/uv5gmkzEvQ

It felt great to have a home game after such a long break, but I certainly hope it isn’t our last one for the year. Let’s see where we stand after next weekend. Next stop: Vancouver away. See you there!