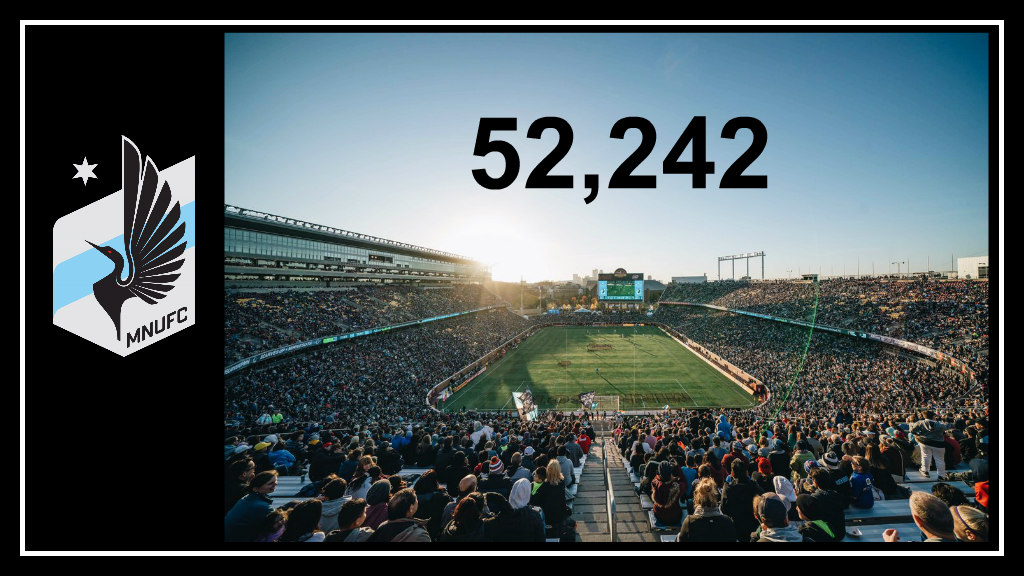 I do not want to write this. Another loss in front of a lot of fans, another round of #HeathOut chanted instead of ‘Wonderwall,’ another night of bitterness and frustration.

But I do want to write about how real, live Minnesotans do indeed want to watch live soccer, for better or for worse; about how the Supporters could not be silenced, even after Zlatan Ibrahimovic left his mark; about the strides the club must make to erase the bitterness of these past two seasons; and about the fact that despite my frustration, when the fireworks gave way to a different kind of light show, I experienced the goosebumps usually reserved for ‘Wonderwall.’

Last weekend, Minnesota United FC set a new state record for attendance at a professional soccer game. 52,242 fans watched the Loons close out their residency at TCF Bank Stadium making the club’s #50ktoMidway promotion a huge success. The downside, however, was that there were 30,000 more fans present to witness the second consecutive home loss. L.A. Galaxy’s Ibrahimovic argued that they were all there to cheer for him and his squad and by evenings’ end a few United fans probably wished that’s why they had come.

Ibra kicked off what would become a 3-1 rout of the Loons, with a goal in the 30th minute which swung the momentum in Galaxy’s favor after a number of good opportunities for Loons came to naught. Three L.A. goals went unanswered until the 53rd minute when Angelo Rodriguez – who had scored in the first half only to be called offside – finally got his head on a long cross from fellow DP Darwin Quintero and sent it past Bingham into the net.

But that would be all for the Loons. Adrian Heath spoke positively about Rodriguez’s prospects, but seemed to blame the rest of the squad for his ineffectiveness: “I thought the big man [Rodriguez] led the line really, really well again… We’ve got to start to work out how to use him better and once we do, when we start to play off him, I think there’s a lot of promise in the attacking half.”

That response is too little, too late for me. He echoed what supporters said of the DP’s first appearances. That was quite some time ago and Rodriguez himself seems to know it. When asked about the fan support that night, he said, “That’s why I tell you that personally, I feel ashamed. We always try to do well during the week to give [the fans] joy on the weekend. Sometimes it works, sometimes it doesn’t, but truthfully I’m amazed [by their support].”

The squad’s poor performance was overshadowed by the MNUFC digital team’s response to Ibra’s talk in the lead-up about how the ticket sales reflected Minnesota’s love for him rather than support for the Loons. The Bank erupted in cheers and laughter when an error message appeared on the video board in place of Ibra’s head shot as lineups were announced:

The forward nearly had the last laugh though when he sailed a free kick in the 65th minute over the crossbar and into the capo stand, connecting with a Dark Clouds capo.

. @Ibra_official missed the goal entirely, but he found his mark. Watch that capo closely 😂😂😂 pic.twitter.com/TVUeqrM6HL

But, true to form, Nach Karnik and the Dark Clouds turned that moment into a badge of honor: 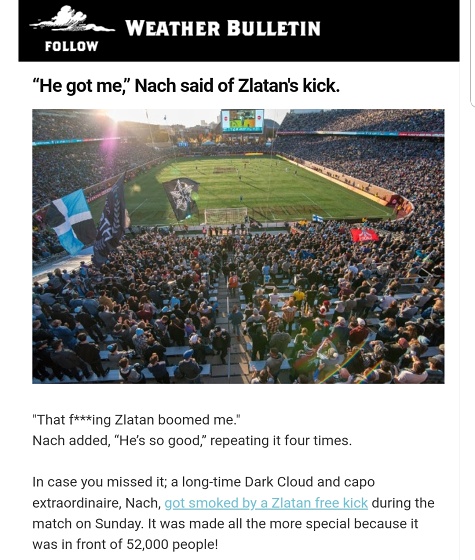 Minnesota’s Supporters have learned to find joy in every moment. It’s a necessary coping technique in a season full of bitter losses, questionable decisions and poor performances. If MNUFC wants to fill Allianz Field, they need to do more than talk about improvements and tout the ubiquitous ‘Three Year Plan.’ According to Heath, playing at Allianz “will be nice. I think most people think it’s going to be good. I don’t think they realize how good it’s going to be. This is going to be a game changer for this club moving forward… but we’ve got a lot of work to do before we open up the stadium.”

That’s for sure. Heath and his staff will need to put those words into action, and quickly, to ensure that the emotions evoked by Allianz are matched by the club’s performance.

My anger and high blood pressure quickly dissolved into goosebumps and tears of joy as I watched a live stream on my phone of the Fan Appreciation Night fireworks. The Supporters present at TCF were able to watch a special presentation on the video board while the fireworks burst above them, but my stream showed only the pyrotechnic display, then faded to black. Then another light show began.

That stadium is ours. Our colors. Our club. Our home. But before we can enjoy our home, our boys must face another team celebrating a triumphant return. If Columbus Crew‘s Decision Day opponent was not MNUFC, I would be cheering for the black and yellow as they celebrate the success of #SaveTheCrew and vie for a playoff berth. But they will play the Loons, a club with no chance at the postseason, but with every opportunity to make a statement.

If the Loons lose, they must do so while gutting it out to the final whistle. Sunday is their last chance to prove to both their supporters and their detractors that they want to be here, that they are worthy of support and of their place in the league.

The Loons must win.