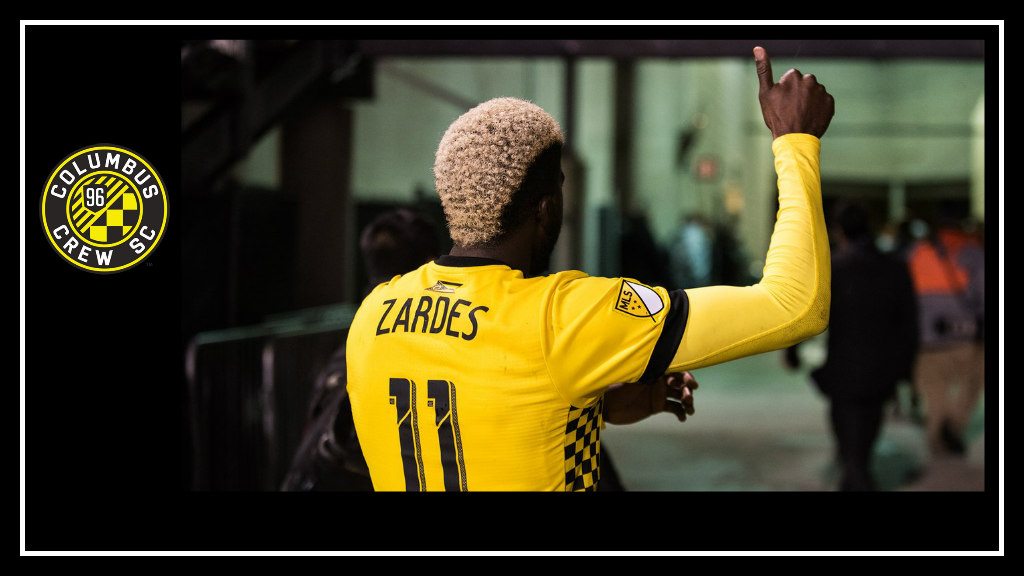 The game was about as shaky and unpredictable as the Ohio weather.  Columbus Crew SC took on the Minnesota United FC in the final game of the season in Columbus.

Before the game, the sun shone down and prepared the teams and fans for a game that determined the Crew’s playoff possibilities. However, nine minutes in, Ohio weather being Ohio weather, decided to change tactics.  Lightning and rain caused a delay–foiling the MLS’ plan that all games end at the same time leaving every teams’ playoff fate unknown until the final minute of all those synchronized games.  Well, as MLS has learned this year, Columbus rarely does it the way they want us to.

After about an hour delay, the game resumed in the blustering wind, rain, and a significant temperature drop.  Crew SC jumped back into the match quickly with a short corner from Federico Higuain to Milton Valenzuela.  Valenzuela sent in a cross, which Gyasi Zardes headed into the goal in the 11’ of the game.

In the 41’, a scary scene emerged, as Columbus Crew’s Gaston Sauro in an effort to stop a streaking Angelo Rodriguez, collided with keeper Zack Steffen leaving both Rodriguez and Steffen on the ground for several minutes with Rodriguez being subbed out.  Steffen returned to the match with a collective sigh of relief leaving all Crew fans.

The first half ended with Crew SC up 1-0 and a playoff spot clinched as the Montreal Impact lost to the New England Revolution.   Despite the guaranteed playoff spot, it was important for Crew SC to get the win as they have struggled to get results as of late and need to get into form if they want to go deep into the playoffs and make a run for the MLS Cup.

Gyasi Zardes scored quickly again in the second half slotting a ball in the 49’ after following up a free kick from Higuain that bounced off of Minnesota goalkeeper Matt Lampson, but Minnesota had no desire to make this easy for the Crew.  Francisco Calvo, a Minnesota defender scored in the 68’ unmarked off a free kick, and again in the 77’, as a ball skipped between Harrison Afful’s legs right to Calvo.  Minnesota had evened up the score.

However, Zardes decided that it was time to score his first career hat trick and scored the final goal of the night in the 83’ off a beautiful ball from Niko Hansen putting the Crew SC in fifth place.

He was just too much to handle on #DecisionDay! 3️⃣ goals in #CLBvMIN for @gyasinho earns No. 1️⃣1️⃣ his second @alcatelmobileus @MLS Player of the Week award of 2018! 🎥 pic.twitter.com/KyUfdiKNAM

I haven’t written a lot of articles this season about Crew SC.  First, I can’t watch away games at home due to some bizarre blackout rule that I have yet to figure out.  Second, my personal life outside of soccer has been a bit more crazy than normal.  And third, this was an emotionally hard season.  Due to the possibility of the Crew’s move to Austin, every game felt more emotionally draining than normal.  It was difficult to want to relive that in recaps and articles.

However, it looks likely, due to a local ownership group that includes the Edwards and Haslam families, that Crew SC may remain in Columbus with Austin getting its own team.  Now until the final i’s are dotted and t’s are crossed, I will not feel completely calm, but it helped me enjoy this game a lot more.

Zardes scored his first professional hat trick in this game and ended the regular season with 19 goals.  I have a lot of respect for Sigi Schmid, but I’m not sure what he was thinking trying to play Gyasi at leftback last season when Zardes was with the Galaxy.  Gregg Berhalter has a proven system that helps make his forwards successful goal scorers.

As this was the last regular season home game, it always makes me pause and wonder who we are possibly watching for the last time as a Crew SC player.  Will Steffen and Wil Trapp head to Europe?  Will Berhalter be named the new USMNT head coach?  The answers to these questions, for now, remain unknown but I am very thankful that these men have played a part in Columbus Crew SC history.

Typically, Crew SC is on a hot streak going into the playoffs.   This season, we have not seen this streak.  In fact, it’s been pretty much the opposite.  If Crew SC can’t find their top-level form and make the mistakes they made against Minnesota, their playoff run will be short-lived.