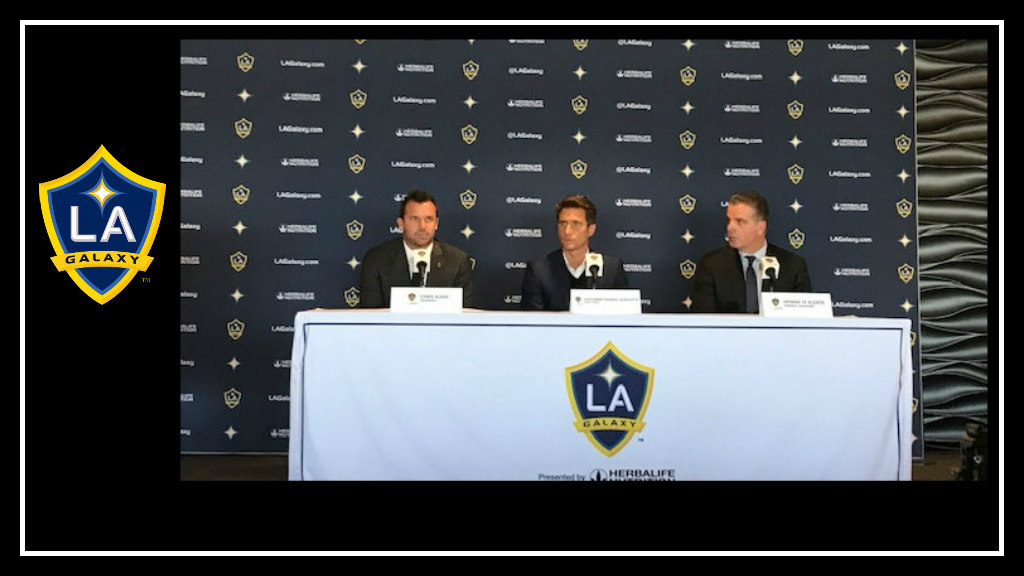 The press conference for Guillermo Barros Schelotto began with kind words about late former head coach Sigi Schmid. The impact he had on soccer in the United States was prevalent, especially after his passing, as many in the industry shared stories about him.

LA Galaxy president, Chris Klein, mentioned how Schmid influenced the sport and the club. Schelotto then added how important Schmid was to him and thanked him for also bringing him to play for the Columbus Crew.

The LA Galaxy have looked good on paper. Schelotto is no exception. He has many honors and championships with Argentina and in MLS despite being only 45 years old. His experience makes him worthy of the position as head coach.

He’s dealt with much higher profile players and teams and he’s developed younger players, as well. As a player with the Columbus Crew, the team won the MLS Cup in 2008. The Boca Juniors final was wild. It had been postponed due to a bus attack by fans. That aside, it was Boca’s decision to let him go according to GBS.

The focus is on moving forward, having patience, and doing the work needed to start winning. I was able to ask general manager Dennis te Kloese a couple of questions:

DTK: There’s a lot of things that will take a little bit of time. There are [some things] on the roster that need to be figured out, as we saw, and I don’t want to be judgemental because I don’t want to look back. I want to look forward, but there has been an imbalance defensively–with Guillermo coming in, with the experience that he has, in the coming weeks, with an intensive search for some players–that is one of the first priorities that we’re looking at because offensively the team showed a lot of promise last year and will show this year also.

MH: You mentioned wanting to have players ready for the opening of the season.  You believe you’ll have all the pieces that you need defensively by the start of the season before the summer window?

DTK: The construction of the roster in MLS with the rules that are given, that takes a little bit of time. We’ll never put any excuses behind anything here. We’ll just work hard.  We already started, and we’ll do our very very best to be top-class from day one. But it could be that certain pieces could fit in over the summer or a little bit later.

It was only the 3rd of January, but I felt management should already be talking to players for their positions on the roster and also figuring out who they want to have leadership on the pitch. No one wants to look back at the 2018 season, so it’s best to look at this as a fresh start. That said, I go into the 2019 season with cautious optimism.

There are more questions than answers at this point, and the motto for this year seems to be “we’ll see.” I was looking for a sense of urgency in the management to get things together NOW.  Opportunities can present themselves as late as the summer window or after, but fans expect to see results come opening day. Of course, patience is key and options shouldn’t be limited, but this Los Angeles team has a reputation to uphold as kings of MLS and that reputation has been compromised.

There have been many rumors including overseas interest in the Lion and other players. It’s speculated that, due to finances and MLS regulations regarding designated players and international positions, some players will have to be moved. Juninho and Chris Pontius have been welcomed back, but the Galaxy’s midfield is crowded.  The back line is what needs significant improvement, yet they re-signed Servando Carrasco. Schelotto’s style is an offensive one but the Galaxy need to work on defense which he assured they would work on.

In terms of forwards, there doesn’t seem to be a spot for Ola Kamara with Zlatan Ibrahimovic, who is now confirmed to be staying with the club. Scoring goals wasn’t the Galaxy’s issue last season: it was allowing goals, which is a defensive issue. It’s speculated Kamara could also be traded for his spot. Romain Alessandrini is also a possible option. Gio Dos Santos would be a more favorable move. It hasn’t been announced who will captain the team either.

MLS has released the regular season schedule and it’s much shorter, which means it’s more important than ever for the team to build a roster with depth.

The preseason schedule is as follows:

The home opener is set for March 2nd against the Chicago Fire at 5pm PST.