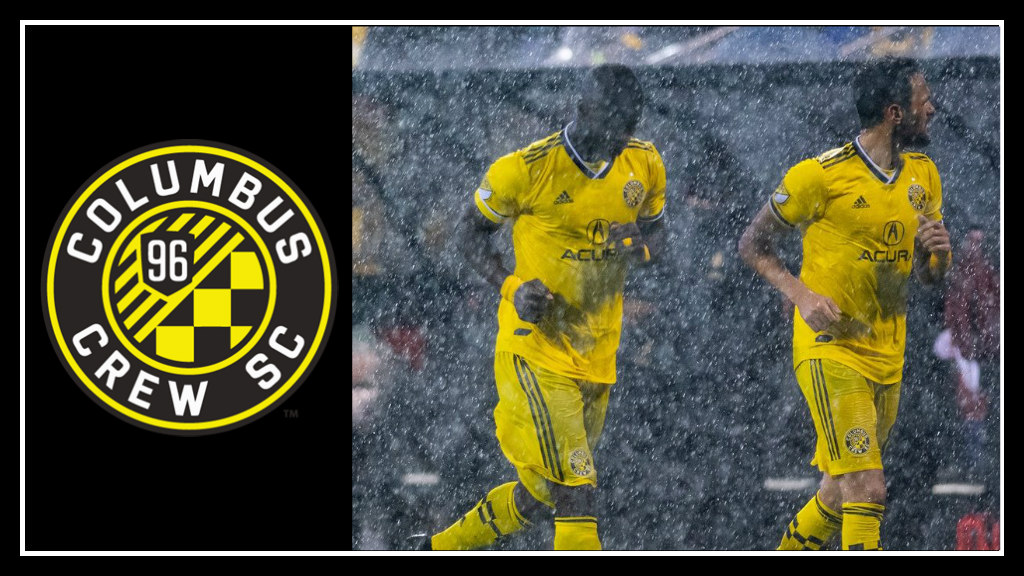 The answer is yes, kind of. It was part soccer match—part playing on a Slip and Slide. The Columbus Crew took on the defending MLS Cup Champs Atlanta United this past Saturday, March 30th. The game took place during a rainstorm that even the pristine pitch at Mapfre Stadium couldn’t drain fast enough.

The Crew came out and scored in the 2’ of play. When Artur received a ball from Wil Trapp, he carried down the sideline and crossed it about 9 yards from the end line.

Gyasi Zardes tried to slide into the ball along with an Atlanta defender to put it into the goal. He missed it, but made it to the backside of the goal where Pedro Santos was making an unmarked run and to put the ball into the back of the net.

In the 24’, Atlanta almost evened up the score. Julian Gressel headed a beautiful ball from Ambrose that Zack Steffen was able to stop. It bounced off Zack and Josef Martinez tried to finish the bouncing ball that was quickly cleared by Jonathan Mensah.

Then, the game went into a weather delay due to lightning in the area. After the almost hour weather delay, the game resumed with the rain still pouring down.

In the 34’, Zack Steffen proved why he deserved Man of the Match honors. Atlanta was dangerous again with a ball that squirted through from Franco Escobar to the approaching Ezequiel Barco. Zack made an incredible diving save keeping the Crew’s lead safe.

In the 39’, the Crew picked up their second goal with great runs by Robinho and Zardes. Zardes was making a break for the 6-yard box, stopped, and stepped back a few steps losing his defenders. Robinho, who had received a great ball from Federico Higuain, had run down the sideline and sent a perfect cross to Gyasi who buried it.

In the 57’, Zardes earned a PK that Federico Higuain took. Brad Guzan made a good save on the PK.

At this point, the game was really being played in a swamp. Atlanta had some chances as did the Crew, but the game held at 2-0.

Thoughts About the Game:

In this game, I joked on Twitter that the field had the best first touch of any player out there because wherever the ball landed it would just stop.

I truly believe that Mapfre Stadium has one of the best pitches in the MLS. (It is not artificial turf, and the Columbus Grounds Crew is the best! I’m sure I’m biased, but I don’t care.)

However, there is no way that any pitch could hold up against the amount of rain that poured down during the course of this game. The puddles and amount of water on the pitch just stopped the ball dead.

There wasn’t any way to dribble the ball. In fact, many players who tried ended up tripping over the ball when it dead stopped in the water.

In many ways, it was a hilarious game to watch because, at many points in the game, it looked as if the players were on a Slip and Slide. However, I was very concerned that players on either team would get hurt. Definitely a game for the books.

Also, Robinho was dangerous and has definitely set the bar high in order for Justin Meram to win back his starting spot. Robinho had several great crosses and shots during the game. I’m excited to see what he can do.

Federico Higuain is a great player. However, he cannot make consistent PKs on the south goal Mapfre Stadium. While I know he would like to get that monkey off his back, he just needs to stop taking PKs on that end of the stadium.

I will say it again, and I will say it every game until he is gone. But, we don’t win this game without Zack Steffen. I wish we had brokered a deal where we could have him back on loan. He is such a great keeper, and I feel privileged to have seen him play.

I joked with MLS Female writer @robynsaghini that we should have negotiated in Zack’s contract that we get him back for playoffs if we play against Atlanta.

This week, the Crew remain at home at a (hopefully) much drier Mapfre Stadium to take on the New England Revolution on April 6th.