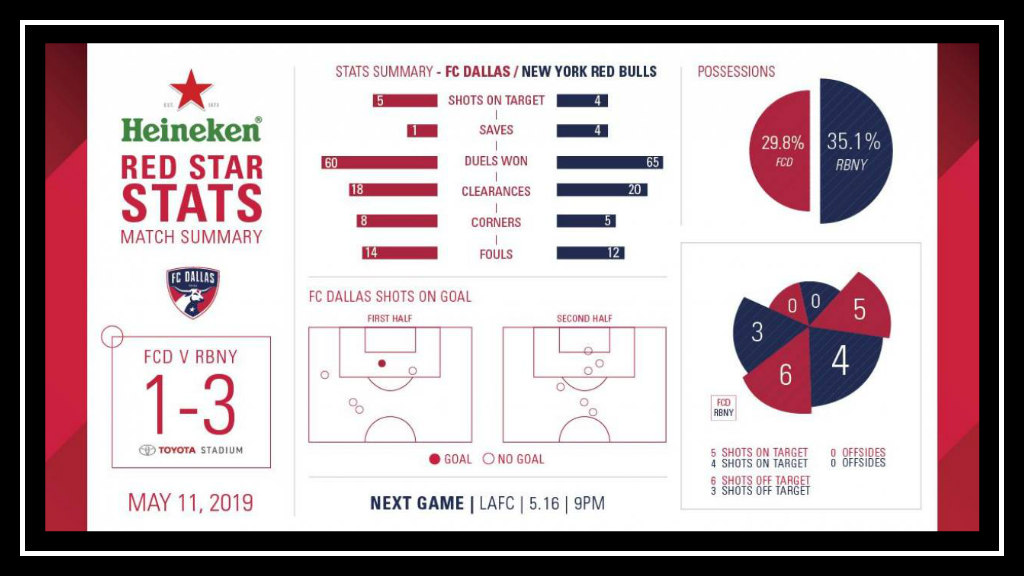 With FC Dallas back at home, I was ready to get back to Toyota Stadium and witness another win for the team. Since I’ve only began following this team for the 2019 season, and FC Dallas had been undefeated at home, I hadn’t seen Dallas lose in person, and I didn’t expect that to change.

Clearly, I was incorrect…

With an upsetting 3-1 loss to the New York Red Bulls, Dallas takes their first loss at home. However, FC Dallas’ game is a work in progress, and we’re going to go in depth with play analysis, statistics, and what’s to come for the next game against Los Angeles FC.

To begin the game, FC Dallas had an interesting lineup for their team. With a 4-3-3, Dallas replaced Carlos Gruezo with Jacori Hayes in the midfield, and this replacement was actually pretty well prepared. However, Ryan Hollingshead replaced Michael Barrios as a right wing, and this showed many issues for FC Dallas.

Within 12 minutes of the game, New York scores a goal by Cristian Casseres Jr. Some issues in the front in midfield led to this goal, as Jacori Hayes assisted defense with Reggie Cannon to cover Andreas Ivan from NYRB. Unfortunately, Ivan passes to Casseres and gets the first goal of the game, leading New York 1-0.

Starting back up after halftime, New York scores by the 58th minute. With Reto Ziegler’s late attempt to close down New York’s Michael Murillo, the ball gets shot and goes in with the help of Sean Nealis, allowing the Red Bulls to lead 2-1. And, to end the game, New York scores again as Matt Hedges is unable to hold the ball before New York comes and takes it back. As Bryan Acosta and Thomas Roberts (subbed for Jacori Hayes) help out Reto Ziegler with a failed attempt to get the ball back. New York scores the final goal by Brian White, making the ending score 3-1.

Some noticeably crucial findings as I viewed this game was the lack of eagerness within FC Dallas. Perhaps, with New York changing 10 out of their original starting 11, Dallas assumed they would have an easy win. The most hungry I saw the team was when Zdenek Ondrasek subbed in for Ryan Hollingshead. ‘The Cobra’ came out with an intense attitude, and with 16 touches and 2 shots (one on goal) within 26 minutes, this is probably the best we’ve seen him play, and his outcomes solely reflect his eager attitude in the game.

Overall, seeing Ryan  Hollingshead up top as a wing was a very disappointing position for him. With the idea for Hollingshead to drop back, the temporary right wing was shut down almost every single time by his defender, Kyle Duncan. As well as missing a shot on goal, Hollingshead provided little to no support for Dallas in this game.

One more thing to point out was Thomas Robert’s play as he was brought in. As I personally viewed his performance from the Dallas Beer Guardians supporter section, I could see intentionally physical play from Roberts, and not in the professional way. With several remarks to players, as well as pushing and throwing elbows, it’s clear that the 18 year old Roberts has a lot of growing up to do as he continues his career.

As the next game comes up against LAFC, Dallas has a lot to work on before playing the current best team in MLS. With a 21+ goal difference and only losing one game so far, LAFC has a clear advantage to FC Dallas. However, Luchi Gonzalez definitely has some tricks up his sleeve, and seeing Dallas take LAFC head on will be an enjoyable game nonetheless.